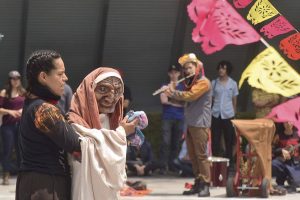 On Sunday, August 11 at 2:00pm, La Quinta Teatro will give a free public performance of their unique, high energy street theater in the garden at the Mexican Heritage Plaza. Live music will be provided by local musicians. After the performance, the members of La Quinta Teatro will invite the community to express their own creativity through participatory activities like mask making, puppet making, painting, and interactive activities involving music and sound.

La Quinta Teatro member Viridiana Mendoza explains the power of creativity in communities: “We seek for truthful and unique impact in every occasion by proposing actions and stimulus in each location we visit, that allow the active listening and participation of the people that consolidate each community achieving not only their integration to creative processes but to gain strength in the ways they communicate, think and create as a community.”

La Quinta Teatro’s visit to San José will also include a series of participatory workshops. For more information, visit www.teatrovision.org/raices.

All of the events during La Quinta Teatro’s visit to San José will contribute to the development of a new work of theater that Teatro Visión and La Quinta Teatro are creating together with creative input from communities in San José and Mexico City. Tentatively titled Raíces: el libro de los caminos / Roots: the book of journeys, the new work will focus on the idea of migration as a boundless journey. It is scheduled to premiere in the summer of 2021. 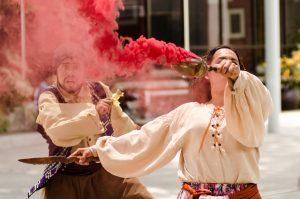 Support for Teatro Visión’s Raíces project also comes from a Hewlett Foundation 50 Arts Commission; The Map Fund, supported by the Doris Duke Charitable Foundation and the Andrew W. Mellon Foundation; the National Institute of Fine Arts and Literature of Mexico; and a Cultural Affairs grant from the City of San José.

Teatro Visión is a Chicanx theater company serving the Latinx and other diverse communities of the Santa Clara Valley and the greater San Francisco Bay Area. Teatro Visión’s mission is to create theater rooted in Chicanx and Latinx experiences to inspire the people of Santa Clara Valley and beyond to feel, think, and act to create a better world. Established in 1984, Teatro Visión has commissioned, developed, and produced over 60 plays. Learn more at: www.teatrovision.org.

La Quinta Teatro, led by director Salomón Santiago, is a street theater ensemble based in Mexico City and dedicated to the creation and production of open-air theater spectacles. Their work is characterized by the use of huge puppets and masks, whimsical costumes, and energetic music, inspired by diverse Latin American traditions. Their approach is grounded in community, activating public spaces such as markets, plazas, the subway, schools, and cultural institutions. Find them on Facebook: @LaQuintaTeatro.