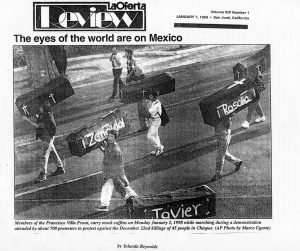 The recent cold blooded massacre of a group of Mayan Tzotzils in the small village of Acteal in the municipality of San Pedro de Chenalho, 12 miles north of the former capitol city of San Cristobal de Las Casas, in the south eastern state of Chiapas in Mexico has horriﬁed the world. Of the forty-five killed in this latest attack on the indigenous people of this very beautiful state, most (21) were women and (15) children. Twenty others, of whom eight were children, were reported to have been wounded. All were unarmed and, according to reports, had gathered in the village’s church to pray for peace. The surprise attack in Acteal took place at 11 a.m. on December 22.

Many of those who were killed were recent refugees who had ﬂed to Acteal to escape the attacks of roving bands of well-armed paramilitary groups in their home villages. The perpetrators, themselves Mayan Tzotzils havebeen identiﬁed as members of the groups known as the Red Masks, Peace, Justice, and Mira (Indigenous Revolutionary Anti-Zapatista Movement). They were described as clothed in blue uniforms that were identified as paramilitary garb. These groups are said to be well armed with AK47 riﬂes as well as 22 riﬂes and are almost universally believed to be responsible for the deaths of at least 300 people and the homelessness of another 7,000 people who ﬂed because of the terror in their communities.

La Oferta recently published an account of the expulsion of Father Riebe S.J., who had been serving a community in Chenalho for 22 years and who had helped to establish a school for the youth of the surrounding area of whom most were Mayan Tzotzils. He and a fellow Jesuit were never told how or in what way they have violated Mexican laws. Fr. Riebe thought that the only activity in which he was involved, besides the ministry, was his unswerving support of the school and for the education of Mayan youth.

Though there have been reported statements from governmental officials (from President Zedillo on down) that corruption will not be tolerated and democracy is to be practiced throughout Mexico, it appears that the local, state and federal governments lack the will or ability to calm the tensions and to bring peace and democracy to this area of Mexico. According to knowledgeable analysts the reason that a just and democratic peace is not a reality in the highlands is that at least some powerful forces within the PRI government have another plan in mind which does not include complying with the agreement signed, which it signed in November of 1996 with the Zapatistas in San Andres.

According to a December 29 communication from FZLN, the political arm of the Zapatistas, the assurances that there will be an official and thorough investigation of the massacre in Acteal is in fact, they say, intended to cover-up the reality of the “genocide” that the massacre in Acteal represents. This, the FZLN believes, is intended by the government to allay the concerns of foreign investors in Mexico and to continue, in Chiapas, to sustain the interests of the very rich and powerful oligarchy that controls all life and commerce in that state.

In fact, days following the massacre, the Attorney General Dr. Jorge Madrazo Cuellar explained that the killing in Acteal was the result of an inter family dispute, since the killers for the most part were residents of the same municipality. He did acknowledge local official complicity in not preventing the killings.

La Jornada columnist Barnardo Batiz, in his column entitled “Desaparación de Poderes” writes that, if such, is the case then it can be concluded that the power of the Federal government has been abrogated and that the Mexican Constitution provides for the restoration of the State’s powers and responsibilities in such a situation. Batiz contends that Section V of Article 76 allows for the Senate to appoint a replacement, when the state and local government cannot or will not respect the laws of the land, as appears to be the situation in Chiapas.

Before the civil rights movement in the United States, several Governors in this country acted with impunity toward black people until those Governors were over-ruled by the federal government in the early 60’s and the rights of citizenry for all, regardless of race, were restored. Eventually such governors and like-minded politicians were thrown out of office in those states.

The Zapatistas, whose most noted spokesperson is Sub-comandante Marcos, appeared on the world scene in January of 1994 when they rose up in arms to protest against the long years of exploitation and abuse of the indigenous community of Chiapas by wealthy land owners, in complicity with the ruling government (PR1). According to Fr. Riebe, approximately 18 powerful families control the political and economic life of Chiapas.

According to the overwhelming opinion of human rights groups, religious leaders and most media in that area, the December massacre was planned and instigated with the help of the local mayor of Chenalho and with the complicity of the Governor of the State, Cesar Ruiz Ferro.

El Proceso journalist Carlos Montemayor, writes that the massacre in Acteal is not the first of such events in Chiapas but is rather part of a series of massacres that have occurred over many years. He also reminds the readers of the recent killing of 17 campesinos in Aguas Blancas in the state of Guerrero on June 28 of 1995. President Zedillo, in that case, asked for the Mexican Supreme Court to intervene in the investigation of those killings. The governor of the State, Ruben Figueroa, was forced to resign following the investigation. Montemayor points to the lack of similar action by Zedillo as supporting the widely held belief that the government (PRI) leadership supports a “cynical…strategy to undermine Zapatista support among many of the people in Chiapas”.

Ben Garza, a long-time resident of San Jose and an advocate of democracy in Mexico, says, “This (the massacre in Acteal) is not an isolated event. This is a conscious campaign by the PRI government and (this event) is a continuation of the Aguas Blancas massacre.”

He adds, “Official spokespersons such as Emilio Chauyffet, the former Mexican Minister of the Interior, are trying to make people believe that this is a conﬂict between families and over differences of religious beliefs, but their is no religious group that would advocate such an action on the eve of Christmas. This violent event was a premeditated act. This massacre demonstrates that this government has no respect for human rights”. “Note”, says Garza, “in Mexico, there is no Ministry of Human Rights.”

The SIDIDH (Servicio Diario de Información de Derechos Humanos en Mexico – a Mexico based human rights group) has issued a set of demands that must be met in order to restore the rule of law in Chiapas and to curtail human rights abuses in that state.

Among these demands are: “that immediate steps be taken to respect the civil rights of the people residing in La Realidad, Chiapas and in the other areas of conﬂict in  Mexico; that an, in depth, true and impartial investigation be conducted immediately regarding the reported events with the intent of bringing to justice those responsible; that witnesses and survivors be protected from retaliation to justice for testifying and reporting on the human rights abuses; an end or attempt at provoking armed responses to the abuse of indigenous people of these areas; that humanitarian programs and services be provided to the victims of the frightening terror in their respective communities, eg. Polho, Chanalho, and Oventec, as well as safety for those who are engaged in providing emergency help to the people of these communities, and that the Federal government declare unequivocally its condemnation of the growing incidence of brutality and violence in the state of Chiapas at the hands of paramilitary groups and the increased presence of military troops in the communities sympathetic to the Zapatistas.”

The Zapatistas have obviously laid down their arms since their attack on San Cristobal de Las Casas in January of 1994. Their campaign since then has been to seek the participation of civil society in bringing about peace, justice and dignity into the lives of the long suffering Mayan and indigenous people of Mexico. Long-time observers say that the Chiapas state and local ruling government have tried unsuccessfully to provoke the Zapatistas to take up arms as an excuse to annihilate them in ablaze of gunﬁre.

There were reports, last week, that the military was closing in on the headquarters of the Zapatistas, thought to be in the area of Las Magaritas to the south and east of San Cristobal. Troop movement was verified in the area but their stay in the area was short and non-violent and did not result in the capture of sub-Comandante Marcos. It has been said that he is to be captured “dead or alive.”

The Nuevo Amanecer Press—Europa (an internet web page) reports that it has conﬁrmed rumors that Mexican Lt. Col. Julian Guerrero Barrios, the commander in charge in Chiapas, is a graduate of the notorious contra insurgency training program provided by the US Army’s School of the Americas at Fort Bragg, GA. This school has trained many of the troops responsible for similar abuses in Nicaragua, El Salvador, Guatemala, Nicaragua and in other Latin American countries.

The reputed master mind of the Chiapas counter insurgency strategy for Chiapas according to El Nuevo Amanecer is General Mario Rehan Castillo Fernandez, who was also trained at Fort Bragg. El Nuevo Amanecer web newsletter points out that, “the two biggest recipients of US military aid in Latin America, Colombia and Mexico, are also the two Latin American countries with the greatest number of massacres carried out by the paramilitary organization connected with their respective armed forces.”

The practice of using hired guns from indigenous groups to attack peasants seeking reform of a corrupt system has been employed extensively in Central America and other countries.

Cuauhtemoc Cardenas, now mayor of Mexico City and the founder of the opposition party PRD and its most recognized leader of that party says of the massacre in Acteal that an in-depth investigation of the events in Chiapas must be conducted. Joining in the recent demonstration at the Angel de La Independencia in Mexico City, Cardenas has strongly condemned the acts of terror involving hostage taking and the arbitrary arrest of civilians in Chiapas.

Huge demonstrations of protest have been held in France and Spain. Friday, January 9, there will be a major demonstration at noon 1 in San Jose at the Mexican Consulate on 2nd Street.

President Zedillo and progressive elements of the present government have praised democracy and denounced terrorist acts. This is their last chance, with the whole world watching, to prove that they mean what they say and that the entire PRI is not backing a local group of reactionary oligarchs. What they do will establish their true position for all the world to see.