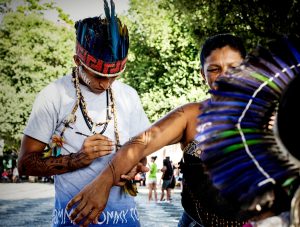 Sao Paulo, Jul 28 (efe-epa).- Authorities are investigating the murder of a leader of the Waiapi indigenous group by armed miners in Amapa, a state in Brazil’s northern Amazon region, the National Indian Foundation (FUNAI) said Sunday.


Federal Police officers and special response units went to the crime scene to investigate and “guarantee the security of the indigenous (people),” the FUNAI said.


Initial reports said the murder occurred last Wednesday but was not reported until Saturday.


“For now, there are no reports of conflicts even though a death has been confirmed, of which there are no details about the circumstances,” the FUNAI, an agency of the Family, Women and Human Rights Ministry headed by Damares Alves, said.


About 50 artisanal miners occupied protected lands belonging to the Waiapi, forcing some members of the indigenous group to flee to a nearby village, Sen. Randolfe Rodrigues said.


Nearly 1,300 Waiapis live in the western section of Amapa in an area near the border with Para state.


The Waiapi lands are the only indigenous areas in Brazil where gold mining is allowed.


Some Waiapi engage in sustainable gold mining, but the industry attracts miners to the area who are looking to extract the precious metal illegally.


The Folha de Sao Paulo newspaper reported that this was the first attempt by artisanal miners to occupy Waiapi lands in decades.


The incident comes amid calls by President Jair Bolsonaro for Brazil to work with other countries to “exploit” the mineral wealth in the world’s largest tropical forest.


“Brazil is ours, the Amazon is ours,” the president said during a military ceremony on Saturday.


Bolsonaro, an army reserve captain and leader of the extreme right in Brazil, often criticizes environmental groups and other non-governmental organizations involved in what he calls the “industry of setting boundaries for indigenous lands,” blaming previous administrations for implementing policies that allowed these practices.


The president has also questioned reports about deforestation in the Brazilian Amazon.


A recent preliminary estimate by the National Space Research Council (INPE) found that deforestation had grown 88.4 percent in the Amazon in June, compared to June 2018. EFE