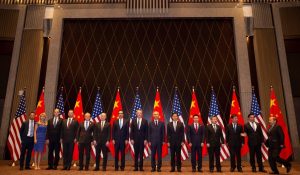 Washington, Jul 31 (EFE).- The US government said Wednesday that “the Chinese side confirmed their commitment to increase purchases of United States agricultural exports” in the latest round of trade negotiations, which will resume in Washington in September.

A team led by US Trade Representative Robert Lighthizer and Treasury Secretary Steven Mnuchin spent Tuesday and Wednesday negotiating in Shanghai with a high-level Chinese delegation headed by Vice Premier Liu He.

The latest round of trade talks did not result in an agreement, but the White House said the negotiations were positive.

“The meetings were constructive, and we expect negotiations on an enforceable trade deal to continue in Washington, D.C., in early September,” the White House said.

On Tuesday, President Donald Trump criticized China’s approach to the negotiations, saying that Chinese officials “always change the deal in the end to their benefit.”

“China is doing very badly, worst year in 27 – was supposed to start buying our agricultural product now – no signs that they are doing so. That is the problem with China, they just don’t come through,” the president said in a series of Twitter posts on the same day that the US and Chinese negotiators met for a new round of trade negotiations.

This week’s talks in Shanghai were the first high-level negotiations since June 29, when Trump and his Chinese counterpart, Xi Jinping, met on the sidelines of the G20 Summit in Osaka, Japan.

The world’s two largest economic powers have been engaged in a trade war for months, leveling allegations at each other and slapping tariffs on imports.

In May, Trump imposed a 25 percent tariff on Chinese imports worth $200 billion in response to the lack of progress in reaching a trade deal with Beijing.
China, for its part, retaliated by slapping tariffs on US imports worth $60 billion.

Trump later threatened to impose tariffs ranging from 10 percent to 25 percent on another $325 billion of Chinese imports, causing concern in financial markets and the business community due to the possible effect on consumer spending, which accounts for about two-thirds of US economic activity.

In Osaka, Trump and Xi agreed to a truce in the trade war, with Washington holding off on imposing new tariffs on China and allowing US companies to sell products to tech giant Huawei.

The US government banned Huawei from selling its products in the country on national security grounds in May, ratcheting up trade tensions.

The Trump administration later said that Huawei could resume selling some tech products on Aug. 19.

The trade tensions between Washington and Beijing are rooted in the large deficits posted by the United States with China.

In 2018, the United States posted a trade deficit of $419 billion with China due, largely, to the fact that US exports to Asia’s largest economy totaled just $120 billion, while American imports from China reached $540 billion.

During the first five months of 2019, the US trade deficit with China totaled $137 billion. EFE