In East Coast Center receives accolades from near and far 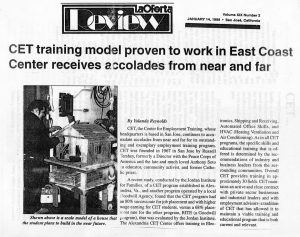 CET, the Center for Employment Training, whose headquarters is based in San Jose, continues to accumulate accolades from near and far for its outstanding and exemplary employment training program. CET was founded in 1967 in San Jose by Russell Tershey, formerly a Director with the Peace Corps of America and the late and much loved Anthony Soto an educator, community activist, and former Catholic priest.

A recent study, conducted by the Jordan Institute for Families, of a CET program established in Alexandria, Va., and another program operated by a local Goodwill Agency, found that the CET program had an 80% success rate for job placement and with higher wage earning for CET students, versus a 68% placement rate for the other program, RITE (a Goodwill program), that was evaluated by the Jordan Institute. The Alexandria CET Center offers training in Electronics, Shipping and Receiving, Automated Office Skills, and HVAC (Heating Ventilation and Air Conditioning). As in all CET programs, the speciﬁc skills and educational training that is offered is determined by the recommendations of industry and business leaders from the surrounding communities. Overall CET provides training in approximately 30 ﬁelds. CET maintains an active and close contract with private sector businesses and industrial leaders and with employment advisors- a tradition of CET that has allowed it to maintain a viable training and educational program that is both current and relevant.

The Jordan Institute researchers cited several factors in the CET program that are likely to be responsible for it’s higher success rate for job placement of students compared “(to) any job training program that (they) have (previously) evaluated.” These factors include more services related to job training preparation and the actual skill training at CET and a greater emphasis on employment, which gives the “participant (the) ability to meet the financial needs of their families.” That is, placement is made to jobs that offer beneﬁts and ‘living wages.’

In an August 18, 1997, Time magazine article entitled, “Tens of Thousands Off the Dole and On The Job,” CET is given as an example of a program that successfully prepares welfare recipients for jobs. CET trainees, they point out, are trained to hold jobs, “ranging from that of executive secretary, to shop inspector, to hotel manager. They emphasize that the CET training model is “market drives (thus) providing truly qualified workers for companies with real needs.

Though the recent reform in welfare have resulted in some financial problems for CET, Mr. Tershey explains that those problems are slowly resolving themselves by a combination: some consolidations (5) and the better handle on and understanding of the new funding mechanisms and processes required to meet the on-going needs of those who seek employment while also providing qualiﬁed and well trained workers for the actual industry and business jobs.

CET was also recently cited in another article, regarding the national emphasis on employment for those receiving welfare assistance, entitled “Ready, CET, Go.” In this Feb. 19 article for the monthly publication, Techniques, the author, Richard Greenberg, writes that, despite CET’s client base, “it has trained and nurtured some 70,000 clients, many of whom have ﬂourished on the job.” Of their clients, many are from “the hardest to serve of all job seekers (who) are low income, single parents, often with little formal schooling, training or work experience. Many (of whom speak little or no English and some are illiterate. (And) including at-risk youth, ex-convicts, migrant laborers and displaced workers.”

Greenberg adds, “CET has served this client base so well that the US Department of Labor has seen fit to provide nearly $57 million in grants since 1992 to develop clones of the operation throughout the United States.”

CET obtains most of the funds for its training program from the federal government, state, and local governments, including a variety of programs designed to reduce unemployment. Approximately 65% of CET’s funding comes from the Federal JTPA (Job Training Partnership Act).

Unique among training programs, a client/trainee is not considered a “graduate” until they have found employment. Greenberg points out that most CET centers are accredited by the Western Association of Schools and College in a process that requires a thorough review and evaluation of their programs, including teacher preparation and effectiveness.

Besides meeting such stringent standards as those required for WASC accreditation, another comparative evaluation and report on four major welfare to work programs was conducted by the Rockefeller Foundation in 1990. In that study, it was determined that CET was the “outstanding job training program.” That report launched CET to worldwide fame. At that time, La Oferta published an article which highlighted this unique honor and distinction that was bestowed on CET. The San Jose community is very proud of CET and the outstanding service it provides to those seeking an opportunity to be independent and to adequately provide for themselves and their families.

According to Greenberg, CET graduate trainees increase their earnings from an average $6.528 per year to $15,175 after graduation. That, Greenberg points out, is a 142% increase in earnings.

Ermelinda Sapien, the Executive Director of the San Jose CET, explained that, though there had been a shortfall of funds at CET months ago, that situation is no longer critical and, even so, the training opportunities have remained constant, with the usual enrollment of 500 students in San Jose. The average enrollment at the other 42 CET centers under the San Jose management is approximately 250 each year.

Of the recent ﬁscal concern, Ms. Sapien adds, “The CET model was not affected in any way. We do not compromise on the design because that is what works.”

As concern mounts for the difficulties confronting public education and workforce needs essential for the continued prosperity and stability of the nation, programs such as CET are vital. Perhaps elements of CET’s delivery of education are transferable to the academic experience of school children in order to inspire greater appreciation for the value of learning and thereby help improve retention and success in the nation’s public schools.

CET is open year around from morning to evening and they frequently present programs to which the general public is invited. On Jan. 16, 1998, there will be a special celebration at 701 Vine Street to honor the newly appointed Bishop in Sacramento, Fr. Richard Garcia. Until his appointment he had been serving as a member of the CET Board of Directors, among his other clerical duties in the area. A mass at 2 p.m. will precede the reception.

For more information on CET, the telephone number is 287-7924. © La Oferta Newspaper.