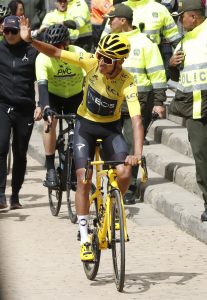 
Zipaquira, Colombia, Aug 7 (EFE).- August 7, 2019, will be remembered as the day on which the Colombian town of Zipaquira, located less than 40 kilometers (25 miles) from Bogota, threw itself at the feet of its most illustrious son, 22-year-old Egan Bernal, who recently won the Tour de France cycling marathon, the first Latin American to do so.


The young, but powerful, cyclist – fresh from his July 28 victory in the iconic race – arrived in Bogota on Monday and was transported from there by police helicopter to Zipaquira, a town in which he was not born but which has been his home for virtually his entire life.


Cramming the streets on which he once played were thousands of local residents – children, teens and adults of all ages – who gave him a hero’s welcome wearing replicas of the yellow jersey he had donned for winning the Tour de France, waving flags, holding signs and displaying t-shirts of the Colombian national soccer team.


In the crowd were his relatives, who he said have been his main support group as he has won assorted cycling championships in France, California and Colombia.


One of those relatives was his grandfather, Alvaro Julio Bernal, who has lived in Zipaquira since he was a young man and could not hide the pride he felt for his grandson.


“I think that this is not only a Colombian thing, but also on the world level. (Egan) performed a very beautiful deed, because everyone is saying that he’s ‘so young and already got that title.’ The only Colombian who’s done that,” he told EFE grinning broadly.


On the streets of the town, previously known for having the world’s only cathedral made of salt, Bernal’s image was everywhere in evidence, on every street corner in the form of signs bearing his name, photos or posters with congratulations.


Artists Luis Carlos Cifuentes and Emerson Caceres painted a mural in which Bernal appears wearing the yellow jersey and with the caption “The pride of my homeland,” an allusion to the song that Carlos Vives composed for the country’s cyclists in 2017.


At the wall bearing the mural, many people stopped to take a photo before heading to the Plaza de los Comuneros, where the tribute ceremony was held for the town’s favorite son.


To welcome him, town authorities set up a stage and space for 8,000 people, who jammed the plaza and began chanting “Egan, Egan, Egan!”


One of those who came to the event was Mauricio Soler, a Colombian cyclist who in 2007 won the mountain leg of the Tour de France but was forced to retire from the sport four years later after a crash during the Tour de Suisse in Switzerland in which he almost lost his life.


“This is a dream. We’ve been hoping for it for some time and now a Colombian can wear the yellow jersey … It gives us great pride to have Egan as a champion,” Soler told EFE.


Bernal arrived on the plaza to wild cheering riding a bicycle and wearing the yellow jersey about 10 am. He raised his arms and smiled widely as the event progressed, holding a press conference and presenting the yellow jersey to the Colombian Cycling Federation and the white jersey he won for being the best young rider on the Tour to Fabio Rodriguez, his first trainer.


Bernal also took advantage of the ceremony to call for a moment of silence in memory of Belgian cyclist Bjorn Lambrechet, who died on Monday after a terrible crash during the Tour of Poland.