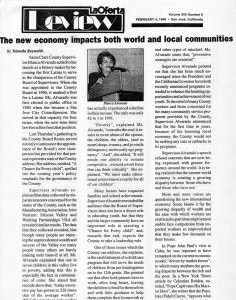 Santa Clara County Supervisor Blanca Alvarado added to her laurels as a history maker by becoming the first Latina to serve as the chairperson of the County Board of Supervisors. When she was appointed to the County Board in 1996, it marked a ﬁrst for a Latina. Ms. Alvarado was ﬁrst elected to public office in 1980 when she became a San Jose City Councilperson. She served in that capacity for four terms, when the new term limit law forced her from that position.

Last Thursday’s gathering in the County Board Room served not only to announce the appointment of the Board’s new chair-person but provided for that person to present a state of the County address. Her address, entitled, “A Chance for Every child,” spelled out the coming year’s policy emphasis for the governance of the County.

Supervisor Alvarado explained that data collected by disparate interests concerned for the status of the County, such as the Manufacturing Association, Joint Venture: Silicon Valley and Working Partnerships USA all revealed similar results. The data that they collected revealed, that though many people are enjoying the unprecedented wealth and success of the Valley too many people many others are barely making ends meet-if at all. Ms. Alvarado explained that one in seven children in this valley live in poverty, adding that this is especially the fact in communities of color. She stated that records show that, “today executive pay has grown to 220 times that of the average worker”. While the American male worker has actually experienced a decline in their income. The ratio was only 42 to 1 in 1991.

“Poverty”, explained Ms. Alvarado, “corrodes the soul-it results in more abuse of the spouse, the children, the elders, (and in more) drugs, truancy, and juvenile delinquency and in early age pregnancy.” “And”, she added, “It will erode our ability to remain competitive…we need a work force that can think critically.” She explained, “We must make educational achievement a reality for all of our children.”

Many factors have impacted families and school achievement, Supervisor Alvarado reminded the audience that the Board of Supervisors does not have a direct role in educating youth, but that they and the larger community have an important role in assuring a “Chance for Every child”, and, towards that end, expects the County to take a leadership role.

One of those issues which the County can address, she explains, is the establishment of a child care program that will serve the needs of children from pre-kindergarten on to the 12th grade. She pointed out that often both parents have to work, often long hours, leaving the children to fend for themselves and with little guidance to help them complete their homework or from becoming involved in gangs and other types of mischief. Ms. Alvarado states that, “preventive strategies are essential.”

Supervisor Alvarado pointed out that she has been much encouraged since the President and the California Governor have both recently announced programs intended to enhance the learning opportunities and achievement of our youth. To the relief of many County workers and those concerned for the many community service programs provided by the County, Supervisor Alvarado announced that for the ﬁrst time in years, because of the booming local economy, the County would not be making any cuts or cutbacks in its programs.

Supervisor Alvarado’s speech echoed concerns that are now being expressed with greater frequency around the world. It is being realized that the current world economy is creating a growing disparity between ‘those who have and those who have not.

More and more voices are questioning the new international economy. Some blame it for the growing disparity of wealth and the ease with which workers are restricted to part time employment and/or face competition from imported workers so impoverished that they make few demands on their bosses.

In Pope John Paul’s visit to Cuba, he was reported to have remarked on the current economic model, “driven by market forces,” to which many attribute the growing disparity between the rich and the poor. In a New York Times article by Celestine Bohlen, entitled, “Pope Captivates His Marxist Host,” she writes that the Pope, like (Fidel) Castro, “opposes what neoliberalism which subordinates the human being to blind market forces.” She adds, ‘‘….the Pope speaking to reporters, said that neither system (Marxist or Capitalist) is satisfactory.” Bohlen quotes the Pope to have said, “I always say we have to ﬁnd a just solution.”

The neoliberal economic model is much at the heart of the heightened dispute and problems in Chiapas, Mexico, where multinational interests, in concert with local Chiapaneco economic interests, seek the removal of the indigenous communities who, they see, as an impediment towards exploiting the signiﬁcant natural resource, oil, gas and hydroelectric power, that are available in the area of dispute and which is the historic home of the Mayan Indian people. Though Silicon Valley is far from the state of Chiapas, market forces have here evolved to create a relatively large work force that is often employed on a temporary or part time basis. Many of these workers are not provided with health care or other benefits.

Most companies and even government is ‘downsizing’ and contracting out the work of departments that were eliminated. The work is often contracted out to companies that offer lower salaries and benefits to their workers in order to secure the contract. Too many times, working conditions and environmental pollution are overlooked in order to maximize proﬁts. In the meantime, not only people (families) are negatively impacted but so is the environment. In some instances, the worker’s health is ruined, as is that of whole communities nearby, but so too others are impacted who have even died from improper and cheaper food processing. The search for maximum proﬁts has affected almost every aspect of today’s life.

In a recent article by Eduardo Galeano in La Jornada, entitled “Los Trabajos y los Miedos” (Employment and Fears),” he writes that fear is gnawing at the heals of the world’s people as they come to the 21st century. Their fears, he says, include the loss of their jobs, loss of money, loss of food, and that there is no known ritual or spirit power that can protect them from such losses.

In a powerful and elegantly presented discourse, Galeano describes the fears of the populace and the ﬁerce competition that is going on worldwide to attract multi-national companies who demand ever more concessions, that ignore the plight of the worker and the impact these companies will likely have on the environment.

He writes that, presidents no longer govern nations rather, he says, it is fear that governs. To illustrate the dismal pay offered for products produced in developing countries. Galeano points out that, in 1995, the GAP stores sold shirts of $20 in the US that were made in El Salvador for which the workers there were paid 18 cents for each shirt. For the most part, the garment workers in these factories were young females and were expected to put in 14 hour days, he adds. He writes that there were complaints and, for that, 250 of the workers were ﬁred. The workers then went on strike. Some were killed, others were beaten. By the end of 1995, Galeano writes, GAP announced it was moving its garment factory to Asia.

While we in America are very privileged compared to many countries, the world is increasingly interconnected and their problems will eventually be felt here as well.