Juchitan de Zaragoza, Mexico, Aug 11 (efe-epa).- On the Isthmus of Tehuantepec, in southern Mexico, it is impossible to guess by simply looking how many wind turbines have been erected over thousands of hectares. But thanks to the wind energy business, in the surrounding area the low-income communities have been resurging economically in recent years.

As a result of the social projects launched by various energy companies, municipalities like Santo Domingo Ingenio, which live surrounded by these majestic towers with their huge propellers that generate clean energy, are providing local residents with access to better medical facilities, electricity and better schools. 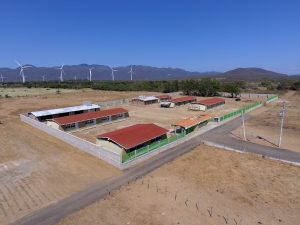 On a visit to Santo Domingo Ingenio, Mayor Amelia Rios told EFE on Sunday that the companies that generate wind energy have done much to pull the town out of its former backwardness.

The small community is located in Oaxaca, one of Mexico’s poorest states, but its economy has been helped significantly by the actions of Iberdrola Mexico.

Rios said she was very satisfied with the arrangement, specifically because “they’ve made contributions to the schools, which is very important.”

“We had the idea of being a sustainable municipality and we’re starting to do that thanks to the social contribution – the Casa de Cultura project was funded with the 2018 contribution – and the truth is that we’re delighted,” she said.

During a visit by EFE to the town’s Casa de la Cultura, a children’s orchestra played wind and percussion instruments, one of the many activities being carried out since the building was bought with aid from the company. According to Rios, the building “was a request by the public.”

She said that culture is essential and that “a child who has this opportunity will have difficulty devoting himself to doing bad things,” like criminal activities.

In 2017, the town began signing a memorandum of understanding with different energy firms operating wind parks on the isthmus.

“In the memorandum, each company makes a contribution, and those funds have helped us not only with infrastructure, but also to implement social programs,” she said.

The stressed that, thanks to this support, “in the town, 10 social programs have been implemented that range from providing 1,500 monthly distributions to vulnerable groups to providing school items” at the start of classes.

In addition, support has been provided to give more than 1,000 schoolchildren breakfast, medical checkups and free dental care, along with access to potable water at no charge.

“Those resources that the companies provide serve to show the people that they benefit from the installation of those wind parks,” she said.

Before the arrival of the wind farms, the mayor said that Santo Domingo Ingenio lived from the sugar industry, but when the sugar operations went bust 10 years ago the wind parks began moving in.

The director of the La Ventosa wind park, Ignacio Sanchez, told EFE during a visit to the site that he has 94 wind turbines in operation, each one standing 44 meters (144 feet) high and the total power generated by them is 101 megawatts, enough to supply several cities. He said that just one wind turbine can provide enough power for a whole neighborhood.

Sanchez added that there are about 3,000 wind turbines on the isthmus, the narrowest part of the country between the Pacific Ocean and the Gulf of Mexico, which is one of Mexico’s windiest zones.