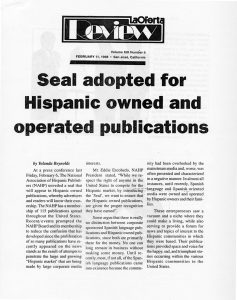 At a press conference last Friday, February 6, The National Association of Hispanic Publishers (NAHP) unveiled a seal that will appear in Hispanic owned publications, whereby advertisers and readers will know their ownership. The NAHP has a membership of 115 publications spread throughout the United States. Recent events prompted the NAHP Board and its membership to reduce the confusion that has developed since the proliferation of so many publications have recently appeared on the news

stands as the result of attempts to penetrate the large and growing “Hispanic market” that are being made by large corporate media interests.

Mr. Eddie Escobedo, NAHP President stated, “While we respect the right of anyone in the United States to compete for the Hispanic market, by introducing the ‘Seal,’ we want to ensure that the Hispanic owned publications, are given the proper recognition they have earned.”

Some argue that there is really no distinction between corporate sponsored Spanish language publications and Hispanic owned publications, since both are primarily there for the money. No one can long remain in business without making some money. Until recently, most, if not all, of the Spanish language publications came into existence because the community had been overlooked by the mainstream media and, worse, was often presented and characterized in a negative manner. In almost all instances, until recently, Spanish oriented media were owned and operated by Hispanic owners and their families.

These entrepreneurs saw a vacuum and a niche where they could make a living, while also serving to provide a forum for news and topics of interest to the Hispanic communities in which they were based. Their publications provided space and voice for the happy, sad, and triumphant stories occurring within the various Hispanic communities in the United States.

Kirk Whisler, whose children are of Mexican heritage, was the founder of NAHP. The NAHP was founded in 1982 and, with its 115 Spanish language print media membership, has a combined circulation of over 7 million. A few are daily publications, but the majority are weeklies. Some publish every other week or monthly and NAHP includes member publications from states in the east, north, south and west of the United States.

Until recently the major corporate companies showing interest in the Latino/Hispanic community have been primarily those involved in selling liquor and cigarettes. Within the last ten years, however, other major corporations have begun to realize that, within the Hispanic community there is a sizable amount of disposable income or such items as household goods and appliances, automobiles, movies and entertainment with distinct preferences for certain types of foods, etc.

Mr. Whisler produces and publishes the National Hispanic Media Directory, which provides valuable information for those interested in the Hispanic market.

collect an approximate advertising revenue of $395 million per year. He also pointed out that, of the $395 million spent on advertising, $313 million came from local advertisers.

Whisler also pointed that, of the many publications that have appeared, 53% were non-Hispanic startups and, of the group, 78% were out of business after 5 years. Based on that ﬁnding, Mr. Whisler concluded that non-Hispanic owned publications were more likely to fail. He explained, “pouring money into a Spanish language publication does not spell success”.

Mr. Escobedo, publisher of El Mundo in Las Vegas, Nevada, explains, “this ‘Seal’ recognizes the contributions made by Hispanic owned publications over the years. He said, “These community publications have recorded our communities achievements, its heroes, as well as our challenges. When

no one else would acknowledge the contributions of Hispanics, the Hispanic owned publications were there to bring the news to our community.”

The seal was developed by the Hispanic Association for Corporate Responsibility (HACR). The distinctive seal was designed by Ignacio Gomez, who was present for the unveiling of the seal at the press conference. Gomez explained that the Seal, with the proﬁles of a man and a woman, reflect the strength and contributions both bring to the community. He explained the design of the seal was an attempt to overcome the negative stereotype in which Hispanics/Latinos have been portrayed in the media, therefore his seal design portrays a “proud and Successful” Hispanic male and female.

At the Thursday press conference, NAHP Vice President Julie Rocha also announced that the NAHP would be opposing the Unz anti-bilingual initiative. NAHP members, both in California and across the country, she said, are committed to educating the community on this initiative. The Unz proposal is seen as anti-Hispanic Latino and a serious threat, as well to the academic success of Latino/Hispanic children.

NAHP President Eddie Escobedo stated that there would be editorials written in opposition to the Unz initiative, as well as articles. He added that the NAHP member publications will join in the effort to register 10 million new Hispanic/Latino voters who can, in turn, inﬂuence, in a very real way, such political initiatives as that proposed by Mr. Unz. © La Oferta Newspaper.