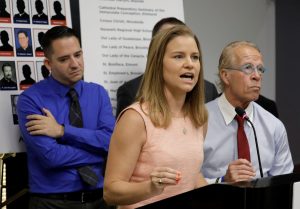 New York, Aug 14 (efe-epa).- A New York law office on Wednesday filed more than 250 lawsuits over sexual abuse of minors against the Catholic Church with the entry into force of the so-called “lookback window” allowing victims to sue for these crimes even if the statute of limitations has expired.


Jeff Anderson & Associates made public the 262 lawsuits in New York state at a press conference, where the chief partner – Jeff Anderson – said that “now is the time” to do something against the abusers and for the victims to confront members of the clergy and others connected with the Church who took advantage of them.


“This is a momentous time for courageous survivors who have waited so long for justice in New York,” said Anderson, whose law firm regularly represents victims of clergy sexual abuse.


“Why could the survivors do this, or why could we stand with them at this important time in New York? Because the Child Victims Act was passed into law. The Catholic bishops for 20 years have been in opposition to that and lobbying against it spending tens of millions of dollars” to ensure that such cases never came to light, Anderson said.


The law, approved in January and which entered into force on Wednesday, includes a “lookback window” of one year – until Aug. 14, 2020 – during which victims who did not file suit before against their abusers can do so now.


In addition, the text allows alleged victims of abuse to open civil cases up to the age of 55 and present criminal charges up to age 28, compared to the age 23 threshold allowed under the earlier law. 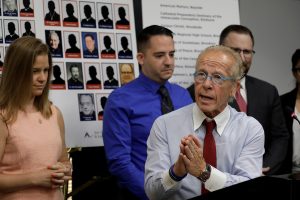 One of the survivors, Bridie Farrell, spoke at the press conference, saying that her fight to move the law forward had enabled her to get to know people who were abused and were not even aware of it.


“Our voices as survivors are finally … finally being heard,” said Farrell, 37, on Twitter adding that people had come up to her to tell her about abuse that they had suffered as children, although they did not identify it as sexual abuse at the time.


“Today, survivors like me and so many of us across New York can come forward and file a lawsuit to hold our abusers accountable and any institution that allowed this to happen,” she said at the press conference.


Another of the victims present at the press conference, Joseph Caramanno, who said he was abused by Msgr. John Paddack, emphasized that Wednesday is a “day of the light … and the truth” in contrast to the “very dark time in my life … when I was 16-17 years old.”


“Today is very important, it’s a big day,” he said, adding that “I never thought I would be able to be at (the place where I am now).”


Of the cases filed on Wednesday, 54 are against the archdiocese of the city of Manhattan, 36 were filed in Brooklyn and 19 in Rockville, a total of 109 lawsuits in lower New York state.


Another 84 lawsuits were filed in Buffalo, 30 in Rochester, 19 in Albany, 14 in Ogdensburg and 6 in Syracuse.


In all, 162 alleged abusers are mentioned as perpetrators of the abuse, much of which occurred in churches, although victims have claimed that they were also abused in day care centers and religious hospitals.