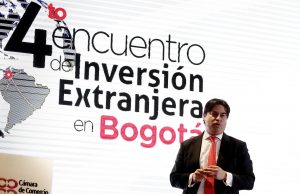 
Among the actors supporting the city’s strategy of attracting foreign investment is the “Invest in Bogota” agency with about 350 investment projects under way at present.


This year, the agency, which on Wednesday launched the “4th Foreign Investment Meeting in Bogota – Global Service Platform in Latin America,” has as its goal attracting 43 initiatives and increasing the $2 billion in foreign investment it has managed to bring to the Colombian capital since 2009, an effort that has created about 35,000 jobs.


“These investments have come from 47 countries in such diverse sectors as technology, services, infrastructure and movie and television production,” Invest in Bogota general director Juan Gabriel Perez told EFE.


The three main characteristics that Bogota has that make it an attractive city for foreign investment are the size of its economy, its strategic location and its human resource base.


The capital’s economy is as large as that of Ecuador and exceeds those of Uruguay, Paraguay and Panama, and Perez says it is “dynamic” and growing above the national 3 percent average with a GDP of about $10 billion.


The capital’s population is 4.6 million, exceeding the populations of other cities like Mexico City, Santiago, Buenos Aires and Quito, and 60 percent of it is devoted to services, 20 percent to trade and 10 percent to manufacturing.


The city is home to 57 percent of Colombia’s financial transactions, making it one of the most important such hubs in Latin America.


It is located in the center of the country and enjoys excellent air service with the third-largest passenger airport and largest cargo airport in Latin America.


Some 1,100 direct international flights from dozens of countries pass through the airport each week, operated by 24 airlines.


In the capital’s metro region, there are about 120 institutions of higher learning that turn out some 188,000 graduates, of whom 44,000 receive post-graduate degrees, each year.


Just under 43 percent of these graduates obtain their degrees in economics, administration and accounting, according to a study by the Colombian government’s Labor Observatory for Education (OLE) institute.


The sectors employing these graduates are mainly in the areas of real estate, hotel management, public administration and defense, trade, financial activities, education, manufacturing and social and health services.