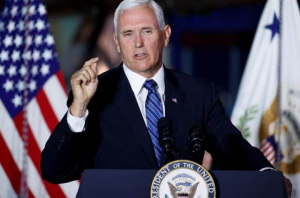 Washington, Aug 20 (EFE).- The United States on Aug. 29 will launch its previously announced Space Command, which will initially have just 87 people assigned to it, to carry out the Donald Trump administration’s plan to open up a “new era” in the country’s defense.

Vice President Mike Pence and the chairman of the Joint Chiefs of Staff, Gen. Joseph Dunford, made the announcement on Tuesday at the sixth meeting of the National Space Council.

“The United States Space Force will ensure that our nation is prepared to defend our people, defend our interests and to defend our values in the vast expanse of space and here on Earth with the technologies that will support our common defense for the vast reaches of outer space,” Pence said.

“Next week we will formally stand up the new unified combatant command that will be known as the United States Space Command,” Pence said at the National Air and Space Museum’s Steven F. Udvar-Hazy Center in Chantilly, Va.

The US Space Command is slated to be the military’s unified combatant command in charge of the country’s defense operations in space, and Air Force four-star Gen. John Raymond will be the first commander of the Space Force.

Pence said that the American people are ready for the “next chapter” in their history, an allusion to the space policy of the Trump administration, which has prioritized the return of US astronauts to the Moon in 2024 and making a mission to Mars a reality.

Pence said that the US had put an end to “decades” of budget cuts and reductions for space operations and had renewed the country’s commitment to human exploration of space and to going farther and faster into space than ever before.

On Feb. 19, Trump had said that the new military unit will be a division of the Air Force, as recommended by the Defense Department, but will eventually become a separate branch of the military.

The government has defined the Space Force as the sixth branch of the US Armed Forces – the others being the Army, Navy, Air Force, Marines and the Coast Guard – although for the time being it will fall under the umbrella of the Air Force.

During the same meeting, Dunford emphasized that the 87 people assigned – at this stage – to the new force will be tasked with issuing missile warnings and carrying out satellite operations, as well as providing space control and support.

Dunford said that the new force will put the US on the road to maintaining its “competitive advantage” in space.

Last April, the Defense Department said that the decision to put the Space Force under the control of the Air Force will help keep costs down for new military division.