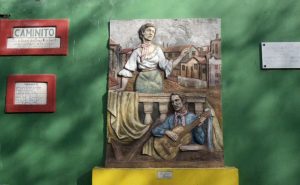 Buenos Aires, Aug 22 (EFE).- The striking colors of the emblematic “Caminito” street museum in Buenos Aires are once again dazzling visitors thanks to the restoration of the murals and sculptures that served as the inspiration for Juan de Dios Filiberto, Carlos Gardel and many other lovers of the tango.

Red, yellow, green and blue are the colors of the typical houses and structures along the Caminito, a 100-meter (yards) stretch of which has drawn painters, singers, tango dancers and many thousands of tourists and is one of the most-visited places in the Argentine capital.

The iconic street was immortalized in 1926 in the highly popular and still well-recognized tango number “Caminito,” written by Filiberto and sung by Gardel.

In October, it will be 60 years since the Caminito was named a “street museum,” and those tasked with its renovation want “the area to be completely restored” by that date, the secretary of the Proa Foundation’s board of directors, Elizabeth Torres, told EFE.

Her organization is the driving force behind the renovation, which is giving the Caminito the visual vitality already achieved by nearby streets in 2017 after a push by the Buenos Aires city government.

Now, a new coat of paint is brightening up the corner where Del Valle Iberlucea and Don Pedro de Mendoza streets intersect, where most of the visitors to the area start their tour.

In addition, the street’s colorful murals are being treated and the project includes reconditioning the bases of the sculptures and monuments in the Open Air Museum created by Argentine painter Benito Quinquela Martin. 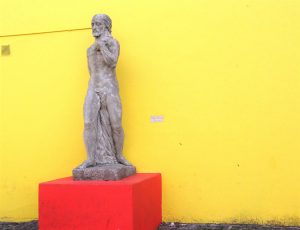 Luis Perlotti and Julio Cesar Vergottini are just a couple of the sculptors whose pieces have been restored.

Although various organizations have been involved in the project, Torres said that without the local residents in the La Boca neighborhood, reconditioning the zone would be much more complicated.

Proa Foundation representatives say that all the residents and artists in the neighborhood “at some point feel involved in some activity that’s under way” there.

To carry out the work within the scheduled time frame, Torres said that the plan for the project was coordinated among the neighborhood organizations and the city government.

After this project, one hopes that the restoration of the area will be maintained, and Torres added that “probably” the various organizations will look into creating an education program on the importance of the Caminito’s heritage.

However, she said that “the policies have to come a little bit from the state.”

“We private organizations can collaborate, bring our desires closer together and study possibilities such as how this can happen,” she said.

The entity requested the restoration as a joint project with the Benito Quinquela Martin Museum with the support of American Express via the Resources Foundation.

“We consider the Caminito to be an extension of the Quinquela Martin Museum. Caminito is one more artwork of the Quinquela,” said Victor Fernandez, the director of the museum created by the emblematic La Boca artist.

Quinquela Martin (1890-1977), well-known for his paintings of Buenos Aires, was one of those responsible for giving the Caminito its distinctive look, and that is why “the museum is always involved in anything having to do with adding value to the street,” Fernandez said.

“There’s a point at which Quinquela’s work comes off the canvas and begins to overflow into the neighborhood with the tools that he made his own,” the museum director said, adding that the painter worked with the characteristic colors in the district.

Fernandez said that “bringing out the (colors of the) Caminito is highlighting something, as Quinquela saw it, that is a very important part of Argentine cultural identify.”

“On the artistic level, the names that it has produced in the history of La Boca are fabulous and are a feature that gives the neighborhood its special characteristics,” Torres said.