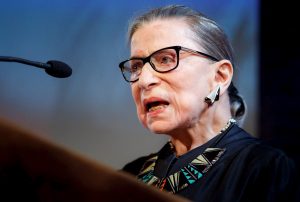 Washington, Aug 23 (efe-epa).- Progressive US Supreme Court Justice Ruth Bader Ginsburg, 86, has undergone radiation for a malignant tumor of the pancreas, for which she was recently operated; fortunately the disease has not spread to other parts of the body.

The treatment of focused radiation began last Aug. 5 and was administered in an outpatient manner to treat a pancreatic tumor that was detected for the first time following a routine blood checkup in early July and a biopsy on July 31.

As part of her treatment, a bile duct stent (an intravascular prosthesis used to keep a blocked vessel open) was applied.

“The tumor was treated definitively and there is no evidence of disease elsewhere in the body,” the statement added.

This is not the first time the justice has undergone surgery because of cancer, since in the past she has suffered cancer of the colon and the pancreas.

Ginsburg has served the last 25 years on the Supreme Court, where in 1993 she became the second woman in history to occupy a seat on the highest court in the land, after a career working on behalf of feminist causes and civil rights.

The justice’s health and her age have put the country on edge, particularly in the ranks of progressives, who fear that if Ginsburg leaves the Supreme Court her substitute will be named by Republican President Donald Trump, thus boosting even more the conservative majority.

The president and the Supreme Court justice have had a tense relationship since Ginsburg described him as a “faker” before the 2016 elections, a comment she had to take back and which led Trump to call for her resignation.

The Supreme Court is made up of nine justices with lifetime appointments, of whom five are currently conservatives and four are progressives. The justices are named by the president and later confirmed by the Senate, where Republicans also hold the majority.

Trump has nominated two justices in less than two years, an unusual pace for replacing them since they tend to remain in that position for decades.