Bogota, Aug 27 (efe-epa).- Jesus Abad Colorado has traveled Colombia like nobody else, documenting with his camera the armed conflict and the pain of its victims, most of them peasants and many of whom he revisits because he is convinced that they are the big losers in this violence.

“Over many years, I’ve seen that the … peasants of Colombia are the war’s big losers because the armies took everybody’s children, despoiled the land, took their lives,” he told EFE in an interview in Bogota. 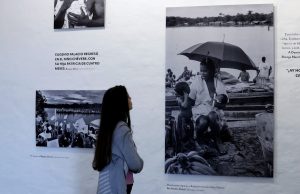 Those millions of victims of the violence among guerrillas, paramilitaries and the security forces are acknowledged in “El Testigo” (The Witness), a photographic anthology of more than 500 photos taken around the country over more than a quarter century by Colorado, who has become a national “voice of conscience.”

The exhibit – which since last October has been on display in four halls of the San Francisco Cloister, near the Casa de Nariño, Colombia’s government headquarters – has welcomed more than 700,000 visitors, including foreign authorities, and on Tuesday it will be inaugurated at Cali’s La Tertulia Museum.

“I don’t use photography to create hate or the thirst for revenge. Just the opposite, this exposition has become a milestone in Colombia’s history,” Colorado said, the living memory of the conflict who often receives groups of students who ask him “Why did all this happen? Why has it not ended?”

The exhibit complements the documentary “El Testigo, Cain y Abel,” directed by Great Britain’s Kate Horne, produced by Caracol Television and which has been available on Netflix since June.

Through Colorado’s lens, the production tells not only the story of the war between brothers in the conflict that took at least 261,619 lives, 82 percent of them civilians, but also their life stories, always from the point of view of the victims, showing with dignity that the violence could not kill them and make them statistics.

“When I take photos they’re not anonymous people, they’re people who have a history and, for me, it’s very important to be able to tell who I shared things with, if I was in the house of Juana, Debora, Telemina … if I accompanied a missionary team or if I was in the middle of an indigenous community where there was a leader who was murdered,” he said. 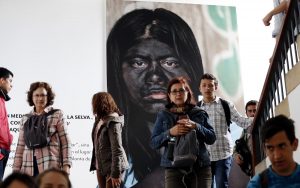 As a result of the links he created with the people featured in his stories, Colorado often retraces his steps and visits people he met at times of sadness to learn what has become of them, to photograph them again and to tell them they’re not alone.

“I have to speak to those who survive … whom I often see bowed down by sadness and by the war,” he said in explaining why he returns to places like the town of Bojaya, where at least 74 people died on May 2, 2002, when the leftist FARC rebels bombed the church in which they had taken refuge during combat between the guerrillas and paramilitaries.

His commitment to the victims ensures that one does not lose faith in Colombia’s finding the true peace it thought would come with the November 2016 peace accord signed between the government and the FARC, but which is sailing through stormy seas due to the “hatred” he says is being sowed in society by “the political class and many sectors of the Church.”

“To build peace in a country like ours it’s not enough just to (sign a peace pact) … One needs the whole society to participate … academia … the business community … the government,” he said.

Nevertheless, Colorado says that “Colombia today is a much better country than 10, 15 or 20 years ago,” but the peace pact has not prevented some 700 social leaders from being murdered over the past three years, according to some calculations.

“People abroad don’t know about the pain that the peasants have been feeling for many decades, the men and women of this country who are the ones who have paid for that hate and that violence that didn’t arise from among themselves, but (rather) from ideas and words that create divisions … because the words of a politician or a bishop in whatever church are just as dangerous as weapons are,” he said.