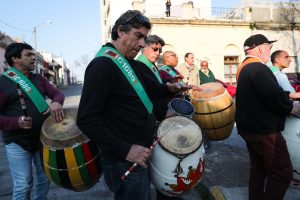 Montevideo, Aud 31 (EFE).- In the Association C1080 Cultural Center in the Barrio Sur (Southern District) of Montevideo, home of the famed C1080 song-and-dance troupe and the Mediomundo lunchroom, Japanese and African-Uruguayan cultures have merged at the heart of this downtown neighborhood.

The last days of August in Uruguay are known for scorching temperatures that precede the so-called Santa Rosa storm, a season that has coincided in 2019 with the inauguration of a renovated second floor at C1080 headquarters.

A fresh breeze was blowing and the afternoon sun still shone on the end of Curuguaty Street along the River Plate, when in Carlos Gardel Street at the heart of the Barrio Sur neighborhood appeared the line of candombe drummers beating out their rhythms.

Before they entered the building, dancing girls dressed in white with touches of orange and green, and who represent this well-known troupe in Carnival parades around Uruguay, moved to the beat of the drums.

Inside, the costumes of the Old Mother, the Herb Doctor and the Broomsman, typical characters of the Montevideo Carnival, were seen hanging underneath the stairway to the second floor, while on the way up was a black-and-white photo on the wall of a woman drying her clothes in the sun at the Mediomundo building.

Cuareim 1080 or C1080 was the name that Waldemar “Cachila” Silva, director and founder of the comparsa, chose for the cultural center, a reference to the street address of the Mediomundo building,” a typical apartment building where many Black families have lived since the last century. 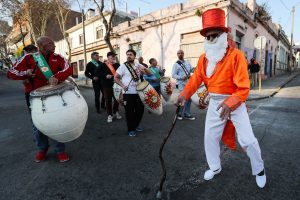 “Twenty years ago my wife Margarita Barrios and I had a dream: based on our history and culture we wanted to provide a facility for our community,” Silva said during the inauguration of the second floor of the establishment, in the presence of the Japanese ambassador to Uruguay, Tatsuhiro Shindo.

Silva is the son of a legendary figure, Juan Angel “Cacique” Silva, who managed the Mediomundo building in the 1950s and created the Morenada comparsa, one of the most famous Carnival troupes of the 20th century, through which he passed on to his son his love of candombe, the music and dance created by African Uruguayans.

Besides being the headquarters of the comparsa group, at C1080 dance and candombe workshops are held, space is lent to collectives in the neighborhood for their meetings, and the Mediomundo lunchroom there is open to children and young people of the area.

The presence of Japan at the neighborhood event was due to the Japanese embassy’s donation of $90,000 to the troupe to overhaul the building.

Shindo said he hoped this place “will inspire the development of the community like a lighthouse to the future” and that he is convinced that “doors will open to countless growth experiences for the entire community.”

Attending the inauguration of the renovated headquarters were the architect and former mayor of Montevideo, Mariano Arana, and composer Hugo Fatorusso, whose ties with Japanese culture come from his alliance with Japanese musician Yahiro Tomohiro in their “Two Orientals” tours.

Also on hand were artist Ago Paez Vilaro, daughter of the late artist Carlos Paez Vilaro, who lived at Mediomundo and was a member of the comparsa, experiences that have inspired his work and which introduced him to African-Uruguayan culture.

The place inaugurated this week is spacious and bright. In the back is a photo of Cacique watching a video of many Carnivals, with flags waving in the wind and with the glitter of sequins on the costumes reflecting the lights shining on Isla de Flores Street, the thoroughfare dividing the Barrio Sur neighborhood from Palermo.

“Like the cry of a race being born, like the bird that flies and at last is free,” begins the comparsa’s hymn, which then says “1080 is like that with its eternal magic, and so will my country be forever. We are the breed and blood of candombe, we are Barrio Sur, we are 1080.” EFE