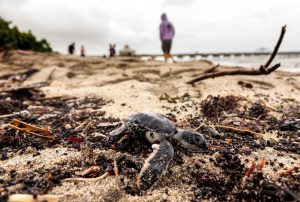 “There are questions about fatalities,” Dr. Hubert Minnis told a news conference at the headquarters of the National Emergency Management Agency (NEMA).

“Thus far, the Royal Bahamas Police Force has confirmed that there are five deaths in Abaco. Teams will go to Abaco as soon as possible for a full and proper assessment and identification,” the prime minister said.

Dorian made landfall Sunday in Elbow Cay, Abacos, as a Category 5 storm, making it the second most powerful Atlantic hurricane on record.

“The initial reports from Abaco is that the devastation is unprecedented and extensive,” Minnis said. “The images and videos we are seeing are heartbreaking.

“There is an extraordinary amount of flooding and damage to infrastructure,” he said, confirming that US Coast Guard personnel were already in Abaco working to rescue people trapped on roofs.

As the prime minister spoke, Dorian – now a Category 4 storm with maximum sustained winds of 230 km/h (145 mph) – continued to pound Grand Bahama Island, much of which was underwater amid a storm surge of 7 m (23 ft) above normal tide levels.

“We are in the midst of a historic tragedy in parts of our northern Bahamas,” Minnis said. “Our mission and focus now is search, rescue and recovery. I ask for your prayers for those in affected areas and for our first responders.”

Authorities in Grand Bahama said earlier Monday that efforts by first responders to rescue people trapped in the floods would have to wait until conditions improved.

“We know that there are number of people in Grand Bahama who are in serious distress. We will provide relief and assistance as soon as possible after the Met dept (meteorological department) has given the all clear,” the prime minister said at NEMA headquarters.

The US National Hurricane Center (NHC) said that Grand Bahama Island will continue to suffer the effects of the hurricane into Tuesday morning.

The storm’s position was unchanged from the previous NHC bulletin, issued at 18.00 GMT.

Videos of Grand Bahama posted on social media and broadcast on state-run ZNS TV show water above the roofs of most homes and residents described the level of damage as incalculable. 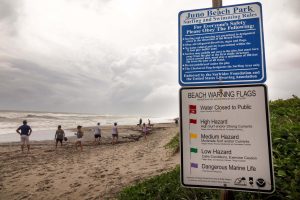 The network also aired footage of Foreign Minister Darren Henfield speaking from a government complex in Abaco that had been transformed into a makeshift shelter.

Bahamian media reported that a 7-year-old boy was the first fatality from Hurricane Dorian in the archipelago.

Eyewitness News Bahamas Press reported that the boy drowned in the storm surge in the Abaco Islands and his sister was listed as missing.

The Red Cross said that wells in the Abacos were contaminated by the storm surge, making the provision of drinking water a priority.

Initial estimates are that the powerful hurricane destroyed or severely damaged 13,000 dwellings.

As the storm battered the Abacos on Sunday, Minnis renewed his pleas for residents of Grand Bahama Island to evacuate while they still had time.

While Bahamian law does not give the government authority to order evacuations, Minnis said that as soon as parliament returns to work, he will ask lawmakers to approve legislation establishing mandatory evacuation.

Dorian is expected to resume moving to the west-northwest during the night before moving “dangerously close to the Florida east coast,” the NHC said.

The storm will skirt the Florida coast “through Wednesday evening and then move dangerously close to the Georgia and South Carolina coasts on Wednesday night and Thursday,” according to the NHC forecast.

A hurricane warning has been issued for the Florida east coast from Jupiter Inlet to Ponte Vedra Beach.