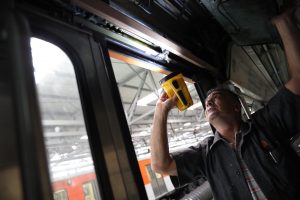 Mexico City, Sep 3 (EFE).- Instructions blasted over loudspeakers by the Collective Transport System (STC) – the Mexico City Metro – tell passengers not to get in the way of the doors closing when someone deliberately or accidentally keeps them open, even for a few seconds.

A single second lost alters the train’s schedule because the Mexican capital’s subway system is like a clock that allows no mistakes, and this Wednesday will have been keeping its trains running on time for 50 years.

As an example, on a normal day the 37 pink trains of the iconic Line 1 make 499 trips around its route between the Observatorio and Pantitlan subway stations, from the west to the east of the city.

“The mere fact that a train stays too long in a station forces us to slow down the trains coming behind it,” Vargas said.

Doors kept from closing by someone jumping on the train at the last minute, or a minor scuffle between passengers, are two of the most usual incidents that throw the train off schedule, adding up to slight delays.

The work of Vargas and his team at the control center in the historic downtown area is precisely to supervise how the subway is working by means of remote observation technology that permits control and regulation of traffic on the subway lines. 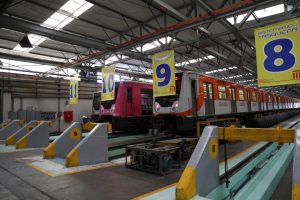 This metropolitan train – which mainly travels through underground tunnels and runs on electricity – closes down between 12:00 midnight and 5:00 am. It works every day of the year and when it rests, it is in fact undergoing indispensable mechanical maintenance and a thorough cleaning.

“We don’t forget that at times it has involved us in some pretty bad accidents, but those problems are resolved by specialized personnel,” Vargas said.

The central control manager said that the millions of passengers the subway transports daily and the 50 years of transportation it has provided Mexico City compared with its occasional flaws is a perfect reason to judge its service “excellent.”

The tech firm SinTrafico said in a 2018 report that the Mexico City Metro was involved in 125 inconveniences a month related to slow service, passenger overcrowding and minor defects.

But to keep the subway running like clockwork, maintenance in the workshop area is of particular importance.

According to records of the system, the subway trains go into maintenance every 12,500 kilometers.

Enrique Baeza of the Tasqueña workshop says the wagons are so resistant that in 2019 the MP68 trains, among the first to appear in Mexico, are still running.

And the 5 cents, or 5 pesos, that the Mexico City Metro charges for a ticket, makes it one of the cheapest rides in the world. EFE