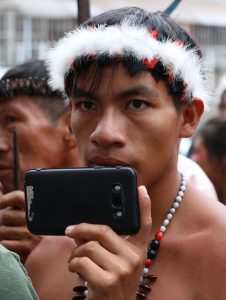 Quito, Sep 4 (EFE).- Representatives of Ecuador’s indigenous peoples on Wednesday staged a sit-in before the National Assembly building in Quito to demand that authorities enforce local and international legislation protecting their rights and the country’s environment.

Attired with plumes, straw belts, seed and bone collars, and with spears in hand, dozens of men and women with their faces painted – most of them from the Waorani tribe living in the Amazon region – participated in the demonstration at which they chanted slogans in their native languages “in defense of (their) land.”

The head of the confederation comprising 23 organizations and representing 11 Amazon nationalities said that the Brazilian government “speaks about the fire (in that country), but it doesn’t say how many peoples and nationalities are being affected in that territory and doesn’t make visible what it happening (there).”

Vargas referred to judicial rulings in favor of indigenous peoples in Ecuador’s jungle region, including the ruling last April by a provincial court in Pastaza, in the country’s northeastern region, on a protection request presented by the Waorani people against a petroleum exploitation bidding process.

The ruling set forth that a consultation on the matter with the members of the Indian community must be repeated and conform to international standards.

The Confeniae head also noted the complaints against public state bidding procedures regarding crude drilling and production in the territory of the Kichwa people of Sarayaku without their consent, which contravened a ruling by the European Court of Human Rights.

“In Ecuador, extraction is the worst enemy of the Amazon peoples and nationalities,” he said, citing another large-scale mining case that threatens indigenous communities in Zamora Chinchipe province.

Meanwhile, the president of the Waorani Nationality Coordination Council of Ecuador (Conconawep), Nemonte Nenquimo, demanded that the authorities comply with the court ruling and called on lawmakers to carry out their duties of monitoring the government.

“We’re going to be prepared and united with other Amazon nationalities in a single fist to demonstrate to the world that we must be respected,” said Nenquimo, adding that “our lives and those of our children depend on the Amazon.”

The protest on Wednesday was conducted before the Environment Ministry and on Thursday the demonstrators will show up in front of the Comptroller’s Office and the Constitutional Court in the Ecuadorian capital.

The gathering comes a day after the arrest of a judge accused of extortion, influence peddling and taking bribes in Pastaza, who had denied a motion by the indigenous community to block the construction of a hydroelectric plant.

Judge Aurelio Quito was denounced by a colleague and is said to have taken money from the construction firm in exchange for issuing favorable decisions, according to preliminary reports that he received $40,000 in cash.

Christian Aguinda, the president of a Kichwa community in Santa Clara parish, which includes 22 communities in Pastaza, said that “With the construction of the hydroelectric plant on the Piatua River, they want to take more than 90 percent of the river valley and transfer it to another river ignoring the fact that communities and international laws exist.”

He also expressed his concern about the arrest of the judge, asking: “What moral character are judges using to dispense justice regarding our communities?”