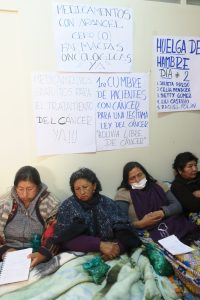 La Paz, Sep 5 (EFE).- A new law entered into force on Thursday in Bolivia guaranteeing free medical care for cancer patients, who for months have been mobilizing to demand better care.

President Evo Morales signed the Cancer Law at a ceremony in La Paz with representatives of associations representing patients and their relatives in attendance.

Morales emphasized one of the key elements of the legislation approved by the Bolivian parliament – the cancer prevention campaigns designed to ensure that the number of cases does not continue to rise in the South American nation of about 11 million, where official figures indicate that some 18,600 people are diagnosed with some form of the disease each year and at least 5,000 of whom die.

The Bolivian leader reproached those who criticize his government for “not doing anything,” and he said that during his tenure in office the country has gone from only four to about 300 hemodialysis machines and is now building three nuclear medicine centers.

Meanwhile, Bolivian Health Minister Gabriela Montaño said that the new law ensures that the state will “comprehensively attend (to patients in the areas) of diagnosis, treatment and palliative care” within the framework of the universal health care system launched earlier this year.

The president of the Association of Cancer Patients and Relatives, Rosario Calle, noted that free access to treatment and drugs, many of them quite costly, had been a long-standing desire of the organization, which now anticipates “better days in the fight against cancer.”

Likewise, the president of the Association of Parents of Children with Cancer, Patricia Mendoza, said that whereas before the country “was not ready to fight against this,” the law now “gives us hope.”

The law is the first in the country to be directed specifically at cancer after other such efforts had failed in the past, and it is focused on prevention campaigns, guaranteeing diagnosis, access to treatment and medicines and to improving the equipment available at the nation’s health centers.

Patient care is to be financed in part by taxes on tobacco, alcohol and heavily processed foods such as candies and pastries.

The law comes after months of protests by cancer sufferers and their relatives and a hunger strike staged in the halls of a hospital in La Paz in July to demand better public care for cancer patients.