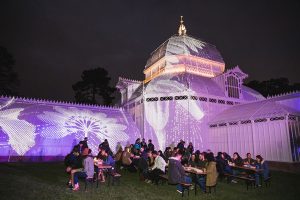 It’s that time of the year again – Oktoberfest! What better place to celebrate it than at this month’s beer garden, which will feature beers curated by Standard Deviant Brewing, Santa Cruz Mountain Brewing and Plow Brewing and live music by Fog City Trio, a polka band.

Spend a day in the stunning setting of the San Francisco’s Botanical Gardens and the magical Conservatory of Flowers and see its giant water lilies famous for its enormous leaves, which allow it to absorb as much sunlight as possible. 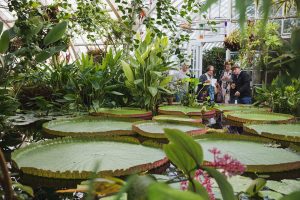 The individual leaves can grow 4-6 feet in diameter.

Ein Prosit to the Conservatory of Flowers!

Photos courtesy of Conservatory of Flowers

This dazzling show transports the audiences from the twilight of the Russian Empire to the euphoria of Paris in the 1920s, as a brave young woman sets out to discover the mystery of her past. Pursued by a ruthless Soviet officer determined to silence her, Anya (Anastasia) enlists the aid of a dashing conman and a lovable ex-aristocrat.

Together, they embark on an epic adventure to help her find home, love, and family. Sounds intriguing and definitely worth spending a few entertaining hours at the architecturally exciting SHN Golden Gate Theatre in San Francisco. ANASTASIA features a book by celebrated playwright Terrence McNally, a lush, new score by Stephen Flaherty (music) and Lynn Ahrens (lyrics) and direction by Tony Award-winning director Darko Tresnjak.

Enjoy a “Journey to the Past” and find out if the rumors about the supposedly lost daughter of Czar Nicholas II of Russia are for real. About SHN:  SHN is the preeminent theatrical entertainment company in the Bay Area, bringing live entertainment experiences to San Francisco’s premier venues. 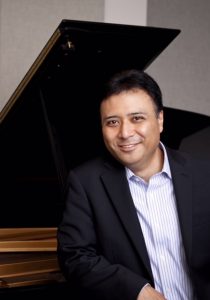 The event is also the inaugural performance of the annual Frieda Ann Murphy Memorial Concert. Murphy who was a native Californian was an accomplished concert organist, as well as a member of the American Guild of Organists, and of the Music Teachers Association of California (MTAC.) The concert’s program features compositions by Chopin, Schubert and Brahms.

About Jon Nakamatsu: A native of San Jose, California, Jon Nakamatsu claimed a distinguished place on the international musical scene in June, 1997 when he was named the Gold Medalist of the Tenth Van Cliburn International Piano Competition, the only American to have achieved this distinction since 1981.

A former high school German teacher, he became a popular hero overnight in the highly traditional medium of classical music. Nakamatsu is a graduate of Stanford University and he performed on the most famous concert halls stages worldwide.

“Nakamatsu evinced brilliant musicianship. His tone and articulation sparkled and shimmered, while his use of dynamics and energy brought out the lifeblood of each and every phrase.”

About Steinway Society – The Bay Area is a non-profit organization based in Silicon Valley. Now entering its 25th season, this dedicated group of musicians, pianists, teachers and arts lovers promotes excellence in piano performance and music education.

Each season, Steinway Society presents a series of classical piano concerts featuring international award-winning pianists, as well as an active school program. For more information on Season Subscriptions, the artists, and Steinway Society, go to www.SteinwaySociety.com 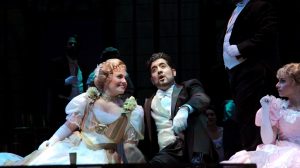 A practical joke. A secret rendezvous. One man’s elaborate plan for revenge leads to a rousing evening of mistaken identities, flirtations, and light-hearted deceit in Johann Strauss’s most celebrated operetta, Die Fledermaus. 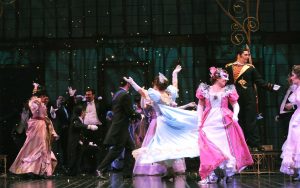 From the sparkling overture to supertitles, to the rollicking tribute and to the bubbles of champagne, the Waltz King’s madcap masterpiece is the jewel of the golden age of operetta.

Sung in German with English dialogue and English subtitles.

General Director Larry Hancock will present a free 45-minute talk to ticket holders about the opera before each performance of Die Fledermaus.