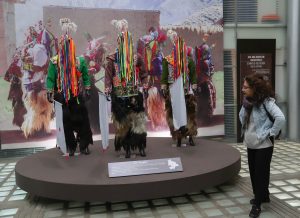 La Paz, Sep 9 (EFE).- Clothing made with llama wool fabric or tree bark to invoke the spirits or to dress as Warriors of the Sun make up part of an expo that invites the public to tour Bolivia in terms of the great diversity of colors, designs and materials used by the different indigenous communities around the country for their clothing.

All kinds of wear, from the long skirts known as “urkhus” used by women of the Bolivian altiplano to the tunics made of tree bark worn by several indigenous peoples in the eastern part, are now on show for one year at the Ethnography and Folklore Museum (Musef) in La Paz.

The exposition is called “Wearing Memories” and displays some 80 examples of indigenous wear from different periods and peoples that show how clothes have served as an identity document.

Musef’s research chief, Juan Villanueva, told EFE that the purpose of the expo is to show “how clothing given form by the body in the surrounding area creates identity.”

And so items of everyday wear are on display, as are others used only for special occasions like festivals and funeral ceremonies.

For example, in the town of Cacachaca in the Andean province of Oruro, the indigenous people perform a ritual dance called the “Jira Mayku” during Carnival in order to “plead the spirits of the dead” to bring the rain so essential for agriculture, Villanueva said. 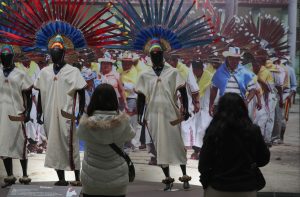 The men wear wide pants made of goatskin or the pelt of some other animal, richly embroidered jackets and caps full of colored ribbons that hide the wearer’s face.

Also dancing in the Amazon region of the Beni are the “cane cutters” and “Warriors of the Sun” who wear the “yususe,” a feather headdress shaped like sun rays, a long white tunic, little bells on their feet and a machete in hand.

Exhibited at the expo are a diversity of ponchos or “unkus,” which characterize the different communities of the altiplano, not only because of the materials made of different llama wool fibers, but also by their colors and designs.

The shades of the “unkus” vary, though most are black, red or coffee-colored, with embroideries of animals of the region and other designs that identify each community, and which are only worn by men.

Similarly, the women use long, thick skirts made of llama, vicuna or alpaca wool, which in some regions are decorated with embroidery that identifies the community they come from.

“In colonial times, indigenous people could not wear clothing that did not belong to their nation…sanctions were imposed, including death – people caught wearing the wrong attire were executed because its use as an ID was so important,” Musef research scientist Milton Eyzaguirre told EFE.

Some women’s clothing in the exposition belonged to the Charazani and Pacajes communities in La Paz province and to the Chayanta in Potosi, among others.

Another area of the expo shows the clothes worn in the Bolivian valleys, a merger of indigenous and European styles. EFE-EPA ysm/cd