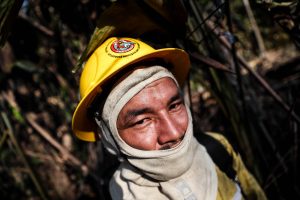 Humaita, Brazil, Sep 10 (EFE).- When the flames begin to light up the night on the Tenharim tribe’s reservation in the Brazilian Amazon, the best men of the tribe head into the jungle to combat the fires. They are firefighters for Prevfogo and their main task is to protect their ancestral lands from the wildfires that are breaking out in the region.

Each year the dry season besets the zone and the Tenharim feel the threat posed by wildfires to their lands, an immense territory in the southern portion of Amazonas state, the largest of Brazil’s nine states in the Amazon region.

But for some years now, the tribe has had its own guardians, about 30 young Tenharim men devoted to fighting the fires in this environmental treasure-box through which the biggest scar in Amazonia runs: the Transamazonica Highway.

Along this highway, built in the 1970s by the military government and crossing east-west through the Amazon jungle, the firefighters are undergoing some of their toughest tests as they work to put out the fires.

However, only the best of the best manage to get into the ranks of Prevfogo, a specialized group within the federal government responsible for preventing and combatting Brazil’s forest fires.

Like nobody else, they are familiar with the lands where they grew up, the rivers, the vegetation on the Tenharim/Marmelos Reservation, which encompasses about half a million hectares (some 1.25 million acres), twice the size of Luxemburg.

When the first flames began to color the horizon in the Tenharim reservation, the firefighters are already ready to put on their boots and their traditional yellow jackets, on which is featured the silhouette of an anteater, one of the local species that is most threatened by the fires.

The 30 or so men comprising the fire brigades are the pride of the Tenharim reservation, a zone in which different indigenous groups live, including the Jiahui, whose ancestral lands were occupied by white landowners several decades ago.

“They are the first, the courageous brigade members who go out to fight the fire,” chief Jupai Jiahui, the leader of one of the Jiahui villages, told EFE.

Thanks to the young Prevfogo men, Jiahui said, the Indians on the reservation have learned to remove the undergrowth in a controlled way. Before, he said, the fires could easily get into the nearby forest because they didn’t have any idea how to keep them out.

“We need them. They’re here to combat the fire. They offer talks to us, because before we didn’t have the knowledge. We set fires (to burn away the undergrowth) and we burned the forests. We didn’t have any idea about anything,” Jiahui said.

Despite the intense rain in recent days, an atypical situation during the dry season, the firefighters have had to continue with their tireless battle against the fires in the planet’s “green lungs,” which are now threatened by both deforestation due to development and the spreading fires.

Some 44 percent of the forest fires registered so far this year in Amazonas state have affected indigenous reservations, areas where hunter-gatherers and environmental conservation units live and work, according to figures recently released by the Environmental Protection Institute of Amazonas (Ipaam).

“If not for those brigades, we would be covered in fires. With the fires, we lose our food supply, a number of natural products,” said Joao Sena Tenharim, another local chief.

The Tenharim and other Amazon tribes are fighting not only the fires but also against the pressure from landowners in a conflict over land that some non-governmental organizations fear could intensify with the coming to power of far-rightist President Jair Bolsonaro, who favors greater exploitation of the Amazon region.