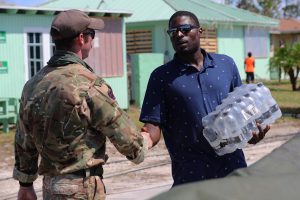 San Juan, Sep 11 (EFE).- Bahamas emergency authorities estimate that some 2,500 people are missing after the devastating passage of Hurricane Dorian through the archipelago.

The storm killed at least 50 people, according to the official count so far.

At a press conference on Wednesday, the spokesman for the National Emergency Management Agency of the Bahamas, Carl Smith, said that the death toll will surely rise.

However, he acknowledged that the 2,500 figure could come down “somewhat” as authorities catalogue all the people currently being housed in shelters on New Providence island, where the capital of Nassau is located.

Meanwhile, the Bahamas government on Wednesday rejected the “fake news” published on the social networks and by local media saying that Dorian caused thousands of deaths in the archipelago.

The head of national security for the Bahamas, Marvin Dames, told reporters on Wednesday that he was concerned by the reports that some 3,000 people had died, most of them on Abaco and Grand Bahama islands, as well as on certain keys, all of which were among the spots most heavily affected by the slow-moving and powerful storm.

He said that authorities needed to be “extremely cautious” about such news reports, since they can affect people in a very emotional way, and it can only complicate matters when exaggerated accounts of that kind circulate on the social networks.

He said he had heard that some people are claiming that the government is hiding the bodies and asked “What do we have to gain by doing that?” adding that he would like to know where those alleged bodies are so that authorities can go and recover them.

Dames added that rescue teams are continuing to meticulously inspect the areas most heavily affected by Dorian, adding that authorities can only count the bodies that they find and admitting that, due to the heavy storm surge and other flooding in the low-lying islands, some bodies may never be found.

Dorian lashed the Bahamas as a Category 5 hurricane, the most powerful on the Saffir-Simpson scale, before turning northward and moving up the eastern US coast from central Florida all the way to Canada.