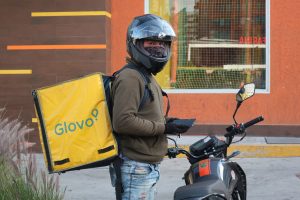 Quito, Sep 15 (EFE).- The rapid increase in the number of delivery services in Ecuador has been possible in large measure due to the Venezuelan migration into the country, with refugees from that country representing 50 percent or more of the distributors who have made this kind of work their livelihood.

As in other world capitals, this kind of service has skyrocketed but in many Latin American countries it has come as a result of the Venezuelan influx, with those people having discovered an employment niche in the welcoming countries.

In Quito, it is normal to see at each stoplight motorists or cyclist carrying distinctive yellow, green or pink boxes of the best-known distribution companies, a phenomenon inconceivable just a year ago.

“More than 50 percent in Quito are of Venezuelan origin, mostly young people who didn’t have any work prospects and now they have some income from a healthy source that is invigorating the economy,” Daniel Arevalo, the manager in Ecuador of Spain’s Glovo company, told EFE at the firm’s headquarters in northern Quito.

“We’re kicking off in Quito, a month later in Guayaquil and four months later in Cuenca,” he said before stating that the country’s second-largest city has become the firm’s main market.

In all, the firm has about 1,000 “glovers,” as the distributors of the yellow box are called, and a long waiting list of people wanting to join up and work, and although this is a “multi-category” job, the main business is in home delivery of food items. 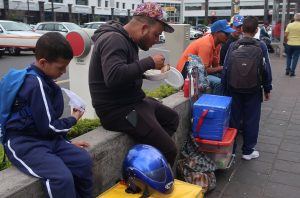 The delivery personnel, along with those of other companies in the sector, generally gather at a mall parking lot in northern Quito, where they avidly scan their mobile devices looking for an order or taking a few minutes to wolf down some lunch.

They are distinguished by their helmets, the delivery boxes and their accents.

“The majority of the Glovo workers are Venezuelans,” Alexei Hernandez, 33 and from San Cristobal, who has been in Ecuador for just three months, told EFE.

Ecuador, which is presently going through a slowing in its economy, has welcomed between 350,000 and 400,000 Venezuelans in the past two years, and obtaining work is not an easy task for them.

In some cases, however, delivery work has become a family business and it’s not unusual to see the husband driving the motorcycle, with his wife and a child on the back carrying the box.

Jason Javier De Gabardila, 27, settled in Ecuador in 2016 from Tachira, starting out with a bicycle and later buying a motorcycle. He says he sets his own schedule and works about two hours per day.

Many employees of Uber in Quito are Venezuelans, so it’s not only delivery work that the migrants are gravitating towards, but also transportation services, although that is still not legal in Ecuador.

Former Caracas resident Douglas Ramos, age 35 and who has been in Ecuador for three years, decided to fully devote his energies to delivery work after seeing several friends make money at it. He works 40-45 hours per week and said that it’s “honest, honorable” work, “which is what people are really looking for.”