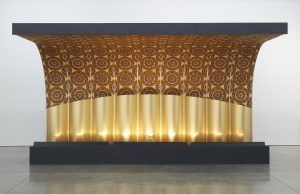 New York, Sep 17 (EFE).- Jason Moran, considered to be one of the most innovative jazz musicians in the United States, has created an ode to that musical genre with a collection of artworks to celebrate and preserve it in an exhibition that arrived on Tuesday at New York’s Whitney Museum of American Art.

Scenes recreating some of New York’s most emblematic jazz clubs, along with Moran’s own sculptures and drawings, audiovisual pieces, as well as collaborations with visual artists and performances are all part of the exhibition, which will open to the public on Friday.

The show questions the frontiers between different artistic disciplines and how they are presented, the curator of the Jason Moran exhibit, Adrienne Edwards, said at the presentation of the exposition.

The broad-based exhibition of Moran’s artistic work as a pianist and composer, as well as an innovative artist in other media, also enjoys the collaboration of assorted US artists, both established and newly arrived, including Kara Walker, Stan Douglas, Joan Jonas and Lizzie Fitch. 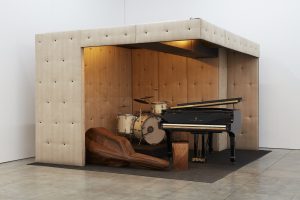 Among the things that have received considerable attention from the 44-year-old Moran are recreations of some of the Big Apple’s most well-known jazz locales, including the “Savoy Ballroom,” synonymous with the Swing Era, the “Three Deuces,” the incubator for the bebop movement, and “Slug’s Saloon,” where leading jazz artists performed in the 1960s and ’70s.

Moran, born in Texas, said that his aim in recreating these sites was to respond to the rate at which such spots in New York are being destroyed instead of preserved and to create monuments to a history that has been largely lost.

The musician said that he loves playing music from the past but he thought why not create these spaces, too, outfitting them with old pianos and other instruments, large mirrors and other decorations that provide viewers with the ambience of those locales.

Moran will also offer performances on 11 weekends, the first a small concert in which he will join with legendary saxophonist Archie Shepp, 82, on Sept. 27, to be followed over the subsequent weeks by Joanne Brackeen, Oliver Lake, Cecil McBee, Onyx Collective, Tiger Trio and Jamire Williams.

Besides his music, Moran, who is the artistic director for jazz at Washington’s Kennedy Center, displays for the public his ability to make concrete his passion for jazz in sculptures and other works of art.

Moran, who has released 15 albums and now owns his own record label, Yes Records, also uses in the exhibition pieces that have a deep sentimental value, such as the oven his grandmother used to cook with, along with old musical scores.