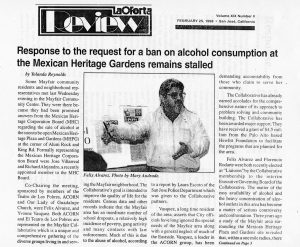 Co-Chairing the meeting, sponsored by members of the Teatro de Los Pobres, ACORN and Our Lady of Guadalupe Church, were Felix Alvarez, and Yvonne Vasquez. Both ACORN and El Teatro de Los Pobres are represented on the Mayfair Collaborative which is a unique and comprehensive gathering of the diverse groups living in and serving the Mayfair neighborhood. The Collaborative’s goal is intended to improve the quality of life for the residents. Census data and other records indicate that the Mayfair area has an inordinate number of school dropouts, a relatively high incidence of poverty, gang activity and many contacts with law enforcement. Much of this is due to the abuse of alcohol, according to a report by Laura Escoto of the San Jose Police Department which was given to the Collaborative partners.

Vasquez, a long-time resident of the area, asserts that City officials have long ignored the special needs of the Mayfair area along with a general neglect of much of the Eastside. Vasquez, a leader in the ACORN group, has been demanding accountability from those who claim to serve her community.

The Collaborative has already earned accolades for the comprehensive nature of its approach to problem solving and community building. The Collaborative has been awarded major support. They have received a grant of $4.5 million from the Palo Alto based Hewlitt Foundation to facilitate the programs that are planned for the area.

Felix Alvarez and Florencio Rodarte were both recently elected as “Liaisons” by the Collaborative membership to the interim Executive Governing Board of the Collaborative. The matter of the easy availability of alcohol and the heavy concentration of alcohol outlets in this area has become a matter of serious controversy and confrontation. Three years ago a study of the Mayfair area surrounding the Mexican Heritage Plaza and Gardens site revealed that, within a one mile radius, there were 125 places for the purchase of liquor. According to the study, such a concentration of places to buy liquor is five times that of other neighborhoods in San Jose. Along with this fact, this area is seen to suffer an inordinate number of problems.

In a recent issue of New Times, a publication that “serves as forum for addiction prevention, treatment and recovery related issues,” it was reported that “Alcohol (is) still (the) Major Drug of Abuse.” In the article it was stated that, “Alcohol is still the most used drug, and chronic drinking rates have remained relatively constant says the State Department of Alcohol goes on to reveal that “Alcohol and other drug use levels are also significantly higher among (school) absentees and dropouts than for those students still in school.”

Such information has long been known and understood by many in the community. Their perceptions have now been validated by the studies and research that has been conducted by local concerned health professionals, law enforcement officials, community advocates and others.

Mexican Heritage Board member Jose Villarreal, who is also an Attorney and a Santa Clara County Youth Public Defender, stated that he shared the residents’ concern for the abuse of alcohol.

He pointed out-that 80% of the 5,000 cases that came before the juvenile court last year were alcohol related. He added that a similarly high percentage of domestic violence incidents are related to the use and abuse of alcohol.

Following introductions and identification of those present, the gathering was to hear official MHC responses to questions that had been posed to their full Board in October of 1997. After many questions directed toward the MHC board members and increasingly tense discussions, it was apparent that there were no satisfactory answers to the community’s questions.

Mr. Villarreal stated that his presence at the meeting was intended to “reach out” to the community for the inclusion of “one or two” people to join a special committee who has been assigned to analyze the questions posed to the Mexican Heritage Corporation by Alvarez of El Teatro de Los Pobres, Yvonne Vasquez of ACORN and other community representatives. After many questions and comments, those attending the Wednesday night meeting were told that the special MHC ad hoc Alcohol Policy Task Force committee had four other members besides Villarreal. They are; Tomas Estrada, Susan O’Connor Fraser, Dan Perez and Mexican Heritage Corp. staff person Monica Gomez. How often the Task Force met was not clear.

Florencio Rodarte, a “participant in the Collaborative and a member of ACORN, questioned whether future meetings with the full Board would be any different from their meeting over three months before. He explained, “it is difficult to trust anyone when you (the MHC Board) have a closed meeting after we have made a presentation.” Earlier Alvarez had stated, “The (MHC) Board is operating within its power but it has alienated itself from the community it wants to serve.” He added, “This (alcohol sales) has not been a silent issue.”

Villarreal had earlier chastised the community advocates for “not having presented a sufficiently comprehensive analysis.” He explained that their questions required far more analysis and were not easy to answer. Alvarez said that he thought it curious that the study which he and others had conducted had, “benefited many throughout the state but was not acceptable to the MHC Board and its Alcohol Task Force.”

It was hard for this writer to understand why the first question asked by Alvarez which was, “why does the MHC have to sell alcohol” remained unanswered.

Villarreal explained that a response to that question required that his Task Force first, “develop a set of recommendations to the Board along with an implementation strategy.” The community has been adamant that no alcohol be sold at the facility and will remain “steadfast in their opposition,”

Alvarez said. Villarreal stated that he had been assigned the task of developing an alcohol policy. After a lengthy discussion, Villarreal explained that he “did not know why the MHC needed to sell alcohol.” He also did not know the amount of anticipated revenues from the sale or serving of alcohol. Yolanda Vega, now an employee of MACSA, stated that she personally did not wish that alcohol be available. However, she said, “I believe that people are mature and have a right to do what they want.” Yvonne Vasquez, a member of ACORN, countered. “It is my opinion that it is detrimental to make alcohol available because of its connection to violence.”

Villarreal promised that the Mexican Heritage Gardens and Plaza operation and management intends to be a good neighbor. Villarreal said that it remained uncertain whether it would be appropriate to ‘sell or serve’ alcohol. Alicia Mota, a Mayfair resident, responded, “There is no difference if you serve or sell the alcohol when the end result is the same. Some people will still get drunk and the consequence are the same.” She also reminded the two MHC Board members that for cigarette smoking, it is today not acceptable to have someone just decide to smoke in the presence of another person. There is, she said, no confusion regarding the ban on smoking. Similarly, such a ban on alcohol is possible, she stated.

San Jose District 5 City Councilman Manny Diaz released a press statement last Wednesday indicating his opposition of the sale or serving of alcohol at the Mexican Cultural Heritage Gardens Project that will be opening the summer of 1999. A question regarding the possible transfer of liquor license was left unanswered by Villarreal who stated that all would depend upon the alcohol policy that would be adopted.

Three questions asked whether there was a business plan for the MHPG, who would apply for the needed liquor outlet permit; and what message was intended for the youth. All remain unanswered.

With regard to the endorsement of the two city policy resolutions for further restrictions on the sale of liquor approved by the City Council a memo dated September 5, 1997 to the City Rules Committee indicates that the City Attorney staff has reviewed this and the City cannot legally restrict or limit the transfer of liquor licenses. Liquor licenses are controlled by the State Alcoholic Beverage Control Board. AB 2897 gives local government a role over new licenses, not transfers of existing legal licenses. The City can take action if illegal activities are taking place in an establishment, but not solely because it is an alcohol establishment.

Alvarez says, “It is a disgrace that, after three and a half months, MHC has done nothing but establish an Alcohol Task Force that does not include community members and residents.” He adds, “it is clear that they were unprepared for the meeting and don’t care about the neighborhood.”