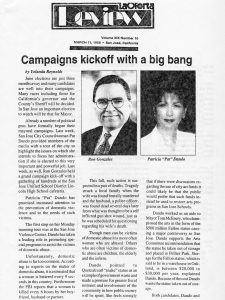 June elections are just three months away and many candidates are well into their campaigns. Many races including those for California’ governor and the County’s Sheriff will be decided. In San José, an important election to watch will be that for Mayor.

Already a number of political pros have formally begun their mayoral campaigns. Last week, San Jose City Councilwoman Pat Dando provided members of the media with a tour of the city to highlight the issues on which she intends to focus her administration if she is elected to this very important and powerful job. Last week, as well, Ron Gonzales held a grand campaign kick-off with a gathering of hundreds at the San Jose Uniﬁed School District Lincoln High School cafeteria.

Patricia “Pat” Dando has promised increased attention to the prevention of domestic violence and to the needs of such victims.

The first stop on her Monday morning tour was at the San Jose – Violence Center. Dando has taken a leading role in promoting special programs to assist the victims of domestic abuse.

This fall, such action is suspected in a pair of deaths. Tragedy struck a local family when the wife was found brutally murdered and the husband, a police officer, was found dead several days later from what was thought to be a self inﬂicted gun-shot wound, just as he was scheduled for questioning regarding his wife’s death.

Dando pointed to Quetzalcoatl “snake” statue as an example of government waste and made a promise for greater fiscal restraint and involvement of the community in how public money will be spent. She feels strongly that if there were discussions regarding the use of city art funds it could likely be that the public would prefer that such funds instead be used to restore arts programs in San Jose Schools.

Dando worked as an aide to Mayor Tom McEnery, who championed the arts in the form of the $500 million Fallon statue causing a major controversy in San Jose. Dando supports the Arts Committee recommendation that the statue be taken out of storage and placed in Pellier Park. Storage for the Fallon statue, which is said to be in a warehouse in Oakland, is between $20,000 to $30,000 per year, explained Dando. Because of the cost Dando wants the statue taken out of storage.

Both candidates, Dando and Gonzales, have made education their highest priority, even though the Mayor’s office in San Jose has no direct control of schools. Dando and Gonzales both propose to maintain existing partnerships which the city has with local schools and they both promise more such collaborations in order to help promote the education of the City’s youth. Both want to expand after school homework centers, improve recreational opportunities and provide better park maintenance. Dando would like to construct more parks in spaces owned by the city that currently stand unused other than to provide easements for such services as utility lines.

Dando intends to greatly expand childcare centers throughout the city and also to make it easier (with proper standards) for individuals to provide small cluster child care in residences throughout the city. Parents who met the press stated that waiting lists for child care can extend to a four-year wait. The parents say that as soon as a child is born the parent must enroll their child in a program.

Gonzales has promoted literacy for youth. He is the founder of the Role Model Program which recruits business leaders and mentors to visit local middle schools. Gonzales says that some of his priorities for San Jose are, “revitalizing San Jose schools, invigorating and unifying its diverse neighborhoods and solving the Valley’s vexing traffic problems”. These priorities were embodied in the theme of the Campaign kick-off, which was a “Convention of San Jose Neighborhoods.” Among “those supporting Gonzales was former mayor Janet Gray Hayes, whose administration focused on the needs of the neighborhood.

Though Gonzales has been criticized for recently moving to San Jose in order to be eligible to run for the San Jose mayor’s position, he and his family have been residents of the valley for many years. Prior to serving two terms on the Santa Clara County Board of Supervisors from 1989 -1996, he served Sunnyvale as a City Councilman and, later, for two terms as the city’s mayor. Since leaving the County Board, Gonzales has been at Hewlett Packard as an education program manager. Before launching a career in politics, Gonzales had been an employee of Hewlett Packard.

Both Dando and Gonzales have stated that they do not favor the demolition of historic sites such as the Jose Theater and the Montgomery Hotel in the downtown area.

Should Gonzales win the election, he would be the first Hispanic in that position since California became a part of the United States. Should Dando win she would continue a trend of female mayors that counts, among them, Dolores Pacheco who was the city alcalde (mayor) under the Mexican flag in 1845.

Others who have ﬁled papers to run for mayor of San Jose are Kathy Chavez Napoli, Bill Chew, Dale Detwiler, and Sam Junaidy none of which has yet held a formal campaign kick-off.

Dando’s most prominent local supporter is former mayor, Tom McEnery and includes many acquaintances from her years of volunteer work in education and more recently her tenure on the San Jose City Council.