Eastside renters bring their problems to the attention of the media 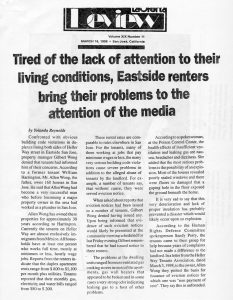 Confronted with obvious building code violations in duplexes lining both sides of Heller Way street in Eastside San Jose, property manager Gilbert Wong denied that tenants had informed him of their concerns. According to a former tenant William Harrington, Mr. Allen Wong, the father, owns 160 houses in San Jose. He said that Allen Wong had become a very successful man who before becoming a major property owner in the area had worked as a plumber in San Jose.

Allen Wong has owned these properties for approximately 30 years according to Harrington. Currently the tenants on Heller Way are almost exclusively immigrants from México. All households have at least one person who works full time, mostly at minimum or less, hourly wage jobs. Reports from the renters indicate that the duplex apartment rents range from $ 800 to $1,100 per month plus utilities. Tenants reported that their monthly gas, electricity and water bills ranged from $80 to $ 200.

These rental rates are comparable to rates elsewhere in San Jose. For the tenants, many of them working at jobs that pay minimum wages or less, the many very serious building code violations cause severe problems in addition to the alleged abuse of tenants by the landlord. For example, a number of tenants say, that without cause, they were served eviction notice.

When asked about reports that eviction notices had been issued to a number of tenants, Gilbert Wong denied having issued any. Upon being informed that evidence of such eviction notices would likely be presented at the community meeting scheduled for last Friday evening Gilbert remembered that he had issued notice to three renters.

The problems at the dwelling units ranged from unventilated gas cooking stoves in most of the apartments, gas wall heaters that appeared to be broken and in some cases a very strong odor indicating leaking gas to a host of other problems.

According to a spokeswoman, at the Poison Control Center, the health effects of insufficient ventilation and leaking gas are nausea, headaches and dizziness. She added that the most serious problems is the possibility of an explosion. Most of the houses revealed poorly sealed windows and there were ﬂoors so damaged that a gaping hole in the floor exposed the ground beneath the home.

It is very sad to say that this very deterioration and lack of proper insulation has probably prevented a disaster which would likely occur upon an explosion.

According to the Human Rights Defense Committee spokesperson Sandy Perry, the tenants came to their group for help because years of complaints had not made a difference to the landlord. In a letter from the Heller Way Tenants Association, dated March 3, 1998, to the owner, Allen Wong they protest the basis for issuance of eviction notices for which one was “non-payment of rent”. They say this in unfounded.

They also protest the ever-larger rental rates issued to the tenants, even those who have lived in the apartments for years.

That letter was signed by 19 residents on Heller Way. Human Rights Defense spokes-woman Rachel Perez, told Gilbert Wong the property manager and the son of Mr. Wong that “No one should have to live in such intolerable conditions.” Pérez said that she could relate to the tenants problems and has personal fears because, she too, is facing eviction from an apartment that also contains shocking signs of structural neglect.

Community advocate Felix Alvarez, who is a resident of the Mayfair area in which Heller Way is located, explained that, as an Alum Rock Board member and as participant of the Mayfair Collaborative, he would bring their problems to the attention of the Collaborative, since that group is concerned about housing and other conditions in the area. The Collaborative is an attempt to assess and improve those conditions in the area that affect the academic performance of youth and the quality of life in the neighborhood.

Mr. Harrington blamed the tenants for the deterioration of the apartments saying that it was instead due to street side drug dealing, too many people living together, for instance 14 people in a one bedroom apartment, street thefts and drunkenness. He admitted that the police had made few arrests. As in too many neighborhoods there are some who violate laws. Upon visiting the various apartments almost all of which were opened to the media last Thursday evidence of gang activity and drug use was not readily visible in the homes as was the case at the not too distant apartments at Poco Way before they were demolished by City’s ofﬁcials.

He remarked that his apartment was in very good condition and that the monthly rent for his unit, where he and his wife raised their four children, was $730 and $60 for utilities. He implied that he was currently living on Heller Way but he and his wife no longer live there. He explained that when Mr. Wong bought this property over 30 years ago, then he moved two houses onto each lot. Later on some of the houses were moved there when other properties were converted to other uses, as when the airport was expanded.

A tenant asked for help from Wong over a controversy that arose over a room that was added adjacent to her window (thus, adding one more housing code violation).

Evidently, the addition had to be removed. The woman whose window was blocked is upset that she is now accused of causing the removal of that addition. She asked that Mr. Wong intervene and that he explain to the neighboring tenant that she had nothing to do with the problem. When asked, who was responsible for the addition Wong said he did “not know.” His attorney, Nicolas S. Polumbo, who was present for the Friday night tenant dispute and recommended instead that she ask the police to intervene.

This writer asked, on what basis Polumbo thought the police would respond when, even in the case of an auto accident, the involved parties are themselves asked to make out the reports, not an officer. Human Rights Defense Committee spokesman Sandy Perry reminded the attorney that Polumbo had admonished those gathered for the tenant meeting that they (Wong and company) were present in a “spirit of cooperation.” Perry then asked Polumbo and Wong cooperation with the group by intervening in the misunderstanding between the tenants, since the construction of the addition was on his Wong’s) property and therefore the addition had (become) his responsibility.

The tenants had a list of 14 concerns which were: their apartments be painted; that there be pest (rat) control; that the management treat people with respect. that the management provide larger garbage receptacles and periodically bring onto the street a large garbage container for use by the tenants, that the gas leaks be repaired, that the manager/owner bring the rental units up to city and state housing codes, that they remove the standing pools of water surrounding many of the apartments; that they respond with diligence to their requests for repairs, that they fix broken water faucets and poorly functioning toilets and, most importantly, cease issuing evictions without cause and that they not raise rents after making necessary repairs. The tenants are asking for direct attention by the property manager. They indicated that their contact with management was in the form of a bill each month for their rent. The bill is mailed to each household and contains an envelope for sending their rental payment to Mr. Wong.

The tenants also promised Gilbert Wong work collectively to keep the area surrounding their apartment units. The tenants repeatedly asked that there be no retaliation. Pérez promised that if such was evident it would result in negative publicity. Those renters who were present Friday evening seemed determined to improve the quality of life in their neighborhood. They were obviously very concerned that their complaints would be met with eviction notices or higher rents. Polumbo indicated that rents can and will likely increase but only within the rates and time allowed by municipal law.