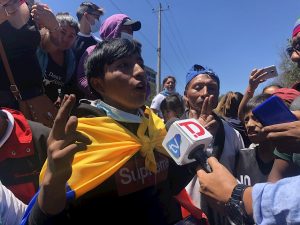 Quito, Oct 15 (efe-epa).- Sixteen-year-old Diego Vela already knows what it means to risk his life in street protests, like many other indigenous young people who were in the front lines of the disturbances that over the past two weeks paralyzed Ecuador until they twisted the government’s arm enough to get it to adjust its decree eliminating the fuel subsidy.

Vela is also one of the more than 10,000 indigenous people who came to Quito from all over the country to protest the fuel subsidy cancellation, which had severely threatened the subsistence economies in their rural communities.

Now, after having gotten the Lenin Moreno administration to reverse itself on the fuel subsidy cancellation, which was their main objective, the protesters are heading back to their homes and meager livelihoods after being away for almost two weeks breathing tear gas and dealing with all the other repressive measures the police used against them to try and disrupt their takeover of the capital.

“We were fighting at the front, taking over for those who couldn’t fight,” Vela told EFE while he waited with his parents for the bus that would take them back to Cotopaxi, the central Andean province from which most of the indigenous protesters came.

“I’m leaving happy to have been here, fighting until the end, but also sad about the brothers who fell (in the struggle). I know that they didn’t die in vain,” he said, referring to the eight people who died during the protests, which also left some 1,340 injured.

With an Ecuadorian flag knotted around his neck, Vela said that he had been wearing the same clothes for the past week, during which time he never once had the chance to sleep on a mattress. 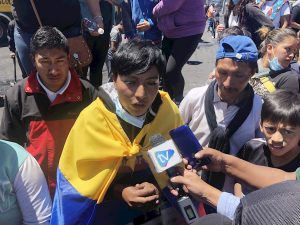 “During the first days, I slept in parks and then I was able to get some shelter, but on the ground and with just a blanket. That didn’t make me want to give up, it was more like a motivation to keep fighting (our way) forward,” he said.

While Vela spoke, a larger and larger group of people – both indigenous people and Quito residents – crowded around to hear his story, which they interrupted from time to time with shouts and hurrahs in honor of Ecuador and Cotopaxi.

“They hit me three times in the body, but I don’t think it was in vain. It was to achieve a victory,” Vela said regarding his experiences in the street battles with police in El Arbolito park, which was Ground Zero for the protests and ended up looking like a war zone.

He didn’t hesitate to call the police “murderers,” saying that “they didn’t shoot into the air. They pointed their guns at our bodies.”

“They aimed at my leg. Look how my telephone ended up, and my leg is still injured,” said Vela, displaying the fragments of his cellphone.

“A shotgun pellet hit me in the lip but I didn’t fall down. I split some oranges and put them in a box and went to give them to those who were up front, although I was choking, but I was there to support the people,” he added.

When asked about why he had risked his life, he responded that it was because his family was directly impacted by the 123 percent fuel price hike after the subsidy was eliminated.