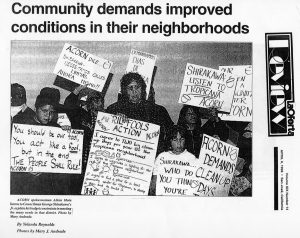 Last Wednesday, several community groups, one based in District 7 and the other based in District 5, gathered to deal with quality of life issues in their neighborhoods. One of the groups, the ACORN Tropicana Neighborhood Association, held an “April Fools Action” at the Campaign reelection head-quarters of San Jose District 7 Councilman George Shirakawa Jr.

The posters that the ACORN group (Association of Community Organizations for Reform Now) held aloft as they marched to Shirakawa’s ofﬁce revealed what they were protesting. Among their complaints were that, “We are tired of waiting.” Another stated, “We demand clean streets for our neighborhood”, and in Spanish, “Demandamos días de limpieza.”

When they entered the campaign headquarters in the shopping center at the comer of McLaughlin and Capitol Ave., Shirakawa sat down at a table and invited the protesters to sit down and discuss their grievances. They refused. ACORN spokeswoman Alicia Mota, responded by saying, “We have been asking to meet with you for the last 3 months. Shirakawa refuted the claim that he had ignored the community, noting that he had met with several other groups in the District. Mota acknowledged that these meetings had taken place, none the less, she said, “you have time for everyone else and set ACORN aside.”

Mota held up a placard clearly spelling out the problems they wanted him to address. They want street sweeping and two major Council sponsored cleanup days per year where large bins would be provided to collect the neighborhood’s trash. They want construction of a community center. They are also asking that street lights be installed in areas where there are no lights.

Shirakawa would only sign one of the requests. That was for more lighting, which he said had already been budgeted for at least one more street light in the area. He explained that to be fair he had to distribute the funds (project), fairly among all of ‘his constituents. He further admonished the ACORN folks to “unite” with the other community organizations in this District. He added that in the last twenty-four years he was the only candidate who has done anything for that district.

Mota and others explained that Tropicana ACORN group had a very speciﬁc area of concern. She invited Councilman Shirakawa to walk that neighborhood in order to visually note the lack of City Hall attention to their area compared to other parts of the District. Another ACORN member expressed the urgent need for more cleanup days because of the high number of residents per household. This results in signiﬁcantly more trash than might otherwise occur, they explained.

Others asked about tree trimming and expressed unhappiness with the City policy whereby the property owners are responsible for the street trees unless they want to cut one down. In the recent storm a fallen tree was not removed for days and the property owners were told that they were responsible for removing the tree. Shirakawa admitted that the trees that had been planted in that area created problems and that he would be speaking to the city’s staff to find a more suitable tree which would not require heavy pruning each year, especially since the city has established a ten-year tree trimming cycle.

Shirakawa refused to agree to the other two major demands, saying that he would be “lying” if he agreed. He went to tell the group. “You don’t have to do this (to get my attention)”. Mota explained that when they had called to make an appointment they had been curtly told by his chief of staff that, “The Councilman does not have time to meet with you.” Shirakawa promised to “look into” that matter.

As the group left the office they chanted, “La gente presente jamás será vencida.” Among a number of other chants, was one written in Spanish especially for Councilman Shirakawa.

It was clear that the ACORN group was feeling very frustrated. ACORN takes pride in taking action. Their mission statement says, “We don’t just talk about the problems of safety, failing schools, and the need for better jobs — we want something done about them.”

Later on Wednesday evening the Heller Way Tenants Association held a follow up meeting to several they have previously held to discuss the problems which they are having with their landlord, who, they say, has balked at making repairs to his rentals even though many of the problems demonstrate a deﬁance of and blatant disregard for the city’s housing codes and r e g u l a t i o n s.

Listening attentively to their problems were community advocate Sandy Perry and Rachel Perez, both members of the Human Rights Defense Committee and Alum Rock School Board Trustee Felix Alvarez, who is a District 5 Council candidate. Also, there to hear from the residents was San Jose Police Department Captain Pete Oliver. Before the evening meeting at the San Antonio School, Alum Rock Superintendent Santiago Wood, Alum Rock School Trustee President Tony Alexander, two Mayfair Collaborative members Dolores Santa Cruz and Yolanda Vega and Guadalupe Parish PACT spokeswoman Mary Contreras and Felix Alvarez had met with tenants at Heller Way, since some could not attend the later meeting and others had not seen for themselves the shocking conditions of the dwellings.

Even many who live in Silicon Valley, where shocking rents are now common, were clearly shocked to be told that the tenants on Heller Way pay rents that range from $800+ to $1020 per month, plus another $80 to almost $200 monthly for utilities. The tenants contend that when they protest to the owner regarding needed repairs, there seems to be a pattern of evictions.

District 5 Councilman Manny Diaz explained that he did not attend the Wednesday evening meeting because he was unaware that it was being held. He explained that his ofﬁce was working with the City’s code enforcement department, specifically. Juanita Baca, who had met with Gilbert Wong the property manager and son of the owner Allen Wong, to review the problems in the dwellings that they rent on Heller Way. Wong owns, it is said up to, 160 rentals in the City of San Jose.

Diaz explained that his office has indicated that the repairs must be done. He indicated that Wong had 30 days in which to make the repairs and that the notices had been served beginning March 14 at the time TV Channel 11 brought the City’s Code enforcement staff to Heller Way to document some of the violations which renters wanted remedied. He also promised that as a member of the City’s Housing Committee and he would be making some recommendation to bring more city oversight to residential rental properties.

La Oferta inquired regarding a complaint the tenants made last Wednesday evening. They had stated that the Wong handyman had attempted to replace a malfunctioning gas heater with one that had been discarded in the yard of another rental. Other tenants said that to a request by code enforcement that damaged electrical outlets be repaired, the response by the “handyman” had been to seal and plaster over the damaged outlets. City code enforcement officer Juanita Baca said that she was scheduled to meet with the property manager this week to look at the repairs that he had been asked to make. And were now reported to have been made.

Baca indicated that the repairs must be completed within 30 days. She said that she would be returning this week with the city building inspector to look at the building code violations. The type of repair required will determine the amount of time that will be allowed to complete the job. She indicated that if the tenants are concerned about lead paint being present in the home, free testing kits are available by contacting a County program at 885-42 4 and to ask for Molly Gonzalez. The State is currently studying a proposal to clean up lead contamination but until now there has been no laws passed on the removal of lead.

Baca stated that three tenants would not let her conduct an inspection. It is difficult to totally understand why since the majority of the Heller Way Tenants seem determined only to improve the conditions of their homes in the interest of themselves and their families. Most of the tenants contend that if they all stay united the landlord will have to make the repairs.

One 20-year resident, Ruben Velasquez, said that he was willing to work with his fellow neighbors and the landlord so that together they would all work to keep the area clean and attractive. He said that one of the tenants, a gardener, had been donating his time to help his neighbors make their yards attractive. Several tenants said that the area looked trashy because cars were abandoned on the street and often served to hold trash. They asked for help in removing the abandoned cars. Captain Oliver said that the police could help in this matter and that he would be sending an officer to speak to the tenants in order to identify those cars whose owners were unknown and appeared to be abandoned.

Velasquez also mentioned the allegations that gangs rule the neighborhood. He says that the problems come from elsewhere, since the neighborhood appears vulnerable and lacking in self-respect.

That attitude is one he wants to dispel by improved care of the homes and yards on both sides of Heller Way.

Baca indicated the problem which some tenants have had regarding eviction notices, in particular, the notice served to Micaela Fregosa which was dated the day after the media came to the neighborhood on March 13. It is a civil issue and that her department could not offer help.

(She added that Legal Aid received city funds speciﬁcally to assist tenants in such situations. Retaliation is, by law, not permitted). The Sheriffs served it at Fregosas’ home March 18. Along with the eviction notice, she was handed back her March rent which she had paid by Money Order on March 5. She can now remain in her unit until April 21 due to legal action. She was informed by Luis, the landlord’s handyman, that she had to move her furniture out of the apartment this last Monday so that he could paint. Fregosa is very worried about the need to move all of the furniture out at one time.

City officials informed La Oferta that strict rules apply to owners of four or more apartments, but that there are no such regulations related to the rental of single family dwellings. It has been suggested that the same rules apply to property owners who rent four or more dwellings. Such a regulation would help solve many of the abuse problems between tenants and landlords. It does mean, as well, that the city would have to increase enforcement efforts. An added problem for some tenants is that after paying their rent, many families do not have the financial resources to hire a lawyer.

Neighborhood tenants explained that those who have refused help from code enforcement are afraid. They believe that if they complain, they too will be served with an eviction notice.

Trustee Felix Alvarez and others will be meeting this week to develop a plan to deal with the problems that confront these tenants and others in the area.