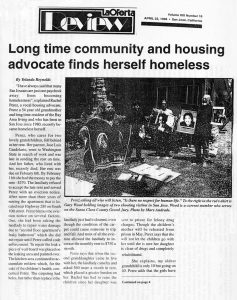 “I have always said that many San Joseans are just one paycheck away from becoming homelessness,” explained Rachel Perez, a vocal housing advocate. Perez a 54-year-old grandmother and long-time resident of the Bay Area living and who has been in San Jose since 1980, recently became homeless herself.

Perez, who cares for two lovely grandchildren, fell behind in her rent. Her partner, Jose Luis Candelario, went to Washington State in search of work and was late in sending the rent on time. And her father, who lived with her, recently died. Her rent was due on February 6th. By February 11th she had the money to pay the rent – $570. The landlady refused to accept the late rent and served Perez with an eviction notice. After more than three years of renting the apartment that is located near Highway 280 on South 10th street. Perez blames the eviction notice on several factors. One, she had been asking the landlady to repair water damage due to “second floor apartment’s leaky bathroom” which she did not repair until Perez called code enforcement, to repair the leak 21 piece of wall board was placed on the leaking area and painted over. The kitchen area continued to accumulate mildew which, for the sake of the children’s health, concerned Perez. The carpeting had holes, but rather than replace it the landlady just had it cleaned, even though the condition of the carpet could cause someone to trip and fall. And most of all the eviction allowed the landlady to increase the monthly rent to $750 a month.

Perez says that when the second granddaughter came to live with her, the landlady came by and asked $60 more a month in rent, which placed a greater burden on her. Rachel has had to raise the children since her daughter was sent to prison for felony drug charges. Though the children’s mother will be released from prison in May, Perez says that she will not let the children go with her until she is sure her daughter is clean of drugs and completely rehabilitated.

She explains, “my oldest grandchild is only 10 but going on 40.” Perez adds that the girls have seen and suffered so much – it hurts me that she does not have a place to call home. The oldest likes school. She was attending Lowell school as often as she can these last few weeks but is too far from her current shelter. She said that she will borrow books from the library to keep up with her reading since she cannot get to school. (Reading is a very important skill that is emphasized in the third grade.) Her younger sister is 4 years old and, according to Perez, does not understand what is happening and frequently cries because she wants to “go home.”

Perez is currently staying at a motel but that will end soon. Friends and the Sacred Heart Community Center programs have provided assistance to Perez who pays $75 a day to stay at a local motel in north San Jose.

Perez who has been a leader in her community was honored by the Santa Clara County Human Rights Commission last year for her extensive and important contributions in such matters as police abuse. housing advocate for the homeless and more recently tenant abuse on February 28 of 1997 at their annual recognition banquet held that year at Lou’s Village.

State Senator John Vasconcellos and US. Congresswoman Zoe Lofgren both honored Perez individually and the Human Rights Defense Committee for their activism on behalf of the community.

Perez says that she first became involved in local community issues when mothers of incarcerated youth came together to form a group known as “Save Our Sons.” Rachel has had her share of heartbreak and disappointment. A son, Eddy was killed by Anthony Ransom who, 18 years later, made the front pages of the Bay Area newspapers when he was found guilty of having molested and raped young women in the east bay Catholic college. Perez, says that Ransom, a co-worker of her son, thought Eddie was responsible for losing his job and came back for revenge. Ransom claimed to have a gun for sale and let Eddie hold and shoot the .357 magnum. He was not interested and handed it back to Ransom, who then fatally shot her son in the chest. Perez says that Ransom did not serve even six months in jail for that death. After they caught Ransom for the rape and molestation of the young students it was discovered that he had at least 14 felonies and, with “three strikes”, she says he must be in prison for life.

Her daughters became involved in drugs. We need more education and positive activities for our youth — prison is not the answer. What prison does is teach the inmates how to make better drugs and how to develop connections to bring drugs into the prisons. She explains that an acquaintance knew of an instance where a prison guard ran drugs for four years for an inmate. She blames the government for contributing to the terrible drug epidemic we are having – she has seen police officers plant drugs on people in the community. Perez often says that she does not think that all law enforcement ofﬁcers are crooked and unprofessional, but she does share a healthy skepticism of the actions of some officers.

Perez, along with a group of San Joseans, took up cause of the family of Anthony Soto Mesa who was killed by a County Sherriff. The leadership of that group was made up of Perez, Gary Wood, Sandy Perry, Pat Circle, Jessie Garcia, and Jeannie -Barber. They formed the group named “The Human Rights Defense Committee.” This group was inﬂuential in bringing the shooting death of Soto Mesa to the attention of the Grand Jury. In an unprecedented event the trial was forced open to the general public. Even so the trial and the decisions of the jury is still controversial.

It was Human Rights Defense Committee spokesperson Perry and Perez who were asked by the tenants at Heller Way in East San Jose for help in dealing with a landlord who, they say, repeatedly ignored requests for repairs on his rental properties, even while he continues to demand rents in the range of $850 – $1020 a month. In addition to these market rate rents, the tenants each pay between $50 and $200 more in utilities each month.

Perez explains that when she began meeting with the Heller Way tenants a year ago she never imagined that she would be facing the same problems, an eviction with few prospects for an affordable apartment in the area.

Perez says that she would be happy with an efficiency apartment or another that she could rent for herself and her two grandchildren. If any La Oferta readers know of such housing for a grandmother with two grandchildren, leave a message at La Oferta. La Oferta can be reached at 436-7850. © La Oferta Newspaper.