Playa del Carmen, Mexico, Nov 3 (EFE).- Six marine turtles were reintegrated into their habitat in the Caribbean Sea on Sunday after being released from the Xcaret veterinary hospital in the southeastern Mexican state of Quintana Roo, where they had been receiving medical treatment for the past two years.

Early Sunday morning, veterinarians and workers at the Xcaret Marine Turtle Hospital began preparing for the release of the six turtles, who had been found dehydrated and quite weak two years ago.

The transfer from the hospital to the locations where the release was to take place was more complicated than it seemed because the turtles’ good health made them stronger than allowed for and they also became agitated when they smelled the sea breeze.

Most of the turtles were of medium size and could be transported relatively easily in plastic boxes but one individual weighed more than 70 kilograms (154 pounds) and had to be carried by two people.

They were taken to two different reef areas just off the Xcaret tourist park on the channel between Cozumel Island and the mainland.

Andrea Alvarez Peregrina, a veterinarian at the Marine Turtle Hospial, confirmed that three carey (or Hawksbill) sea turtles, two green turtles and one caguama (or Loggerhead) turtle were released, all of them from species in danger of extinction.

Although they arrived at the clinic under different circumstances, all six of the turtles were “hospitalized” for about two years under strict observation by veterinarians. 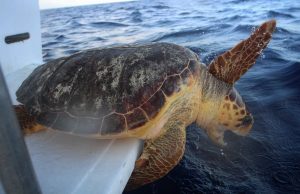 “They arrived in a low-weight and dehydrated condition,” said Alvarez. “Their rehabilitation was carried out with a daily checkup, two meals a day, monitoring how much they ate and, obviously, (noting) whether … they required antibiotherapy or other … treatment. If they come in dehydrated, they’re given saline solution, which they need to get better.”

To be returned to the sea, the turtles have to pass a special review that guarantees that they can feed themselves in a natural environment and that they are medically able to survive.

“Their body condition is looked at closely, they can’t be too fat but not too thin either. They have to be well hydrated, and their attitude (must be good), beginning to swim better and feeding themselves pretty well,” she said.

After these six turtles were reintroduced to the sea, the number of patients at the Xcaret turtle hospital is still relatively large with a number of individuals requiring specialized care.

Just a few days ago, for instance, a young female Loggerhead turtle was admitted with a cranium fracture, having been brought to the hosptial from a Playa del Carmen beach, said Ana Cecilia Negrete, the veterinarian in charge of that location.

Negrete said in an interview with EFE that diagnosing this type of injury required a great deal of time and experience as well as using specialized equipment like scanners and X-ray machines, along with using clinical analyses.

The goal is to reintroduce the animals back into their natural habitat, but it is often a lengthy process to get traumatized individuals back to a state of health sufficient for them to survive in the wild.