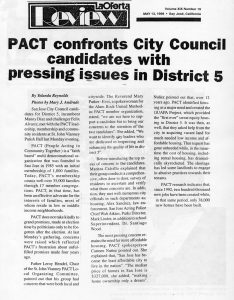 PACT (People Acting in Community Together) is a “faith based” multi denominational organization that was founded in San Jose in 1985 with an initial membership of 1,000 families. Today, PACT’s membership counts well over 35,000 families through 17 member congregations. PACT, in that time, has been an effective advocate for the interests of families, most of whom reside in low or middle income neighborhoods.

PACT does not take kindly to grand promises, made at election time by politicians only to be forgotten after the election. At last Monday’s gathering, concerns were raised which reflected PACT’s frustration about unfulﬁlled promises made four years ago.

Father Leroy Hendel, Chair of the St. John Vianney PACT Local Organizing Committee, pointed out that his group had concerns that were both local and citywide. The Reverend Mary Parker — Eves, a spokeswoman for the Alum Rock United Methodist PACT member organization, stated, “we are not here to support a candidate but to bring our concerns to the attention of the two candidates”. She added, “We want to identify city leaders who are dedicated to improving and enhancing the quality of life in district 5.”

Before introducing the top areas of concern to the candidates, Maritza Calvillo explained that their group conducts a comprehensive, often door to door, survey of residents to ascertain and verify what those concerns are. In addition, they met with numerous city officials in such departments as housing, Alex Sanchez, law enforcement, San Jose Acting Police Chief Walt Atkins, Parks Director, Mark Linder, in addition to school Superintendent, Dr. Santiago Wood.

The most pressing concern remains the need for more affordable housing, PACT spokesperson Carmen Nuñez pointed out. She explained that, “San Jose has become the least affordable city to live in the nation.” “The median price of homes in San Jose is $327,000, she added, “making home ownership only a dream.”

Nuñez pointed out that, over 12 years ago, PACT identified housing as a major need and created the GUAPA Project, which provided the “first ever” sweat equity housing in District 5. It was then, as well, that they asked help from the city in acquiring vacant land for much needed low income and affordable housing. That request has gone unheeded while, in the meantime the cost of housing, including rental housing, has dramatically skyrocketed. The shortage has led some landlords to engage in abusive practices towards their tenants.

PACT research indicates that, since 1992, two hundred thousand new jobs have been created while, in that same period, only 38,000 new homes have been built.

Another major concern of PACT has been the high student dropout rate in local schools. They have also been concerned for adult supervision of school programs. To this end, PACT has been advocating the establishment of “homework centers” for the children. PACT was successful in getting the city to allocate $1.25 million for a number of centers scattered throughout the city. PACT wants homework centers for every school in the city.

They also want the centers to operate 4 days a week, be open to all children, and to have an on-site coordinator with a budget of $10,000 for each elementary school center, $25,000 for each middle and high school center. PACT questioned the decision of the Council to spend $1.8 million on a carousel for the Guadalupe River Park in the downtown area. It has been shown that homework centers attract 75% of a school’s student population to center, which has resulted in a “66% improvement of their grades” and a 38% improvement in school attendance. PACT says that the cost of full funding for the homework centers could be met with a budget of $3 million.

Of equal concern to the residents of District 5 is the lack of community and youth services. Of particular concern is the lack of youth services in an area where ﬁfty percent of the residents are under 25 years of age. PACT has been asking that a Youth Center be established in the Alum Rock area. They also want “Project Crackdown,” a drug abatement program, extended into more locations of District 5 and speciﬁcally, the Mayfair area, where gangs and wannabes have staked out territorial claims which have resulted in a noticeable decline in the appearance of the surrounding areas.

PACT has repeatedly asked that a youth drug rehabilitation center be established both to keep the youth closer to home and to serve more youths seeking help from drug abuse at less cost. Currently, the County spends $1 million to send youths out of the area for rehabilitation from drug abuse. 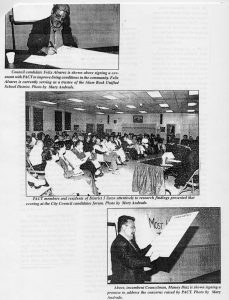 PACT also expects accountability from its elected officials. PACT pointedly stated, “The history of our District 5 representatives has been such that we have almost never received a response to a request to meet in a timely manner which shows respect for the time and effort that PACT leaders put in to researching these concerns.”

A resident, Chris Ortiz, with frustration in his voice, expressly informed Councilman Diaz of his concern for the lack of services for the youth in the District. He said, “I don’t want them (his young siblings, nephews and nieces) tossed into the streets. I don’t want to see any more deaths.”

Others spoke of the need for affordable and properly maintained housing. One woman stated that, from her perspective, the area had a drug epidemic that was being ignored. She also pointed out that city services such as street sweeping and adequate lighting were missing in their area. She explained that such neglect affected the self-image of the residents. It is self-respect that can bring positive change to the area, but the community needs help to make that a reality.

Both candidates, Felix Alvarez and Manny Diaz promised support and enthusiasm for the Priorities established by PACT, Diaz pointed out that funds were limited and that he would be seeking sources from business and charitable foundations.

Dennis Haggerty, a PACT leader and member of the St. John Vianney PACT, summed up the responses. In an unusual instance and to the pleasure of PACT, both candidates were in full agreement with the requests of the PACT group. Still, one skeptical resident earlier asked, how am I to know that “my vote will not go down the drain-if you promise now and four years from now the promises are the same.”

Manny Diaz said that he thought District 5 needed better representation than it has had in the past, primarily because it is one of the most diverse Districts in the city. In regard to youth services and attention to education Diaz said that outgoing Mayor Hammer had done more than any other mayor in this regard. Diaz has been in his office for the last four years.

PACT remains critical of the emphasis, the money spent and the attention given to the downtown to the almost total exclusion of the neighborhoods. Council candidate Felix Alvarez and other critics contend that many expenditures which have been made outside of the downtown have been wasted since such projects have often been imposed on the community with little or no regard for the actual needs or input of the community.

Diaz prepared a glossy and expensive 34-page booklet for distribution among the voters. Alvarez, who believes in grass roots organizing and local interests, is walking the district and talking to the voters. Alvarez currently serves on the Board of Trustees of the Alum Rock School District.