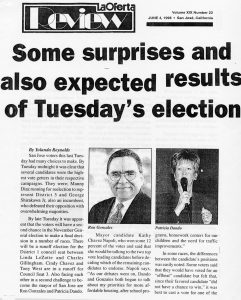 San Jose voters this last Tuesday had many choices to make. By Tuesday midnight it was clear that several candidates were the highest vote getters in their respective campaigns. They were; Manny Diaz running for reelection to represent District 5 and George Shirakawa Jr, also an incumbent, who defeated their opposition with overwhelming majorities.

By late Tuesday it was apparent that the voters will have a second chance in the November General election to make a ﬁnal decision in a number of races. There will be a runoff election for the District 1 council seat between Linda LeZotte and Charles Gillingham. Cindy Chavez and Tony West are in a runoff for Council Seat 3. Also, facing each other in a second challenge to become the mayor of San Jose are Ron Gonzales and Patricia Dando.

Mayor candidate Kathy Chavez Napoli, who won some 12 percent of the votes and said that she would be talking to the two top vote leading candidates before deciding which of the remaining candidates to endorse. Napoli says, “As our debates went on, Dando and Gonzales both began to talk about my priorities for more affordable housing, after school programs, homework centers for our children and the need for traffic improvements.”

In some races, the differences between the candidate’s positions was easily noted. Some voters said that they would have voted for an “offbeat” candidate but felt that, since their favored candidate “did not have a chance to win,” it was best to cast a vote for one of the declared “front runners.”

Of the four candidates, Ron Gonzales had the largest campaign chest to support his bid for Mayor of San Jose. Kathy Chavez Napoli spent the least, only $55,000. Having a large campaign chest is not always an advantage. Al Checchi, who spent more than any other candidate, still came in third in his bid for governor. He spent over $30 million and won only 12% of the votes.

The election returns late Tuesday night showed that San Jose voters, by a small majority, rejected Proposition 226. That Proposition was to require member approval before dues would be used on political issues received a sound defeat. This Proposition was strenuously opposed by many small organizations and union groups.

Proposition 227, the proposal to end bilingual education in public schools was overwhelmingly approved at the local and state level. By midnight Tuesday it had already received 67 percent of the votes in San Jose. The tally was only slightly lower statewide. In the next weeks it is likely that some school districts will challenge the legality of 227, which assumes that a student, regardless of age, can learn a new language in one year.

What happens in the classroom and how well students function under these new rules will be closely monitored by this newspaper and others who are interested in the educational success and experience provided to the students.

Negative campaigning might be less evident in November. In the governor’s race, the allegations that were made and the clever sound bites proved to harm, not only the person against whom they were directed, but the person responsible for the rhetoric. Everyone clamors for campaign reform and wants running for ofﬁce to be less costly but the temptation to use money for polls, clever advertising and marketing to advantage appears to be irresistible in politics both now and into the future.

The one lesson is that big money does make a difference but having a lot of money is not always enough. © La Oferta Newspaper.