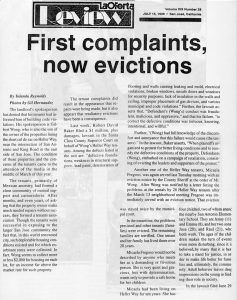 The landlord’s spokesperson has denied that his tenants had informed him of building code violations. His spokesperson is Gilbert Wong, who is also the son of the owner of the properties lining the short cul de sac on Heller Way, near the intersection of San Antonio and King Road in the eastside of San Jose. The condition of these properties and the concerns of the tenants came to the attention of the media in the middle of March of this year.

The tenants, primarily of Mexican ancestry, had formed a close community of mutual support and camaraderie. After months, and even years, of asking that the property owner make much needed repairs without success, they formed a tenants association. Though the tenants were successful in exposing to the larger San Jose community the fact that, in this world-renowned city, such deplorable housing conditions existed and for which exorbitant rents were collected. In fact, Wong seems to collect more or less $2,000 for housing on each lot, for an income far above the market rate for such property.

The tenant complaints did result in the appearance that repairs were being made, but it also appears that retaliatory evictions have been a consequence.

Last week, Robert David Baker filed a $1 million, plus damages, lawsuit in the Santa Clara County Superior Court on behalf of Wong’s Heller Way tenants. Among the defects listed in the suit are: “defective foundations, weakness in structural supports lead paint, deterioration of flooring and walls causing leaking and mold, electrical violations, broken windows, unsafe doors and windows for security purposes, lack of insulation in the walls and ceiling, improper placement of gas devices, and various municipal and code violations.” Further, the lawsuit asserts that, “Defendant’s (Wong’s) conduct was fraudulent, malicious, and oppressive,” and that his failure, “to correct the defective conditions was tortuous, knowing, intentional, and willful.”

Further, “(Wong) had full knowledge of the discomfort and annoyance that this failure would cause (the tenants).” In the lawsuit, Baker asserts, “When plaintiffs organized to protest for better living conditions and to remedy the defective conditions of the property, Defendants (Wong), embarked on a campaign of retaliation, consisting of evicting the leaders and supporters of the protest.”

Another one of the Heller Way tenants, Micaela Fregoso, was again served last Tuesday morning with an eviction notice by the County Sheriff at the order of Mr. Wong. After Wong was notiﬁed by a letter listing the problems at the rentals by 28 Heller Way tenants after the March 13 neighborhood meeting Fregoso was immediately served with an eviction notice. That eviction was stayed twice by the municipal court.

In the meantime, the problems persisted and other tenants (families) were evicted. The remaining families are terriﬁed. One tenant and her family has lived there over 20 years. 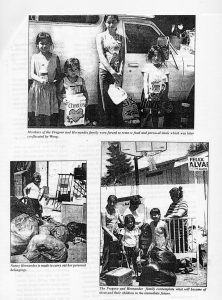 Micaela Fregoso would not be described by anyone who meets her as a demanding or frivolous person. She is very quiet and gracious, but with determination wants only to provide a safe home for her children. Micaela had been living on Heller Way for ten years. She has four children, two of whom attend the nearby San Antonio Elementary School. They are Jenny (11) and Emma (8), and her two sons Jose (20), and Raul (21), who both work. The ages of the children make the turn of events even more disturbing, since it is believed by many that it is best to take a stand for justice, in or der to make life better for families and, ultimately, the community. Adult behavior leaves deep impressions on the young in ﬁnding their role in society.

In the lawsuit filed June 29 1998, Baker states, “the conduct of Defendants (Wong) was and continues to be outrageous and beyond the bounds of all human decency.”

Following the lawsuit, which was filed June 29, a number of the tenants reportedly received notice that evictions would be in order for such tenant infractions as keeping a pet on the property, barbecuing in the vicinity of the dwellings and violating other similar restrictions. Barbecuing was a frequent and joyful pastime of the families living along that street.

Asked if Mr. Wong planned to sell his properties on Heller Way, his attorney, Nicolas Palumbo responded “No.”

At a previous stroll down the street (in March), the publisher of this newspaper asked three young boys astride their bicycles what they thought would happen as a consequence of the rush of attention to the conditions of their homes. Without hesitation, one child responded, “They’ve come before and made a lot of promises but nothing happens.”

That is a sad observation, in particular, since the young man wondered aloud, “I don‘t know why they leave this place like this – it doesn’t look like this in other parts of town.”

As young as he was, he sensed a lack of respect and concern for the situation in the neighborhood he considers his home.

By Tuesday-afternoon, Micaela and her children had gathered as much as they could for the move. A box was in the hallway filled with toys, dolls and stuffed animals. Garbage bags in place of suitcases contained their clothing and were set out in the driveway. Furniture remained in place because there was no place available for its storage, much less a means to transport it away for storage.

Gil Hernandez, a local businessman, community advocate and noted sculptor, along with Grace Renteria, a family advocate with the organization, “Resources for Families and Communities,” spent much of Tuesday afternoon contacting the various community services whose mission is described as providing help for families in times of stress. They were promised offers of additional help. Renteria prevented the eviction, for a short while, of all of the tenants in the Fregoso household.

Though Wong and his emissaries first offered to stop the lawsuit by a promise to Micaela of $3,000 towards her moving expenses and for a written statement that she would remove her name as a plaintiff in tenant’s lawsuit. The offer was so vague that it was never seriously considered, said Micaela.

There are many ironies in the situation. Mr. Wong himself is reportedly an immigrant from mainland China, coming here shortly before the Kumintang lost to the Communists. According to the tenants, when he was questioned as to why he seemed to prefer “mejicanos,” the response was, “they don’t complain.”

Though calls were made to the offices of Councilman Manny Diaz, County Supervisor Blanca Alvarado and the City office of Code Enforcement and all promised to “look into the matter, talk to Fregoso, and provide help,” the only immediate official contact occurred when Gilbert Wong, his helpers, “Luis” and other employees, accompanied by an officer of the San Jose Police department, came by to physically remove her household items some of which were already out of doors in the driveway. Fregoso’s sons slept that night in the driveway so that the furniture would not be stolen since they had to locate a truck to take her furniture to a place of storage.

Micaela explained that she had no idea where her furniture and possessions had been taken nor how she might retrieve them. She broke down in tears when she explained that Wong even carted away the milk and freshly purchased chickens and vegetables. Still in tears, she said, “I have nothing to feed my children —they are hungry.”

There are many questions here for which there must be answers. Why has the landlord been able to avoid sanctions from the city when it is obvious that code violations have been the norm? There are major structural defects and violations but these, too, seem to have been overlooked. Other cities have been able to force recalcitrant property owners to obey the laws of the state and city by establishing an account into which the rents are paid while making the necessary repairs. Overcrowding would likely be avoided and even prevented if more reasonable rents were collected relative to the small size of the dwellings. Tenants would not be tempted to convert dining areas, and hallways and build lean to additions, etc. into sleeping spaces in order to meet the high rental fees.

Why should people have to do the work of the city – it would have been a blotch on the reputation of the City had lives been lost because of the serious defects allowed in some of these homes.

Perhaps, if the lawsuit succeeds this landlord will understand that to charge “market rate” rents and to have unsatisfied tenants is a real problem and that, in the long run, modest profits and fair treatment of the customer is, after all, the best company policy.

Attorney Bob Baker says that the suit has; “two aims, that of removing the constant threat of eviction when concerns are raised by the tenants and to make Wong give up some of his ill-gotten proﬁts.” © La Oferta Newspaper.