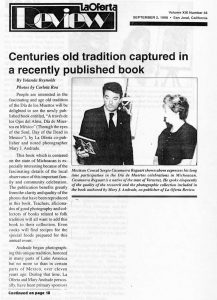 People are interested in the fascinating and age old tradition of the Día de los Muertos will be delighted to see the newly published book entitled, “A través de los Ojos del Alma, Día de Muertos en México” (Through the eyes of the Soul, Day of the Dead in Mexico”), by La Oferta co-publisher and noted photographer Mary J. Andrade.

This book which is centered on the state of Michoacán is especially interesting because of the fascinating details of the local observance of this important family and community celebration. The publication beneﬁts greatly from the clarity and quality of the photos that have been reproduced in this book. Teachers, aficionados of good photography and collectors of books related to folk tradition will all want to add this book to their collection. Even cooks will find recipes for the special foods prepared for this annual event.

Andrade began photographing this unique tradition, honored in many parts of Latin America but no more so than in certain parts of Mexico, over eleven years ago. During that time, La Oferta and Mary Andrade personally, have been primary sponsors of many exhibits and events surrounding this tradition. Exhibits of Andrade’s investigations and photos of this very special spiritual and traditional event have been held in many of the major cities of the United States, Latin America, (including Mexico) and

Spain. This celebration, in memory of those who have died, brings not only families but entire communities together. This event that honors the dead is not as sad as one would expect because of the way in which it celebrates their memory and their legacy to the family.

This first volume “highlights Día de Muertos traditions in the Mexican state of Michoacán, where Mary J. Andrade began her investigation in 1987 on the island of Janitzio in Lake Pátzcuaro. Included in this volume are subsequent investigations of other islands and towns, including Pacanda, Zirahuen, Ihuatzio, Cucuchucho and Tzintzuntzan, with the express objective of establishing a visual route and history that can easily be followed by future visitors to Michoacan.”

In this first book, Andrade presents over 70 color photographs and essays on the loving altars, tombs, artisan works, rituals, costumes, and favorite foods used to express the continued connection felt between living families and their deceased.

The text, written in English and Spanish, explains the contrasts between the quiet dignity of vigilance and visitation as well as the loud, colorful and musical expressions of love and remembrance. It offers the introduction written by the Mexican Archaeologist Eduardo Merlo Juarez, a poem about  the tradition written by the Spanish poet Julie Sopetran, and descriptions of each element on the altars as well as recipes of the traditional offerings such as pan de muerto, huchepos, corundas and atole.

Mary Andrade’s extensive travel throughout Mexico has resulted in a photographic study of exceptional and profound signiﬁcance. As U.S. commercial traditions of Halloween encroach into every corner of indigenous and Mestizo Mexico, Dia de Muertos is quickly changing its very foundations of beliefs and customs.

Future editions will include Dia de Muertos studies from Mexico City, Mixquic, and the states of Oaxaca, Puebla, Tlaxcala, and Morelos. Images and information concerning these visits can be seen on the Internet at web address: http://www.dayof thedead.com

“Through the Eyes of the Soul, Day of the Dead in Mexico,” “A través de los Ojos del Alma, Día de Muertos en México,” Michoacán edition, is published with the support of San Francisco Bay Area Award winning weekly newspaper, “La Oferta Review” and by the Office of the State Secretary of Promotion and Tourism in Morelia, Michoacán. © La Oferta Newspaper.