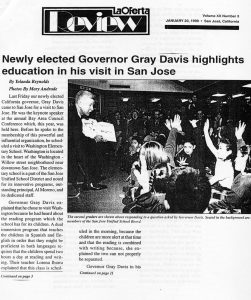 Last Friday our newly elected California governor, Gray Davis came to San Jose for a visit. He was the keynote speaker at the annual Bay Area Council Conference which, this year, was held here. Before he spoke to the membership of this powerful and inﬂuential organization, he scheduled a visit to Washington Elementary School. Washington is located in the heart of the Washington – Willow street neighborhood near downtown San Jose. The elementary school is a part of the San Jose Unified School District and noted for its innovative programs, outstanding principal, Al Moreno, and its dedicated staff.

Governor Gray Davis explained that he chose to visit Washington because he had heard about the reading program which the school has for its children. A dual immersion program that teaches the children in Spanish and English in order that they might be proficient in both languages requires that the children spend two hours a day at reading and writing. Their teacher Lorena Ibarra explained that this class is scheduled in the morning, because the children are more alert at that time and that the reading is combined with writing because, she explained the two cannot properly be separated.

Governor Gray Davis in his noontime speech to the hundreds of Bay Area business and industry leaders gathered for the conference, explained that he has set a goal that all California school children will be able to read and comprehend what they read by age 9.

Governor Gray Davis has stated repeatedly that education is a priority for his administration. He described a number of programs that he intended to improve California schools. These strategies range from providing rewards such as $5,000 to schools that allocate more time to reading, and to increase, in a measurable way, the number of books that the children read.

He is impressed with the reports of success of the reading program at Washington and another, in a “school near Sacramento, in which the participating children improved the reading in one short year to grade level and above where, before their performance had been the lowest in the state. He says that he also wants to increase teacher and principal accountability. He intends to provide more opportunities for staff development including that of the principals. Davis remarked that it had come to his attention that when a school had a “good principal and parents were involved” it seemed to make the difference in the learning that took place in the school. He said that legislators who shared his vision would be introducing legislation which would require accountability regarding student performance from the school and specific monetary rewards for the acquisition of post graduate degrees and study. He pointed out that the children who developed bilingual skills, early in life, showed overall improved academic skills.

Davis was asked how he expected to improve the economic situation for education in the state without raising taxes. He responded that it was his hope that the schools would make noticeable improvements in student’s achievement and thereby move the taxpayer to vote for tax increases to help the schools move further along in this endeavor. Across the state and in the Valley, it has been demonstrated that the taxpayers will vote to support schools if they feel the need is genuine and that the school has done all that it can with their existing resources. Several years ago, taxpayers in the San Jose Uniﬁed attendance area voted for a parcel tax increase when it became apparent to them that additional funds were absolutely necessary to make the District’s schools safe, comfortable and adequate to accommodate modern teaching equipment.

At his visit Gray read a story, The Little Engine That Could. It was intriguing to observe the intensity with which the children became engrossed in the story about the little train that needed courage to make it over the hill and into the next valley. Governor Davis attempted to get the children involved in a dialogue. That was less successful. That short time with the children revealed that it does take more than just good intentions, enthusiasm and ability. A teacher must be artful in drawing the children in conversation. To become an effective teacher requires training and hours of experience. Davis in that short while did achieve a rapport with the children and his interest in them was credible.

A number of parents and concerned community came by to witness the Governor’s historic visit. One of the parents Anabel Bolanos, a mother of three, two of whom attend Washington school, speaking in Spanish said, “he made us proud with his visit – we think this is a very good school – we love our principal he is so good.” Yolanda Candelario also the mother of three, two of whom attend Washington Elementary and another who just graduated from the school, in Spanish explained that she nor the others nearby mothers spoke English and added that but she, too, “was pleased with the honor that the Governor had bestowed on Washington Elementary by his visit.” Sra. Candelario proudly added that her oldest daughter was enrolled in the Science Magnate program at Bret Harte Middle School.

Governor Davis said that he intended to routinely visit schools around the state. He said that he will do this in order to highlight the good work that is taking place in many of the state’s school and to also “raise the bar” on the performance of all schools in the state. He explained that, by the end of his ﬁrst term, he wants to know that education in California is first in the nation.

Among the more controversial programs he intends to implement will be a comprehensive state standardized exit test in order to graduate from high school.

ln response to a question regarding teacher pay and the high cost of living in the Bay Area Davis stated that he has a committee looking into this issue in order to develop a method to provide subsidies for people who perform vital services in the community but are unable to live in the communities in which they work because their salaries are not sufficient. He said that the committee had been looking at this problem, which affects police and fire workers and that he wanted its scope of work to include teachers.

High living costs and low salaries stymie the recruitment and retention of good workers and discourages smart and able people front thinking of choosing such a career. For good teachers who care about their students, in particular those who work in what is now termed low wealth (low income), the problem of low salaries is onerous. It is not unusual for these teachers to spend from $1,000 to over $3,000 per year for supplies for the classroom or aids for teaching and even school supplies for the very poorest children in their classes.

Working in such a setting and dealing with the pressures of trying to meet the needs oftentimes of over 30 children per class, is a prescription for burnout and induces feelings of disrespect for the important role of a teacher.

Davis said that, in the last de-cades. Californians, including its leaders, “had walked away from education.” He says that he intends to reverse that situation and make education a priority. He feels that without a well-educated populace the state cannot retain its prominence as an economic leader in the nation. He also feels that it is imperative that California’s children are educated and able to fill the jobs of the future.

For those Concerned for the future, the statements of Governor Davis this last Friday and the priorities for education made by newly elected San Jose Mayor Ron Gonzales, gives hope that our long neglected schools and the quality of the education that is provided in California will once again be a matter of pride and can demonstrate stellar achievements. © La Oferta Newspaper.