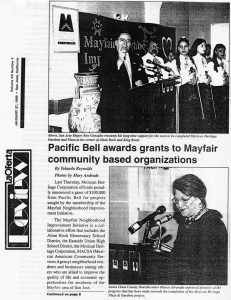 Last Thursday, Mexican Heritage Corporation ofﬁcials proudly announced a grant of $100,000 from Pacific Bell for projects sought by the membership of the Mayfair Neighborhood Improvement Initiative.

The Mayfair Neighborhood Improvement Initiative is a collaborative effort that includes the Alum Rock Elementary School District, the Eastside Union High School District, the Mexican Heritage Corporation, MACSA (Mexican American Community Services Agency) neighborhood residents and businesses among others who are allied to improve the quality of life and economic opportunities for residents of the Mayfair area of San Jose.

The group has been meeting for almost two years and has begun quite a number of resident inspired and developed projects. Among the participants have been educators, law enforcement, residents, executives of community based organizations and religious leaders, among others.

At the gathering, Mark Walker, an Executive Director of Paciﬁc Bell, announced that the gift from the telephone company to the Initiative was intended to help the Mexican Heritage Corporation (MHC) in support of their Heritage Arts Education programs by a grant of $50,000.

Monica Gomez, of the Mexican Heritage Corporation, explained that the Heritage Arts Education Program consisted of three major projects: the Mariachi Youth Program, which is an after school program where children learn to play and sing mariachi music; the Culture Camp, and after school spring semester program where children can learn from master artists such as Aztec Dance, theater, traditional arts and crafts; and the third program is a Heritage Arts Program provided by schools serving the neighborhood.

A demonstration of the success of the Mariachi Program was made evident by the performance of the youthful musicians, members of Las Estrellas Mariachi, at the beginning and end of the press gathering last Thursday.

The MHC Mariachi Program includes a Mariachi Festival and Conference which MHC officials say is one of the most successful of the events which they sponsor and has become a “core component” of this program. It is rare that a large gathering in San Jose today does not enjoy the romantic and exquisite sounds and songs of the Mariachi tradition.

Walker also presented another check of $50,000 to the Mayfair Neighborhood Improvement Initiative’s Beautiﬁcation and Economic Committee. On hand to receive that check, on behalf of the committee and the Mayfair residents, were Leola Brown and Naomi Perez. Perez explained that she had lived in that neighborhood “since 1948” and added that she was, “very proud of her neighbors and thankful for the attention now given the neighborhood.” Brown said that the committee would put the grant to use in ﬁnding ways to enhance the economic development and opportunities of the residents of that neighborhood.

Alum Rock School District records show that many families in that area are low income. The Pacific Bell Grant is intended to assist in a job skills assessment for the residents of the Mayfair area and also to ascertain the kind of job training that would help residents acquire new skills or provide opportunities for them to upgrade their skills.

Yolanda Vega explained to La Oferta that, until the survey and assessments are completed, the exact programs will not be determined. She explained that such courses as computer training, career counseling, resume writing, job interview techniques and role playing are possibilities. Vega explained that an “economic summit” is planned in order to bring job training organizations together in order to determine job training associations or collaborations for this endeavor. She said, “we will partner with other existing training organizations.”

San Jose is home to CET (Center for Employment Training), an organization recognized around the world for its outstanding job training and job placement of its students. Besides the universities and community colleges in the area, many secondary schools, adult education, vocational schools and another job training program, the Center for Training Careers (CTC), are actually located in or near San Jose. The possibilities for collaboration are many and should prove much scope for innovation.

A portion of the $50,000 is also to be used to help small businesses in the area. Currently there are two business associations in the area, the Alum Rock and Story Road Business Associations.

San Jose City Councilman, Manny Diaz, proudly pointed out that approximately $300 million were in the pipeline for that area of District 5. Among the planned projects is the completion of the Mexican Heritage Gardens and Plaza at the comer of Alum Rock and King Road.

Numerous efforts at improving depressed neighborhoods across the nation have collapsed. City leaders hope that this comprehensive collaborative effort which includes broad resident community representation and all of the community based organizations and governmental agencies serving the neighborhood will become a successful and lasting model of success.

Major donors to this innovative project have been the Hewlett Foundation and the Community Foundation.

Alum Rock Union Elementary School District Superintendent Dr. Santiago Wood points out that research shows that music, the arts and culture have a positive correlation to academic performance. “They (music and the arts) are a gateway to disciplined learning,” he adds. “An example is the scores of the student achievement test (SAT9) at Rogers Elementary where the teachers immersed the students in listening to classical music in preparation for the test. Rogers improved its scores and it is the highest performing school in the district on those tests where the students performed at the statewide average.” Dr. Wood added that, “research also shows that learning to play a musical instrument helps a student develop the cognitive skills needed in learning mathematics. Because of this we sought VIP (State) funds for our district which has allowed us to provide an option to learn music in all of our 19 elementary schools and this year we extended it to all of our 5 middle schools,” he explains.

The Superintendent says it is great that the Mexican Heritage Cultural Center was awarded $50,000 to help in this effort. “The Mariachi Estrella students which just got started last April is a marvelous program — their performance is awesome,” he states. He added, “We have another Mariachi group made up of younger students in the district which is named Mariachi Cobre Plata at Dorsa Elementary and we have also the famous Alum Rock Jazz Band.” (This last group gave an impressive performance at the opening of a CABE, California Association of Bilingual Educators, Conference several years ago).

Wood points out that it was California Senator John Vasconcellos and Assemblymen Mike Honda and Jim Cuneen who helped the Alum Rock District obtain this important VIP funding which had enable the District to provide these enrichment programs to their students.

Victor Perez proudly points out that he has been involved with El Teatro de Los Pobres since he was 14 years old. he is now 34. El Teatro has been an important contributor towards the arts that provides numerous programs and opportunities to the community regardless of age and at no expense other than their enthusiasm and commitment.

It is encouraging that so many different organizations and leaders in the community have come to the aid of children. The newly elected mayor of San Jose, Ron Gonzales. was present at the recent press conference to witness the Pacific Bell award intended as a measure of some help in improving the quality of life to the residents of the Mayfair area.

For information on the Mariachi Youth Program, the Culture Camp of the Heritage Arts in Education Program, contact Monica Gomez at (408) 292-5297. © La Oferta Newspaper.