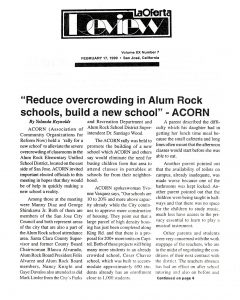 ACORN (Association of Community Organizations for Reform Now) held a ‘rally for a new school’ to alleviate the severe overcrowding of classrooms in the Alum Rock Elementary Unified School District, located on the east side of San Jose. ACORN invited important elected officials to this meeting in hopes that they would be of help in quickly making a new school a reality.

Among those at the meeting were Manny Diaz and George Shirakawa Jr. Both of them are members of the San Jose City Council and both represent areas of the city that are also a part of the Alum Rock school attendance area. Santa Clara County Supervisor and former County Board Chairwoman Blanca Alvarado, Alum Rock Board President Felix Alvarez and Alum Rock Board members, Nancy Knight and Gaye Davalos also attended as did Mark Linder from the City’s Parks and Recreation Department and Alum Rock School District Superintendent Dr. Santiago Wood.

The ACORN rally was held to promote the building of a new school which ACORN and others say would eliminate the need for busing children from that area to attend classes in portables at schools far from their neighborhood.

ACORN spokeswoman Yvonne Vasquez says, “Our schools are 10 to 20% and more above capacity already while the City continues to approve more construction of housing. They point out that a large parcel of high density housing has just been completed along King Rd. and that there is a proposal for 200+ more units on Capitol. Both of these projects will bring many more students to an already crowded school, Cesar Chavez school, which was built to accommodate approximately 600 students already has an enrollment close to 1.000 students.

A parent described the difficulty which his daughter had in getting her lunch time meal because the small cafeteria and long lines often meant that the afternoon classes would start before she was able to eat.

Another parent pointed out that the availability of toilets on campus, already inadequate, was made worse because one of the bathrooms was kept locked. Another parent pointed out that the children were being taught in hallways and that there was no space for the children to study music, much less have access to the privacy essential to learn to play a musical instrument.

Other parents and students were very concerned with the work stoppage of the teachers, who are in the midst of negotiating the conditions of their next contract with the district. The teachers absence has had an effect on after school tutoring and also on before and after school supervision of the youth. This has produced a very real fear in the hearts of the parents and the youth as well.

Alicia Mota, an ACORN member and community advocate, says, “It’s not just – our goals are for the greater good for our children.” She added, “They deserve a better school and a better place to learn we need to find another school site as soon as possible.”

Current Alum Rock Board President Felix Alvarez, a long-time proponent for another school in an area that had long lacked such a facility was obviously pleased with the strong support for a school for this area which encompasses so many households having school age children who reside in the vicinity of the north side of Alum Rock and the areas west and east of King Rd.

Councilman Diaz promised his support for the proposed school. He emphasized that support by enumerating the many projects and plans which he has for that area of District 5, which he represents on the San Jose City Council. He said that he was especially concerned for the children, who because of crowding, were bused away from the Miller School area for just one year.

Alvarez had pointed out the problems which the parents had in tracking the progress of their children because of the obvious benefits of a neighborhood school, to which both parents and children could identify.

He also indicated his hope that the school could be built on property at the Alexian Brothers Hospital. site. This site had been intended for a major hospital expansion before a recent hospital exchange which does not provide for such an expansion.

Alvarado pointed out that “schools were in state of crisis and that much more room is needed”. She felt that, by working together, the City, County and school officials could find a solution adding, “we must see to it that community services are provided for the community.”

Alvarez pointed out that the District is not conﬁned to the consideration of only one possible site and that others will be looked at. He asked that the ‘New School’ be placed on the Board agenda of March 11, in order to have a full Board and community discussion of this important proposal.

“Now I really need a lot of friends,” Dr. Wood told those gathered at Cesar Chavez school. He reminded those assembled at the evening meeting, “it takes everyone to educate everyone”. “We need your help in improving student’s performance, he added. Wood pointed out the importance of education in the Valley where he says, 60% of the inventions that are made in the United States are made right here in Silicon Valley.” He added, “we must work to equalize the playing field so that the children can achieve and compete for the many opportunities that are here.” “We must hold everyone accountable and raise the bar.” He reminded ACORN and their other supporters that the District, “now has a Board that you endorsed and elected.”

Wood promised to address those problems raised by parents for which solutions seemed possible. He stated again, as he has in the past, that Alum Rock teachers are caring and competent and was confident that the salary negotiations would be settled shortly, however he promised that this would not come at the expense of keeping the District solvent, nor at the expense of the students. He pointed out that the District had just finished spending $17 million to reduce class size in all of the District’s K-3 classrooms. Along with that reduction of class size there is also an additional ongoing expense of paying for additional teachers.

Wood pointed out the shocking fact that teachers, whose work affects so many, are paid at most $60,000, while an athlete like Michael Jordan is paid $120 million a year to play ball. He said that he and his staff are working hard to find the funds that will help make the new school a reality.

A parent, Dolores Marquez, pointed out that, years ago, a bond issue was passed by the voters which included the promise of a new school for the area now under consideration. She also reminded the parents to vote for the Eastside Union High School bond in the coming election. Its passage is necessary to construct a new high school for that area.

According to reports, the Alum Rock school teachers rank number 1 in compensation among the 22 elementary school districts in Santa Clara Valley. The teachers have been asking for a raise with increased beneﬁts and better work conditions which would amount to a 13% increase in salary. The state has only increased funds to California schools by 2%. Alum Rock is considered to be a ‘low wealth’ district and receives only $4,094 per student while the average for other districts is $4,113.

The unfortunate fact is that the newly elected Governor of California, who has made ‘education’ the center piece of his administration is not intending to increase the budget for schools. He says that the performance of the students must improve before he will seek additional taxes for the operation (teacher’s salaries) of the schools.

Criticism has been leveled at the Superintendent because he was recently awarded a salary increase. His performance and leadership of the Alum Rock District has created great interest in him from other Districts, almost all of whom pay far better salaries than what he was earning in Alum Rock. His raise puts him at the mid-level in terms of comparable compensation statewide. Alum Rock is the largest elementary district in northern California and the 6th largest in the state.