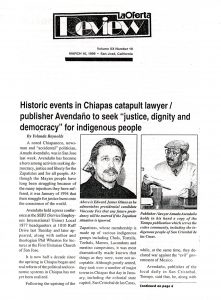 A noted Chiapaneco, newsman and “accidental” politician, Amado Avendaño, was in San Jose last week. Avendaño has become a hero among activists seeking democracy, justice and liberty for the Zapatistas and for all people. Although the Mayan people have long been struggling because of the many injustices they have suffered, it was January of 1994 that their struggle for justice burst onto the conscience of the world.

Avendaño held a press conference at the SEIU (Service Employees International Union) Local 1877 headquarters at 1010 Ruff Drive last Tuesday and later appeared, along with author and theologian Phil Wheaton for lectures at the First Unitarian Church of San lose.

It is now half a decade since the uprising in Chiapas began and real reform of the political and economic systems in Chiapas has not yet been realized.

Following the uprising of the Zapatistas, whose membership is made up of various indigenous groups including Chols, Toztzils, Tzeltals, Mames, Lacandons and mestizo campesinos, it was most dramatically made known that things as they were, weren’t acceptable. Although poorly armed, they took over a number of major towns in Chiapas that day in January, including the colonial state capitol, San Cristobal de las Casas, while, at the same time, they declared war against the “evil” government of Mexico.

Avendaño, publisher of the local daily in San Cristobal, Tiempo. said that, he, along with other members of the media, hurried into local zocalo (central park) of the city for information and details of the uprising. He said that, until the actual takeover of the city, he did not know what was happening nor how it happened.

Avendaño said that there was actually very little bloodshed during the uprising. This, Avendaño explained, was because the Zapatistas, with their army known as the Zapatista Army of National Liberation, infiltrated the ranks of the local police. They chose New Year’s Day, a day of celebration and, he says, the Zapatistas offered to work the holiday and most other

officers suspecting nothing took off. The Zapatistas easily took command of the government buildings but, later, there were bloody skirmishes with government forces. The fighting went on in Las Casas and in other towns such as Ocosingo, until a cease fire was agreed upon. The Zapatistas agreed to the cease fire but would not agree to the government’s proposals without consultation with their communities regarding those proposals.

By this time there were over thirty Chiapan municipalities under the inﬂuence of the Zapatistas.cIn the meantime, the government began to assign thousands of soldiers to the Chiapan country side. Reports indicate that there are now 70,000 government troops in Chiapas and numerous government and establishment supported paramilitary groups spread throughout the countryside to harass and fight the Zapatistas.

Avendaño explained that there were people in Chiapas who, over the years, have tried to give a voice to the indigenous people of Chiapas. He spoke about Fray Bartolome de las Casas, the first Bishop of Chiapas, who, in the mid fifteen hundreds succeeded in banning Indian slavery. His efforts on their behalf earned him the hostility of the European colonists, who drove las Casas from Chiapas. Today, others, most notably Bishop Samuel Ruiz Garcia, Subcomandante Marcos and Amado Avendaño have supported the cause of the Mayan descendants in Chiapas and, because of that effort he promoted the cause of other indigenous communities throughout Mexico and the Americas.

Avendaño explained that Chiapas has a very stratified society of which the indigenous people form the very bottom rung. Avendaño explained that when Bishop Ruiz Garcia first arrived in Chiapas from his state of birth Guanajuato, Mexico, he followed the rituals of the previous bishop whereby he was entertained at afternoon social gatherings of the elite for the traditional cup of chocolate, but he quickly felt a need to talk to the Indian people and, to do this, learned a number of Mayan dialects. The first language he learned was Tzeltal from the Tzeltal cook at the bishop’s house. Bishop Ruiz eventually learned four different local languages. Learning to speak the local indigenous language helped the Bishop to learn more of the personal and collective history of these large and historically oppressed communities, while also earning their respect and trust. Bishop Ruiz came to Chiapas at the age of 31 and has been there since. This year, at 75 years of age, he will retire.

The hundreds of years of abuse of the indigenous people has rendered them intensely mistrusting. Avendaño explained that if a kindness is shown to the Indians they automatically wonder what cost will be exacted of them for this unsolicited favor.

Avendaño said that he became more knowledgeable regarding the indigenous experience from contact with people from the various tribes and by publishing in their own words articles regarding them. He has done this for the last 15 years.

It was his interest in the indigenous community that won him their respect. He explained that his direct involvement in politics came after returning home from a media conference, when he was advised by his family that he should run for governor of the State. He was not too excited about taking on this role. Then he was sought out by the Zapatistas to consider running for governor. The reason for his need to run, he was reminded, rested in the fact that he did care about all of the people of Chiapas and, as important, if elected he would be the first governor of that state who was actually a resident of that state.

He agreed to run. That decision almost cost him his life. He explained that he was very surprised at the support he received but, upon reflection, the reasons for his support were obvious. Number 1, he had support of the Zapatistas. He was also well known in the largest city of the state because of his reputation as the owner/publisher of the respected Tiempo newspaper and was also native son of a coastal municipality that was proud to claim him as one of them.

His campaign was going very well and all predicted that he would be the winner. In order to run for office, he had to be a member of one of the recognized political parties. He chose the PRD (Partido Revolucionario Democratico) because he could not andwould not be entered as a member of the PRI party. The PRI has beenin control of Mexico for the last 70 years.

A debate was scheduled for the contestants. Avendaño, with five others was in a “combi” headed to the debate when a huge semi suddenly veered into their path and hit them head on. Avendaño was seriously injured, three were killed and three, including Avendaño, survived.

Avendaño said that, for three days, he lay in the hospital with serious chest and head injuries and scant attention. He credits his life to the intervention of Subcomandante Marcos who sent a two-word communication to Mexican President Ernesto Zedillo. The words were “Sálvalo-Sálvanse.” Within a few hours of receipt of this communication, Avendaño says, the President sent a plane for him and he was taken to the best hospital in Mexico City. The President sent out a request for the 20 best doctors in the land to take care of Sr. Avendaño. After weeks of being in a coma and eight major surgeries on his face and others to correct the damage to his chest, he survived this terrible “accident.” The driver of the truck and details of why the “accident” occurred have never been revealed. In any case, Sr. Avendaño appears to be in good health now and obvious effects of the accident are not apparent.

To the surprise of many the PRI declared victory. Instead of conceding defeat and because major electoral fraud was suspected, Avendaño was declared governor by the Zapatistas. The results of the election remain in dispute.

Avendaño explained that the Zapatistas had many reasons for their uprising but, one of their, major concerns, then as now, has been the NAFTA agreement and its impact on their livelihood.

The elimination of Article 27 in the Mexican Constitution was especially troubling to the Zapatistas. Article 27 was a land reform statute implemented after the Mexican revolution that established the ejido system in Mexico. Ejidos resulted from the redistribution of lands that were in the hands of just a few people, while the great majority of Mexicans had none and therefore no way to provide for themselves and their families.

La Oferta asked at the NAHP (National Association of Hispanic Publishers), held last week at Huntington Beach, of the presidential candidate, Vicente Fox, if he would reinstate Article 27 if he were elected in the year 2000 election. He did not respond to that specific request but he did say that he would immediately schedule a meeting with the Zapatistas. He added, “If they are serious about economic development there is common interest and we will have something to discuss”. Fox, a graduate of Harvard University in the US, is an ardent advocate of NAFTA but always adds that it must have a “human face”.

The Zapatistas will be holding a national “consulta” to request opinions on the reinstatement of Article 27. This article has much to recommend it, however, it was never fully implemented nor is it the complete answer to the needs of the landless in Mexico. Generations of inheritance have reduced some lands to such small parcels that viable production is impossible. However, people whose base has been agriculture find that, without land, their lifestyle, traditions and culture lost forever.

Contrary to an Internet request for funds for the consulta, Subcomandante Marcos clarify in a letter that Zapatistas are not asking for money.

Avendaño describes his first visit with the leadership of the Zapatistas. To his amazement, one of the Comandantes was a student of his from 10 years before. Worried for his well-being, Avendaño mildly scolded him for becoming involved in such a chimerical endeavor. He realized that his role as a teacher had ended when the Commandante explained that if he did not agree with the objectives of the Zapatistas he, Avendaño, should leave. Avendaño did not leave.

Avendaño is not directly involved with the Zapatistas, but does help them by submitting the communications produced by the group, most prominently those submitted by Subcomandante Marcos to the world’s press. Avendaño explained that their grand vision is neither Marxist, socialist or anti-capitalist but is a vision based on the indigenous experience and a search for dignity, justice and democracy.

Avendaño’s visit to San Jose was sponsored by the grass roots organization known as “The Alliance for Democracy.” The Alliance, based in the United States, describes itself as a populist movement. It is especially concerned for the power and influence on government shown by the major corporations which they say affects such varied aspects of modern life as politics, the workplace, care of the environment, and international policy. The Alliance contends that neither of the two major parties, Democrat or Republican, will address those problems that are consequent to the power and inﬂuence of the large multinational corporations. Among these problems is the loss of local autonomy and individual autonomy.

“The Alliance shares the issues raised by the Zapatistas as well as their vision of a society governed on the basis of justice, dignity and democracy,” says Nancy Price, National Vice-Chair of the Alliance for Democracy.

The Alliance for Democracy has planned its annual Conference for April 29 – May 3 at the College Inn, at the University of Colorado at Boulder. For more information on the Conference and the Alliance, the address is PO. Box 683 Lincoln, Maine 01773. The telephone number is (781) 259-9395. The E-mail address is peoplesall@aol.com. Their Website is: eal.com/alliance. © La Oferta Newspaper.