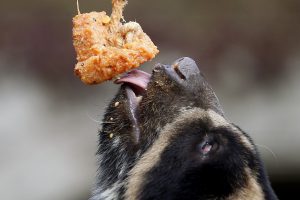 Medellin, Colombia, Jan 19 (EFE).- Ice cream, copious amounts of water and refreshing baths are all part of the “Wild Coolness” initiative being undertaken by the staff at the Santa Fee Zoo in Medellin, Colombia, on Sunday in an effort to help the zoo’s animals cope with the current heat wave.

On the weekend, besides receiving their allotments of regular food, the menu has been enhanced with pallets of fruit, meat and entrails (in the case of the carnivores) to reduce the impact of the high temperatures.

Veterinarian and zoo staffer Julio Oyola Ceballos, the head of the Santa Fe Zoo Biodiversity Department, told EFE that the aim of the program is to “lower the heat levels that can (affect) all species.”

The long-tailed monkeys were the first to be refreshed with ice cream containing chunks of fruit strategically placed in their cages or habitats and which they enjoyed under the delighted gaze of zoo visitors. 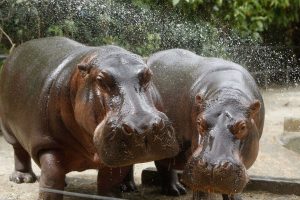 For the spectacled bears, besides receiving abundant popsicles and other cooling refreshments, they were “stimulated” by zookeepers with colorful balls so that they entered the pools in their habitats more frequently, thus giving the general public a view of them in the bath.

Meanwhile, the bison received frozen mangos and the spider monkeys played in a pool with flowers and leaves. The hippopotami stuffed themselves with huge amounts of frozen watermelon and enjoyed cold water baths – all in the name of cooling down the exotic animals at the zoo.

Oyola said that the high temperatures “reduce the metabolism levels in the largest animals,” and so they will be “cooped up and less active,” and the hot weather can also “create stress” in smaller species.

The veterinarian emphasized that the zoo animals can escape from the sun’s direct rays and also get frequent access to fresh water.

The Wild Coolness program also includes chats for the public about climate change and caring for biodiversity and Oyola said that the animals that most enjoy all the program’s activities are the bears, lions and hippopotami, but really “it’s the primates who are the ones who love the popsicles.”

Colombia has been experiencing high temperatures since the first of the year and, according to the Hydrology, Meteorology and Environmental Studies Institute (Ideam), the dry season will last until mid-March, thus increasing the threat of forest fires in the areas along the Caribbean coast, Orinoquia and in some portions of the Andean region.