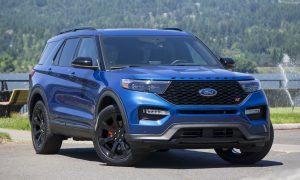 The redesigned 2020 Ford Explorer has improved handling, a lineup of peppy engines, and a lengthy list of standard safety features. Though it’s much improved, the Explorer is up against some outstanding rivals and places near the bottom of our midsize SUV rankings.

The good news is that its 2020 redesign includes significant changes, and the result is a much improved three-row SUV. The Explorer is built on a new platform that improves its handling, makes it feel airy inside, and boosts its towing capacity. Its engines – including a lively and fuel-efficient turbocharged base four-cylinder – are among the most powerful in the class.

In most models, the Explorer now comes with only six seats. Its second-row captain’s chairs provide a nice amount of legroom, can quickly slide forward, and offer space in between for kids to jump back to the third row.

Even the base trim comes with an impressive number of standard features. These include a highly praised infotainment system that quickly connects to your smartphone, thanks to standard Apple CarPlay and Android Auto. The Explorer’s standard advanced safety features are on par with those of the Toyota Highlander and include a forward collision prevention system. 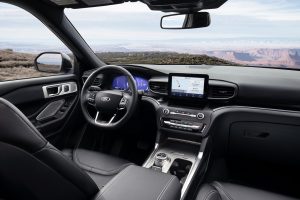 Despite these perks, the redesigned Explorer has a hard time competing with many of its well-rounded rivals that offer roomier third rows, better upgraded infotainment systems, and more stylish interiors while also costing less.

The Explorer is a three-row SUV that seats six people in its standard configuration. The rear seats include a pair of captain’s chairs in the middle row and a split-folding bench with room for two in the third row. An optional second-row bench seat is available in select models, which expands the seating capacity to seven.

Inside, the Explorer feels broad and airy. There is enough legroom in all three rows for adults, though the low placement of the third-row cushion could be uncomfortable for taller passengers. The second-row seats fold and slide forward. These are heavy for small children to move, but little ones can easily jump between the captain’s chairs to reach the rearmost seats. 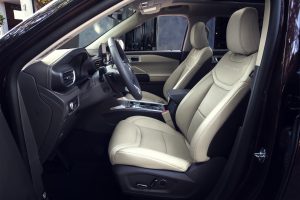 Explorer Interior Quality: This midsize SUV probably won’t win any interior design awards, but it is well-constructed and comes with a nice array of soft-touch materials.

The optional cargo management system includes storage bins underneath the floor and a reversible cargo floor with carpet on one side and vinyl on the other. 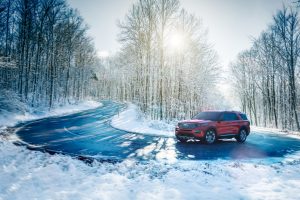 There are four powertrain options for the 2020 Explorer: a base turbocharged four-cylinder engine, two twin-turbocharged V6 engines, and a hybrid variant. We go into more detail on the hybrid’s driving dynamics and fuel economy in our separate Explorer Hybrid review.

The trio of nonhybrid options are lively and smooth. The entry-level 300-horsepower four-cylinder is more powerful than the average base engine in a midsize SUV. So equipped, the Explorer joins highway traffic with ease and leaves little reason to upgrade to the optional V6.

Off-the-line launches are noticeably quicker in any model powered by the twin-turbo V6. The sole gearbox choice is a 10-speed automatic that is responsive and on point. 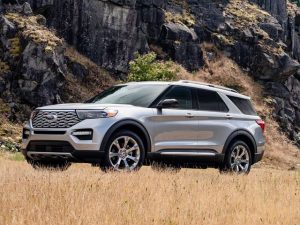 The Explorer comes with either an 8-inch touch screen or a vertically oriented 10.1-inch touch screen. This is one of the rare times when the base system is better than the upgrade. This is partly because of how the larger screen splits to display Apple CarPlay or Android Auto underneath the vehicle’s settings. In theory, it’s a great layout, but in reality, the system isn’t as user-friendly as similar interfaces, like those found in Ram vehicles, for example.

Also, having the larger screen means giving up storage underneath the display, which is otherwise a convenient spot to stow your phone. Ford also gets a few grumbles for its stingy amount of USB ports. There is only one regular USB port in each of the first two rows and no ports for third-row passengers.

Explorer Crash Test Results: At the time of writing, neither the Insurance Institute for Highway Safety nor the National Highway Traffic Safety Administration has crash tested the 2020 Ford Explorer.

Ford MyKey is also standard. This system includes additional seat belt reminders, and it encourages safe driving by letting you do things like set speed and audio volume limits for secondary drivers. It’s a helpful tool for parents of teen drivers.