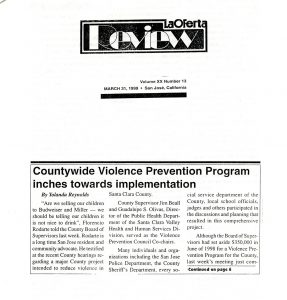 “Are we selling our children to Budweiser and Miller — we should be telling our children it is not nice to drink,” Florencio Rodarte told the County Board of Supervisors last week. Rodaite is a long-time San Jose resident and community advocate. He testified at the recent County hearings regarding a major County project intended to reduce violence in Santa Clara County.

Many individuals and organizations including the San Jose Police Department, the County Sheriff’s Department, every social service department of the County, local school officials, judges and others participated in the discussions and planning that resulted in this comprehensive project.

Although the Board of Supervisors had set aside $350,000 in June of 1998 for a Violence Prevention Program for the County, last week’s meeting just completed a major milestone for getting that program implemented.

In the intervening time there have been numerous community meetings and mounds of data has been collected in order to determine the most effective and responsible manner in which to reduce violence in the community, in particular that involving youth.

The investigation of violence, including youth violence, reveals a number of causes. The abuse of alcohol and, to a slightly less degree, drugs were found to be involved in many incidents of violence. For example, alcohol was involved in 50% of homicides, assaults and other similarly violent incidents in the County. Other factors involve the accessibility of firearms, and the “societal acceptance of family and relationship abuse and violence.” Too often. controlling and abusive behavior is mistaken for “true Love.”

Underlying the above mentioned characteristics, in supporting County documents for the need of a Violence Prevention Program, it is reported that Dr. Deborah Prothrow – Stith, the author of the book “Deadly Consequences” and a recognized authority on the nature of violence, points out that “the disproportionately high levels of violence in certain minority populations are indicators of the underlying economic and social conditions in which the population is likely to find itself.” The report goes on to state, “The devastation of some communities by violence is best understood as a reaction to poverty and to overcrowding in the context of an American culture where violence is as “American as Apple pie.”

County officials have determined that there are three important factors over which they can help reduce the incidence of violence in our communities. These are better control of the use of alcohol, limit the availability of firearms and to promote a societal disapproval of family and relationship abuse.

The ultimate hope is that with improved community education, the strengthening of families, individuals, and communities, and the fostering of personal and social responsibility that altogether such efforts will reduce the high and growing incidence of violence in our communities.

It was determined by many health professionals in the State that the incidence of violence is a health matter. With that perspective, the County agency leading in the development of this innovative and timely program is the Public Health Department. Some very important aspects of the program remain to be decided by the Board — namely additional firearm controls which is vociferously opposed by gun enthusiasts and the powerful NRA (National Riﬂe Association) and the ultimate approval for the expenditure of the money (approved in concept many months ago) in order to finally implement this innovative and much needed program. Another delay, might be the matter raised this last week by Supervisor Don Gage regarding the use of local funds for oversight of alcohol which, he feels, lies within the jurisdiction and budget of the State ABC (Alcohol and Beverage Control) Agency and the Federal government.

Discussions and planning for this massive violence prevention program began May of 1997. Implementation of this plan is urgent and, although no one expects that violence will come to a standstill, it is sincerely hoped and expected to help reduce the incidence of deaths, destroyed families and communities gripped with fear and terror.

The importance of the effort to reduce violence is highlighted by the following statistics gathered in the County: “Approximately 90% of all violence is committed not by strangers, but by friends, family members, schoolmates, coworkers, neighbors or acquaintances. 21,227 cases of child abuse were reported in 1997. In the 1995-96 school year, there were 669 cases of battery reported in schools – 265 of these incidents involved possession of a weapon. In 1996 there were 80 firearm related deaths while another 88 people were hospitalized due to firearm injuries.

Alcohol ranks as the third leading cause of preventable deaths. Fifty ﬁve percent of ninth graders and 65.5 percent of 10th grade youth report alcohol use. Since September of 1998 it was reported that 30 people had died in a homicide. Since that date and as of February 1999, another 12 have died.

Rogelio Balderas, a County Program Analyst with the Department of Alcohol and Drug Services, reminded the Board of the targeting of youth by images of behavior and life styles that compromise their health.

Movies romanticize the use of alcohol, smoking and even the use of drugs at parties, and dates as well as for coping with loneliness, anger or whatever other excuse can be used. Balderas made clear that he was not advocating a ban on alcohol, but he urged the implementation of an aggressive educational campaign that would send a message that there are consequences to the use of alcohol and that, as a group, the alcohol industry should not be allowed to target youth in order to foster a continued customer base. He added, we must make an effort to change the community norm standards and practices concerning the use of alcohol.

Balderas along with Dr. Maria Alaniz, a recognized university scholar on alcohol consumption, co-chaired the Alcohol Policy Sub-committee of the Violence Prevention Program.

Longtime East Side resident and currently President of the Alum Rock Elementary School District, Felix Alvarez, told the Supervisors that several years ago, he and others living in the Mayfair Community had conducted a survey of the number of liquor outlets in that area. They found that there were then 125 outlets within a 1 mile radius of Alum Rock Avenue and King Street, which lies in the heart of a neighborhood, many of whose residents have lower incomes and who are predominantly Hispanic. Since that survey, he found four more outlets have been added to the 125 already there. Alvarez and a group he founded, the Teatro de los Pobres, have been countering the high profile advertisement of alcohol at the many community events traditional within the Mexican-American community.

The Teatro has made known an expression, “Nuestra Cultura No se Vende.” They propose to divert these community events from the wild abandon of a bottle of wine or excessive beer drinking to a sober and joyful celebration, be it Cinco de Mayo, 16 de Septiembre, birthdays, weddings, baptisms or other observances.

A local medical doctor related the story of an 18-year-old female heroin addict and alcoholic patient she had seen that morning. This patient told her that she began smoking at age 5 and now smokes 2 packs a day. In the 6th grade she began to drink beer, in the 7th grade she began to smoke pot by the time she was in the 10th grade she knew she was an alcoholic. She was proud to say that she was careful not to use needles to satisfy her heroin addiction because she feared contracting AIDS.

This example, the doctor pointed out, was proof that the extensive publicity warning of the dangers of needles and the spread of AIDS was an example of a successful educational effort and that a similar program is needed to help reduce the effects of the use of alcohol and availability of firearms in this community, which has resulted in the commission of too many violent acts and created related health problems that are preventable.

Spokespersons for the Catholic Diocese of San Jose urged that the County Supervisors accept and support all of the recommendations that the Violence Prevention Council was recommending. It was pointed out that of the 170 children admitted to County Child Protective Services, 68% of the youth were there as a consequence of alcohol or drug problems in their households. It was pointed out that, of the 68%, 36% involved drugs and 50% involved alcohol. Of these youth, 39% were Hispanic, 34% Caucasian and 8% were Black.

A nurse at the local jail reported that domestic abuse and violence is on the rise here and that, of those involved in such-violence, in 90% of the cases alcohol or drugs are involved. In six of ten of these cases, both drugs and alcohol are involved.

Rosemary Tisch who is involved in “Kids are Special,” a program for youth who live in households where alcohol or drug abuse exists, urged quick implementation of this program. She also pointed out the relationship of drugs and alcohol to the incidence of child abuse. She described various forms of abuse beyond physical abuse, such as the mental abuse that children experience because of a parent’s alcoholism and or addiction to drugs. Many people spoke on behalf of the Violence Prevention proposal.

Mike Fox, a local liquor distributor whose territory includes much of the east side of San Jose, declared that he had been an alcoholic but that, several decades ago, he had reformed. He made it clear that he had a RIGHT to sell alcohol in the U.S. and in California and Santa Clara County. He also pointed out that he was very active in the community as a volunteer and has served on the boards of numerous community based non-profit organizations in the County. It may be added that he is a prominent and generous figure in local politics.

Supervisor Blanca Alvarado urged that the Board of Supervisors also consider some of the recommendations that had been offered by the public. She was particularly concerned that the suggestions made by speaker Maria Elena Chavez be considered, whereby several days of the annual County Fair would be alcohol free and that advertising would be restricted and certainly not given such prominent visibility as is customary at such events. She also recommended that other sponsorship be sought from companies whose products or services are useful to families and youth, such as department stores and computer distributors etc.

The Board unanimously accepted the Violence Prevention Action Plan with the promise that a final approval would be made by the end of March or at the latest by the 6th of April.

Olivas indicated that it will take a concerted effort to obtain grants to make this program effective. She indicated that there are numerous Foundations concerned for the increasing incidence of violence in the country and who also want to find ways to reverse that trend.