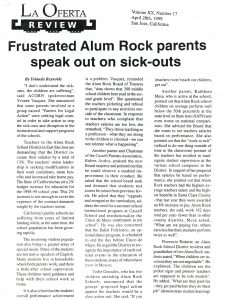 “I don’t understand the sickouts, the children are suffering,” said ACORN spokeswoman Yvonne Vasquez. She announced that some parents involved in a group named “Parents for Legal Action” were seeking legal counsel in order to take action to stop the sick-outs and disruption in the instructional and support programs of the schools.

Teachers in the Alum Rock School District in East San Jose are demanding that the District increase their salaries by a total of 13%. The teachers’ union leadership is seeking modifications in their work conditions, more benefits and increased take home pay. The State of California has set a 2% budget increase for education for the 1998-99 school year. This 2% increase is not enough to cover the expenses of the contract demands sought by the teachers’ union.

California’s public schools are suffering from years of limited funding while, at the same time, the school population has been growing rapidly.

The incoming student population also brings a greater array of special needs. Many of the students are not native speakers of English. Many students live in households where both parents work, and there is little after school supervision. These children need guidance and help with their school work at home.

It is also a fact that the student’s overall performance achievement is a problem. Vasquez, reminded the Alum Rock Board of Trustees that, “data shows that 300 middle school children here read at the second grade level.” She questioned the teachers picketing and refusal to participate in any activities outside of the classroom. In response to teachers who complain that teacher’s salaries are too low, she remarked, “They chose teaching as a profession — what they are doing to the children is criminal – we cannot tolerate what is happening.”

Another parent and Chairman of the Cassell Parents Association, Ruben Avalos, praised the new Board majority and pointed out that he could observe a marked improvement in their conduct. He asked that the school board seek and demand that students test scores be raised from previous levels. He asked that they “upgrade and reorganize the curriculum, address the need for a summer school instructional program at Cassell School and institutionalize the Cinco de Mayo celebration at the school.” He was also concerned that the Ballet Folklórico, an optional dance program, is scheduled to end the day before Cinco de Mayo. He urged the District to recognize the importance of such cultural events to the education of these students, many of whom have roots in Mexico.

Violet Gonzales, who has two children attending Alum Rock Schools, announced that the groups proposed legal action against the teachers would be a class action suit. She said, “If you (teachers) won’t teach our children, get out.”

Another parent, Kathleen Mesa, who is active at the school, pointed out that Alum Rock school children on average perform well below the 50th percentile at the state level on State tests (SAT9) and even worse on national comparisons. She advised the Board that she wants to see teacher’s salaries based on performance. She also pointed out that the “work to rule” (refusal to do one thing outside of time in the classroom) posture of the teachers has resulted in inadequate student supervision at the various school campuses in the District. In support of her proposal that salaries be based on performance, she pointed out that Alum Rock teachers had the highest average teacher’s salary and the highest benefits in Santa Clara County – that last year they were awarded an 8% increase in pay. Alum Rock teachers, she said, work 182 days total per year- fewer than in other county districts. Mesa asked, “What are we paying for- others earn less but their students perform twice as well.”

Florencio Rodaite, an Alum Rock School District resident and grandfather of two Alum Rock students stated. “When children are involved they are not negotiable.” He explained, the children see the picket signs and protest-teachers are supposed to be role models.” He added, “What are they paid for – they get paid before they do their job” (demonstrate student learning/achievement.

He pointed out – that it is these children who will keep the economy going and admonished the teachers to think of their prospects in retirement if these children are not properly educated and thus employed as adults.

One parent stated that she was unfamiliar with the details of the contract negotiations but that, in any case, she was supportive of the teachers.

Following the public comment, the Board discussed the concerns of the parents. Dominic Cortese, newly elected to the school board after many years in public office most recently as a member of the California legislature, remarked that in his 30 years in public service he has observed the hard and important work of organized labor. He stated, however, that, since serving on the Board of the school district, that he was, “struck that in education when you have an action it hurts the kids.” He added, “it is not like a strike in the private sector where a strike of the workers hurts profits or the bottom line.” He concluded “I do not understand the meet and confer process.” He began his remarks with the comment that he has great “respect for organized labor.”

The District has opened its financial ledgers to inspection by an accountant of the teachers’ union. District officials and the Board have said that if savings can be found they would increase their initial 3% increase salary offer. After months of negotiations and several stalemates requiring outside mediation, a resolution has not yet occurred.

In the meantime, Alum Rock students are due for State testing. With the recent laws that were passed in California regarding accountability, student achievement and retention and with the possible censure of districts that show poor performance, severe damage to the Alum Rock District is a likely consequence. Of equal importance and perhaps even more for long term damage, is the lack of proper instruction and attention to a student population that is ready and able to take its proper place in our society. This can only happen if the children are taught, encouraged and nourished at an early age to achieve at admirably high levels, as has repeatedly been demonstrated by many current Alum Rock students. The problem remains that not enough students are doing as well.

Board member Nancy Knight, who also has grandchildren attending the Alum Rock schools, pointed out that, “There has been some progress in the contract negotiations.” She urged the teachers “to participate and help us find where we can save money.” She pointed out with pride, “We have many quality teachers – we do not want rancor after this is over.” With emotion, she pleaded, “Show me how we can save money,” and added, “I have a legal responsibility to keep the District solvent.”

Felix Alvarez stated to the Alum Rock School District community that, “the resolve of the Board is united.” He added that, “The issue is not just teachers but rather the educational achievement of the students and not just some children – we must educate all of the children.” Alvarez stated, “We should be embarrassed for the systemic and historical (15-20 yrs.) problems in the District.” But he added, “That the outcome of this struggle has ultimately been positive.”

In reference to the ‘sick-out,’ Alvarez expressed chagrin that the sick-outs were held at the two lowest performing schools in the District, San Antonio and Cesar Chavez.

Alvarez then turned his attention to the parents and stated that parent involvement must occur at each of the schools, adding that their participation is critical. He stated, “You (parents) are the leadership – we (the Board and school’s staff) are here to serve you – we must learn how to compromise.” He pointed out “We (the Board) have proven our support of the teachers.” He added, “Alum Rock is a ‘low wealth’ District and we must look at how best to use the one pot of money that we have. However, I and the board majority will not compromise the educational goals of the District.” He pointed out that “District staff are doing hundreds of different programs that are important to our children’s performance.”

“We must look at the best interest of all of the District’s children and we must all work together to achieve that goal.” Alvarez asserted. He concluded that what the “teachers now want will jeopardize that goal.” Alum Rock Superintendent, Dr. Santiago Wood never fails to point out that in the Alum Rock School District, “We believe that all students can learn and all students will succeed.”

Alum Rock is the largest elementary school District in Northern California and the 7th largest in California. It serves over 18,000 students. Hispanic students make up the single largest ethnic group in the District. In 1997-98, SAT9 scores for reading, language and math performance for second grade students respectively averaged in the 24, 24 and 30th percentile. The national average in these subjects is 50. The SAT9 scores for 6th grade students of the District’s 6 Middle Schools in reading, language and math were respectively 26, 32, and 31. The national average is 50.

After years of neglect, major investments in quality of life amenities are being made in the general area that the Alum Rock School District serves. That same evening, the San Jose Redevelopment Agency presented plans for the soon to be built “Pala Youth Center.” That Center is becoming a reality because of the collaboration of the District with the Agency for a facility that will allow for a number of school and after school programs to take place in an area that has been bereft of supervised activities for the neighborhood youth. The 17,500-sq. foot youth center will house a gym, a place to dance and provide after school sports and leadership training. It will also contain a homework center, meeting spaces and some onsite parking. In the future, a new library is planned.

Alicia Mota, a resident of the Mayfair area of the Eastside, reminded the RDA (Redevelopment Agency) not to forget her neighborhood. She asked that, at a minimum, the RDA consider the children in her neighborhood who want and need at least a swimming pool and a library. The teachers in California are underpaid but the Alum Rock teachers are paid better than others in the area. The school administration says that it is financially limited but would provide more if the money could be found. For the sake of the children, a solution to the impasse should be found soon.