Villahermosa, Mexico, Dec 4 (EFE).- Armando, 58, is the Santa Claus who every Christmas for the past seven years has plied the streets of Villahermosa, the capital of Mexico’s southeastern Tabasco state in Rodolfo (his taxi) to receive letters from kids and distribute presents and smiles to them.

During his workday and while waiting at red lights in Villahermosa, the cheerful man outfitted in a red Santa suit and black boots, with a white beard and a resounding laugh, happily shouts to passersby “Feliz Navidad!” (Merry Christmas).

Families greet him on the street and those who flag him down give him their best wishes. And he, for his part, charges them between 30 and 50 pesos ($1.50 – $2.50) for the trip, depending on the distance and the type of service they require.

Armando has the goal of delivering 1,000 toys to the same number of kids this Christmas.

This taxi driver Santa Claus says he feels sad that the spike in violence and the “narco-culture” in Mexico have disrupted the innocence of local children who, in their Christmas wish letters, ask him for war toys and mobile devices with violent apps installed.

“They want to be a narco or something like that, and that’s the difficult thing here. It’s scary, but that’s what’s happening with technology today, which we’re not using as it should be used,” he said, adding that in the past he remembers that “every kid dreamed of being a policeman.”

That’s the reason that Armando asked society and the authorities to strengthen moral values in the home and in educational institutions to offer the necessary and respectful attention to children, “who will be the young people of tomorrow.”

“These days the ones who are responsible are the parents. Let’s not blame the teachers for the education of our kids when a child is formed and malformed at home,” he said.

Armando gets up at 7 am to begin his workday, using Rodolfo – named for Santa’s red-nosed reindeer Rudolph – to pick up toys donated by social organizations or families who support his altruistic work. 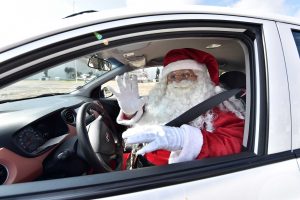 The taxi driver is married and has three grown children and nine grandchildren. Although his wife is in poor health and they have serious economic problems, this generous man works hard to cater to the wishes of local kids.

He said that it all started a decade ago after he participated in social events where, for the first time, he felt the love and joy of a disabled child from a low-income household who received a bicycle as a present from his neighbors.

Three years later, he decided to take on the role of Santa Claus – called “Papa Noel” in Mexico – collecting toys and distributing them in marginal communities, where he presented his first 150 dolls, balls and toy vehicles.

He said that Christmas is the worst time of year for his taxi business and so he doesn’t lose much potential income traveling around town to hotels, schools and elsewhere. But the smiles and the happiness sparked by his acts are the best possible reward.

What he’s doing “is … magnificent, because … there isn’t anyone who’s doing this with passion and love,” said one of Armando’s customers – Alfredo – who hailed the cab for a trip to the Tabasco 2000 trade zone.

After he finishes his work as Santa around Christmas, Armando says he will play Melchor, one of the Three Kings who came to visit Jesus in the manger, along with two friends next January.