Participants aim to stop evictions, save lives in Bay Area county with highest rate of evictions 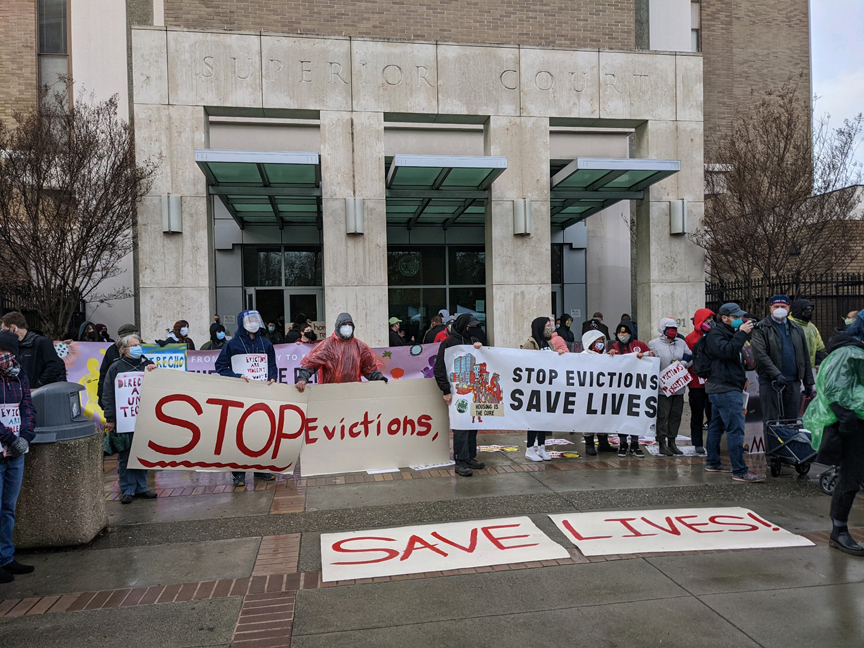 “Tenants throughout the Bay Area are being evicted as many landlords are taking advantage of the loopholes in the County, State, and Federal moratoriums, and the spike in COVID-19 cases can be directly linked to evictions,” said Chad Bolla with the North Bay Organizing Project, an RTO member group participating in the blockade. “Our most powerful response is when we as tenants organize in solidarity with other tenants to stop evictions and save lives.”

The patchwork of inconsistent municipal moratoria, coupled with a statewide eviction moratorium that has been riddled with loopholes, has failed to stop evictions during the pandemic. Santa Clara County ranks highest in the Bay Area for evictions during the pandemic, followed by Contra Costa County. As a recent UCLA research paper shows, evictions contribute to a higher COVID-19 infection rate and a higher number of deaths.

In Santa Clara County, Presiding Judge Deborah Ryan and Sheriff Laurie Smith have done little to prevent evictions. Judge Ryan has failed to adopt the Housing Collaborative Court model, a common-sense model adopted by other presiding judges that aims to avoid using evictions to solve negotiable issues between landlords and tenants. Sheriff Smith, also unlike other county sheriffs in the Bay Area, has been enforcing lock-outs during the pandemic. Through their decisions, these two officials have contributed to the high eviction rate in Santa Clara County.