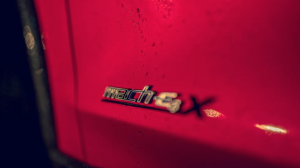 This is a Mustang like you’ve never seen before. Bucking the tradition of muscular two-doors, the all-new Ford Mustang Mach-E is a four-door electric crossover. But this isn’t meant to be the tree-hugger’s Mustang—the Mach-E emphasizes performance and technology.

Still, the Mach-E needs to achieve good electric driving range and provide an exciting way to live a fuel-free lifestyle. It’s a radical re-imagining of the classic Mustang, and a glimpse at Ford’s electric future. The Mach-E competes with other affordable electric SUVs including the Chevrolet Bolt EUV, Volkswagen ID4, and Tesla Model Y.

After making its debut at the end of 2020, Ford’s all-electric SUV is getting a new performance variant. The 2021 Ford Mustang Mach-E GT is Dearborn’s direct answer to the Tesla Model Y Performance. It offers more power and better handling than the standard Mustang Mach-E, all wrapped in a slightly sharper and more eye-catching package thanks to a handful of visual tweaks. The Mach-E GT carries over the regular model’s premium look and feel too.

Outside of the Tesla Model Y, the Mach-E competes against an ever-growing number of rivals. Those include the Audi e-tron and e-tron Sportback, the Jaguar I-Pace, the Volvo XC40 Recharge and the Polestar 2. Outside of the Tesla, no one can really touch the Mach-E when it comes to performance or price. While we were hoping for a little more performance out of the GT model, it’s still plenty quick and entertaining. Check out our Expert Rating for more about the Mustang Mach-E GT’s performance, comfort, pricing and real-world range. 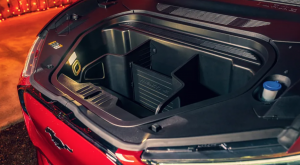 How does the Mustang Mach-E drive? The Mustang Mach-E GT Performance is the sportiest version of Ford’s all-electric SUV. While we enjoyed the way it drove, it didn’t quite live up to our expectations. Its 0-60 mph time of 3.8 seconds makes it much quicker than other Mach-Es and puts it just 0.1 second behind the Tesla Model Y, but Ford limits maximum acceleration to just 5 seconds. Power trails off, and the Mach-E GT will fall behind the Model Y the faster you get going. Frankly, it’s disappointing for any vehicle with “Performance” in its name.

The Mach-E GT handles well both on the street and at the track, and it’s a couple notches up from other Mach-Es we’ve tested but not worlds apart. The adaptive MagneRide suspension and direct steering keep it planted, but it isn’t as lively as we were hoping. That said, braking performance is excellent. The Mach-E performed well in panic-braking situations, and the regenerative braking allows for one-pedal driving. The steering feels light at low speeds, making it easy to park.

How comfortable is the Mustang Mach-E? The Mustang Mach-E GT errs on the sporty side of comfortable. The ride is firm around town but not harsh, and we didn’t have any complaints after a nine-hour day behind the wheel. A lot of credit goes to the Mach-E GT’s seats. They’re well padded and provide good support, though a bit more bolstering would help improve the GT’s sporty feel. The rear seats are comfortable, though the padding feels a bit firm. 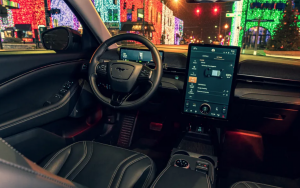 It’s pretty quiet on the road, too. Wind and road noise is mostly isolated, though the tires occasionally roared on certain highway surfaces. There’s an optional powertrain noise that gives the Mach-E a bit of a spaceship aura, but it can be disabled.

How’s the interior? Ford doesn’t make another vehicle that looks and feels quite like the Mustang Mach-E inside. The overall design is clean, and the large center screen commands your attention. It’s used to control most major functions and settings. The menu system is intuitive and well organized, though it can occasionally be slow to respond to inputs.

Getting in and out of the Mach-E isn’t too difficult, even with the sleek roofline. The doors open fairly wide, and the seats aren’t overly low or high. The push-button door handles are neat too. The driving position is upright, though you don’t feel like you’re too high even with the seat’s limited adjustment. Outward visibility is limited by the narrow rear window, but the view forward and over your shoulder is fairly good.

How’s the tech? The Mustang Mach-E offers some of the latest and greatest in-car tech Ford has to offer. The 15.5-inch touchscreen display features an excellent navigation system as well as standard wireless Apple CarPlay and Android Auto smartphone integration. There’s a wireless charging pad too, though it couldn’t charge our phones quickly enough to keep up with wireless CarPlay. Ford includes both USB-A and -C ports that will charge your phone quickly. Following Tesla’s lead, Ford offers over-the-air updates that should make dealer visits less frequent. 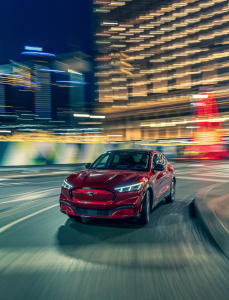 How’s the storage? The Mustang Mach-E features an excellent amount of cargo space and cabin storage. There’s 29.7 cubic feet of cargo space behind the second row. That can expand to 59.7 cubes with the second row folded down. That’s good, but Tesla offers more storage in the Model Y. That’s true of the front trunk too, which is smaller on the Ford than the Tesla. We do like that the Mach-E’s features a drain hole, meaning you can fill it with ice at a tailgate. Storage in the front of the cabin is good, with a spacious center console and shelves under the center screen.

Installing a car seat won’t be too difficult, though the anchors aren’t as easy to access as in some other SUVs.

How are the range and efficiency? The Mustang Mach-E GT Performance has an EPA-estimated electric range of 260 miles (increases to 270 miles if you opt for the standard GT) and an efficiency of 41 kWh of battery energy per 100 miles. Energy use is on the high side considering the Model Y Performance is rated to use just 30 kWh for every 100 miles.

In Edmunds’ real-world range testing, we saw 273 miles from a single battery charge. While it’s great that the GT Performance achieved its EPA range estimates, it didn’t exceed it by the same margin as other Mach-Es we’ve tested. We also observed better efficiency of 37.4 kWh/100 miles in our tests, but that’s still a fair amount off the Model Y’s observed efficiency of 29.6 kWh/100 miles.

Is the Mustang Mach-E a good value? For the most part, the Mustang Mach-E doesn’t look or feel like anything else Ford is building today. The interior is clean and has a premium feel you won’t find elsewhere, even in the regular Mustang. Keep looking, though, and you’ll see buttons and knobs shared with other Fords. The steering wheel buttons in particular undercut Ford’s intentions.

The Mustang Mach-E GT starts at $61,000. Our as-tested price of $69,800 before the tax credit included the Performance Edition package. That lines up neatly with the Model Y, though the Ford vehicles still qualify for the $7,500 federal tax credit. Ford offers a three-year/36,000-mile basic warranty plus a five-year/60,000-mile powertrain warranty. That doesn’t include the battery, which is covered for eight years/100,000 miles. The basic and powertrain warranties are less that what Tesla offers. Ford does offer five years/60,000 miles of roadside assistance, more than other automakers.

Like the regular Mustang Mach-E, the GT is a sharp-looking vehicle. There’s enough visual difference between the models that you know the GT is something special, especially in our test vehicle’s optional Cyber Orange Metallic paint. It was turning heads all over town, all the more impressive as it doesn’t really make any noise going down the road.

We just wish it were a bit more fun. That’s not to say that the Mach-E GT is staid in any sense — it’s that it doesn’t feel appreciably different than the regular Mach-E once you get moving. The GT is quicker, sure, but the limited amount of time you can exploit the extra power saps the potential joy out of it all.

Which Mustang Mach-E do recommend?

If you’re going for the GT, we suggest opting for the Performance Edition. It includes upgraded front seats, a sharp-looking set of wheels and an adaptive suspension. We also recommend Ford’s excellent Co-Pilot360 driver aid suite.