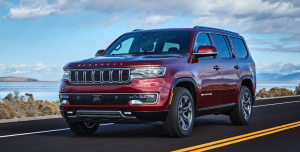 The Jeep Grand Wagoneer is the first American full-size luxury SUV. It dates back to 1984, when it was borne out of the standard Wagoneer that had been a part of the Jeep lineup since 1963.

Now a new Grand Wagoneer makes its return. This new 2022 Grand Wagoneer, which arrives this fall and is built upon a rugged ladder frame with independent rear suspension, will compete for buyers in the premium large American SUV segment. This is a market that includes the Cadillac Escalade, GMC Yukon Denali, and the Lincoln Navigator.

The new Grand Wagoneer looks well prepared for this battle. A 6.4-liter V8 with 470 horsepower powers it. It has the Quadra-Drive II 4WD system and the Quadra-Lift air suspension. It’s fitted with the most luxurious 3-row interior we’ve seen in an FCA (or Stellantis) product. 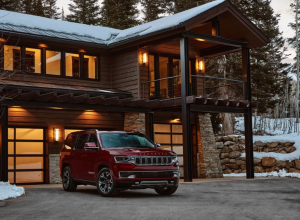 Given its rugged body-on-frame construction and its powerful 6.4-liter V8, the new Grand Wagoneer is an opulent family hauler that can work — its max tow capacity is an impressive 10,000 pounds.

The Wagoneer is new for Jeep for 2022, but it’s hardly a new name for the brand. The Wagoneer name badge first appeared in 1963 alongside that of the luxurious Grand Wagoneer SUV. It was also used on a trim level for versions of the brand’s Cherokee and Grand Cherokee models in the 1990s.

The Series II Premium model is the one to get. It adds quite a bit to the bottom line, but for that increase in price buyers are treated to nicely-styled 22-inch wheels, a secondary infotainment display for the front passenger, a dual-screen rear-seat entertainment system, a panoramic sunroof, a self-parking feature, a 360-degree exterior camera system, and a head-up display. 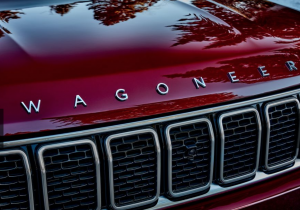 All Wagoneer models come with a 392-hp 5.7-liter V-8 engine which is supported by a 48-volt hybrid system and offers a cylinder deactivation feature to help save fuel. An eight-speed automatic transmission is standard but buyers seeking to unlock the Wagoneer’s off-road capabilities will want to add four-wheel drive to their order sheet; rear-wheel drive is standard otherwise. Speaking of four-wheel drive, there are three different systems to choose from, all with varying degrees of capability.

Other available off-road features include an adjustable air suspension that can raise the Wagoneer to provide an additional 3.6 inches of ground clearance, and a drive-mode selector system which includes sand/mud, snow, and rock modes. Both rear- and four-wheel drive variants of the Wagoneer will be rated to tow up to 10,000 pounds. On our first test drive, we noted that the Wagoneer’s somewhat top-heavy handling doesn’t inspire the driver to zip through curves but its softly-tuned suspension delivered a smooth ride when cruising on the highway. At our test track, the big lug managed a fairly brisk 6.7-second run to 60 mph. Stopping from 70 mph was a different story as the Wagoneer needed a long 197 feet to come to a complete stop from that speed.

According to the EPA, the rear-wheel drive Wagoneer is the most efficient one, with ratings of 16 mpg city and 22 mpg highway; going with all-wheel drive drops those estimates to 15 mpg city and 20 mpg highway. We haven’t had the chance to test the SUV on our 75-mph highway fuel economy route, but we’ll update this story when we have results to to share. For more information about the Wagoneer’s fuel economy, visit the EPA’s website.

A spacious three-row cabin can be equipped with seating for up to eight in the Wagoneer but opting for second-row captain’s chairs reduces seating to seven. The cabin design is rich and features plenty of standard luxury items, such as leather upholstery, 12-way power-adjustable front seats, ambient interior lighting, and three-zone automatic climate control. Buyers seeking the ultimate in luxury will want to pony up for the more expensive Grand Wagoneer, but we think most will find the offerings in the regular Wagoneer suitably upscale. Cargo space is generous, particularly with the third row folded, but we won’t know exactly how many carry-on suitcases it can hold until we can get a Wagoneer into our office for testing. 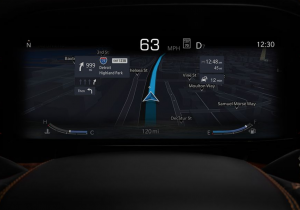 The interior of the Wagoneer is covered extensively by screens, with a 10.1-inch infotainment display taking center stage and a 10.3-inch digital gauge display offering readouts for the driver.

Even the front-seat passenger can have their own display—an optional 10.3-inch unit—integrated into the dashboard that provides access to navigation and entertainment functions. 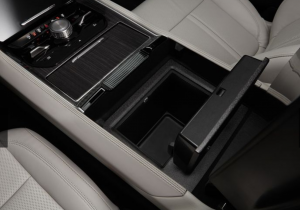 Jeep currently offers a competitive albeit unremarkable limited and powertrain warranty. However, the company does give all models three years of free maintenance.