The N.A.H.P. (National Association of Hispanic Publications) President and Board of Directors (which is made up of the Regional Directors of the organization) held their national quarterly meeting last week for the ﬁrst time ever in San Jose.

At a was conference, at noon Friday, the N.A.H.P. leadership announced that Association member publications would be making every effort to counter the attack on Afﬁrmative Action and the continued attacks on immigrants. Luis Rossi, the N.A.H.P. President, also pointed out that the large mainstream media giants were now eying the large and growing Hispanic readership. Such competition could have a very negative impact on the small, usually family owned, publication that now serve that community.

In the local daily it was mentioned that it and other major companies are considering publishing a Spanish language issue. Rossi pointed out that they wished to capture the advertising dollar of the large Spanish speaking market.

Obviously, it is this advertising revenue that allows Hispanic publications to meet their expenses just as it does for the mainstream media-subscriptions help by a very small amount, and primarily serve only to add a little to the advertising revenues.

Luis Rossi, Publisher of La Raza weekly newspaper based in Chicago, Illinois said that California was chosen for the meeting this session because it “led the nation in and anti-immigrant initiatives” and that the membership of the N.A.H.P. was taking a strong position of opposition to such activities.

Andres Tovar, the Board member representing Region 1 (Washington D.C. area) and the Publisher and CEO of National Hispanic reporter pointed out that the recent efforts to make opportunities available for those who have been excluded front education and the workplace are needed to correct over two hundred years of discrimination and that affirmative action has worked, but that there is still much to be done.

He added that, “white” men held 99% of the top positions in the corporate America. In the workplace, Hispanics make up only ﬁve percent of “those working while they make up 10% of the population. Hispanics, African Americans and most other minorities are greatly underrepresented in academia and most jobs in the workplace that offer high wages and professional growth.

Tovar explained that Affirmative Action has provided a vehicle by which employers are held accountable to the task of supporting the national objective of eliminating discrimination in the work place.

Tovar explained that, without Afﬁrmative Action he would not have had the opportunity to attend college as a youth. He added that, “others should not be threatened by Affirmative Action – it is only a way to offer a helping hand in order for more people to become full partners (in life in the United States).”

Tovar reminded the press that, “even though some students were admitted who did not have the top grades in the admitted pool, they all had to complete the requirements with passing grades in order to graduate.” He added, “we must keep the door (to higher education) open.” 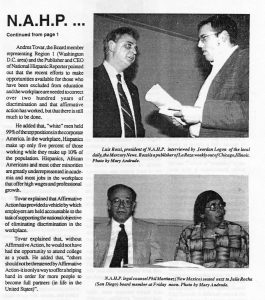 President Luis Rossi expressed feelings that so many feel, especially those people who have willingly immigrated to the United States, when he stated that, as a recent immigrant, (20+years) he was able to apply for a federally funded business loan that allowed him to begin a publication which over the years, has grown to be one of the country’s most successful Spanish language publications employing 60 full time. That opportunity and the reward which he has gained from a little help and a lot of work is a manifestation of the “American Dream.”

The United States and its people have always prided themselves in, “being the land of opportunity. A place where every vote counts, and justice and equal opportunity are held in the highest regard.”

Kevin Kennedy, board member and publisher of El Sol del Valle in Sanger-Fresno, Ca., pointed out that the CCRI (California Civil Rights Initiative), which will reverse Affirmative Action legislation in the State, is “nothing more than an attempt by some politicians to divide Americans and exploit fears to the detriment of everyone. He added they are not demonstrating leadership but are, instead, poll watchers creating wedge issues and raising fears in order to win elections.”

Kennedy suggested that the nation must continue the “current trend in which business and industry are recognizing that diversity is good for business.”

That is one reason why major mainstream media are considering paying attention to the Hispanic market. Their success will be determined by how well they understand what they are doing.

In a recent article in the local daily, their reporter stated that (Hispanic) publishers, “consider their mission to include reporting with a point of view, rather than strict neutrality and say they will use their publications to warn Hispanic voters about the dangers of doing away with affirmative action.”

Unfortunately, the local daily has its peculiar ideas about what it considers to be “neutral” reporting. For them, it seems to include a daily barrage of attacks on the Alum Rock School District Trustees, especially Alex Salazar. The lack of “neutrality” by the local daily is demonstrated almost every issue in a variety of issues both national and local.

For example, an American 0nline message from San Josean Dale Warner to the Publisher of the local daily pointed out that the same week a number of questionable school board meetings by the Trustees took place at 8 o’clock in the morning with actions taken contrary to the Brown Act. These meetings were not covered by the local daily.

Warner also pointed out that the local daily has hardly covered the recently released Grand Jury report on Redevelopment that found that much of what is going on in that agency with the full approval of the Agency Board/City Council, is deﬁnitely outside the “intent of the law.” Agency activities have caused the removal of hundreds of Hispanic families from the downtown area of San Jose.

Alum Rock School District has had one of the highest paid teaching staffs in the State while, at the same time, it has had sortie of the lowest student test scores in the County. It was only under the recent majority of the Alum Rock Board which, is so highly criticized by the local daily, did that District avert an impending bankruptcy. They also reversed the intended sale of Alum Rock School District land required by state law to provide adequate room for students for the controversial Redevelopment funded Mexican Heritage Gardens. The local daily has not revealed these facts seemingly because they go against the position they approve. Most readers, Latino or not, would find that this absence of information would not reflect “neutral reporting.”

Julie Rocha, the Board member representing Region 9 and publisher of “El Sol de San Diego” says, “main stream media is not doing its job.”  She adds, “all they write about is entertainment, sports., illegal immigration and gangs.” She added, “competition is all right, but unfair business practices will not be ignored.”

The N.A.H.P. member publications have grown steadily under the leadership of Rossi. An informed group of publishers from around the country who serve on the Board also help to provide the journalists of the

100 member newspapers not only a forum for professional interaction but a way to alert and inform the many thousands of readers in the communities they serve regarding issues, news, and features of interest to the Hispanic/Latino.

N.A.H.P. legal counsel, Phil Martinez stated that on behalf of the Association he is looking at anti-trust laws regarding unfair business practices. © La Oferta Newspaper.